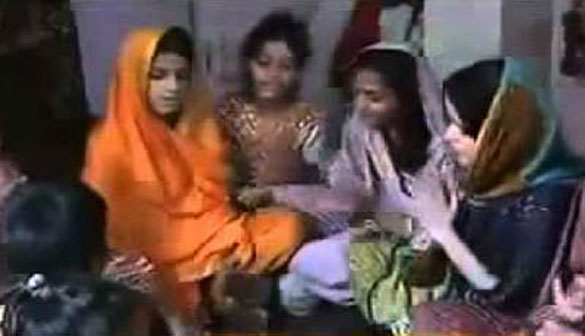 •  Veena Malik back as host on special Ramzan show

•  Spotlight On Hijab and Bikini at the London Olympics

•  Women Can Choose To Wear The Burqa – But Can They Choose Not To?

Photo: Pakistani Sister in Disputed Marriage Gunned Down In Court by Her Lawyer Brother

So-called honour killings by families who believe their daughters have disgraced them are increasingly common in Pakistan. But the gunning down last week of a woman by her brother, a lawyer, in front of dozens of witnesses in a packed courtroom in the bustling city of Hyderabad marks an alarming new low.

The family of 22 year-old Raheela Sehto had already made their fury at her marriage to Zulfiqar Sehto – a love match struck without their permission – abundantly clear. They reacted by filing a claim with local police that their daughter had been kidnapped by her 30-year-old husband, a life-long neighbour who had wooed Raheela over the years, although largely through clandestine mobile phone conversations.

Her uncle had tried to throttle her with a scarf at an earlier appearance at the high court in Hyderabad in July. The couple had petitioned the court for its protection and to try and have the kidnapping charges thrown out.

But Sehto, a university graduate working for the local electricity company, said they felt they had no reason to fear for their lives in court, even when in the earlier part of the morning he was sitting almost directly in front of his wife's eventual killer, Javed Iqbal Shaikh, her brother.

Shortly after the two judges had returned to their seats after a break, Shaikh, dressed in the black suit and tie of his profession, produced a gun he had smuggled into court, lunged at Raheela and shot her point-blank in the left side of the head.

"Before she fell to the ground, my wife was looking straight at me," said Sehto. The gunman, Shaikh, then tried to shoot Sehto, but was overpowered by police.

Although furious families have succeeded in killing their daughters in police custody before, it is the first time such an incident has occurred in open court.

The killer managed to evade security checks, including two sets of metal detectors and body searches, because he was one of the country's obstreperous lawyers – an entitled group that has been known to assault policemen violently.

"The lawyers, they don't like to be searched," said Amjad Shaikh, a police superintendent in Hyderabad, the main city in Pakistan's southern province of Sindh. "Security is a little bit of a problem there."

Apparently unrepentant, Shaikh gave interviews to journalists later, while in custody, saying he had "lost my mind".

"I did that in rage because she had dishonoured the family," he said to a Pakistani newspaper. Four other family members who accompanied him in court have also been charged over the killing.

"Everyone is very shocked by this because it happened in an educated family," said the police officer. "Normally, honour killings happen in the rural areas where people are not educated."

In the countryside such crimes can even be given the imprimatur of local "jirgas", informal and illegal justice systems run by communities that enforce tribal lore.

The superintendent added that the involvement of the Shaikhs was also unusual, saying they are known for being "peaceful".

The Shaikhs of Sindh, originally migrants from neighbouring Punjab, tend to enjoy high levels of education, are traditionally involved in trade and are little connected with tribal custom.

According to the latest survey of violence against women by the Aurat Foundation, a rights group, there were 2,341 honour killings in 2011 in Pakistan – a 27% jump on the year before. The report also said there were more than 8,000 abductions and 3,461 rapes and gang rapes.

But the figures were just "the tip of the iceberg", it warned, saying researchers relied on those cases that were reported in the media only.

Amar Sindhu, a professor of philosophy at Sindh University and a women's rights activist, said the phenomenon was less to do with "cultural and social practices" and more to do with "the complete absence of the rule of law".

"Even in the 19th-century, the colonial authorities were able to reduce these crimes by enforcing laws when social, cultural and religious practices were just as male dominated and anti-woman as they are today," she said.

Sehto struggled to speak as he described the loss of his young wife, whom he had known for almost his entire life, growing up in the small town of Behlani.

"She was my neighbour and we went to each other's home since we were children," he said. "We began to fall in love more than 18 months ago, but they kept refusing my family's request to marry her."

Raheela agreed to elope with Sehto only after her father attempted to marry her off to a Shaikh from Punjab whom she did not know, he said.

His family has now left Behlani, and he said he will never return.

"All I want is justice, I want the court to convict Javed and his accomplices with the death penalty," he said.