European Women in the Caliphate

It is one of the countless messages that Anna Smit - not her real name - sent to her daughter. The last time she spoke with Aisha was six months ago during a telephone conversation in late March. The 18-year old Dutch Muslim told her mom that she was happy with her newlywed husband in Idlib, Syria, but that she really missed her. The connection was bad and there was a lot of noise in the background, including the voice of her daughter's husband, who constantly interfered with the conversation. After that, Facebook messages and text messages remained unanswered.

"I’m planning to travel to Syria by myself, even though I don’t know where she is,” Anne cries. “I feel like my heart has been ripped out of my chest. I cannot live without my daughter. What if something happened to her?”

It all started in February, when Aisha announced she wanted to go on a holiday to Turkey with her friend. Anne found it kind of strange to go there in the middle of the winter, but didn’t think much of it, until she got a warning from a male Muslim who told her that her child was on the verge of travelling to Syria.

"I confiscated her passport, called the secret service, the anti-terrorism department... I did everything. But Aisha requested a new ID card and on the same day she received it, she took off. By train, because those jihad recruiters arranged her trip perfectly,” Anne told Middle East Eye.

The mother claimed that Aisha had "psychological issues." Anne even took her to the doctor twice to ask for hospitalization, but the doctors refused. She and her daughter were really close, she explained, despite the disagreements they sometimes had about Aisha's strict interpretation of the Qur’an after she converted to Islam in August, 2013.

"One day she was walking with the Bible under her arm, and the next day it was the Qur’an she was holding," Anne said, adding that she didn’t get any help from the Dutch government in her search. "They consider her to be a terrorist, but she is a victim instead."

The US State Department estimated that 12,000 foreign fighters from over 50 countries have gone to fight in Syria, with 3,000 fighters from across Europe. However, global statistics about European women who join militant groups remain unknown. According to the National Coordinator for Counterterrorism and Security (NCTV) in the Netherlands, around 20 women with Dutch nationality went to Syria, but experts estimated this number to be much higher due to the current developments in northern-Iraq and Syria. A very large majority of them joined the Islamic State (IS). 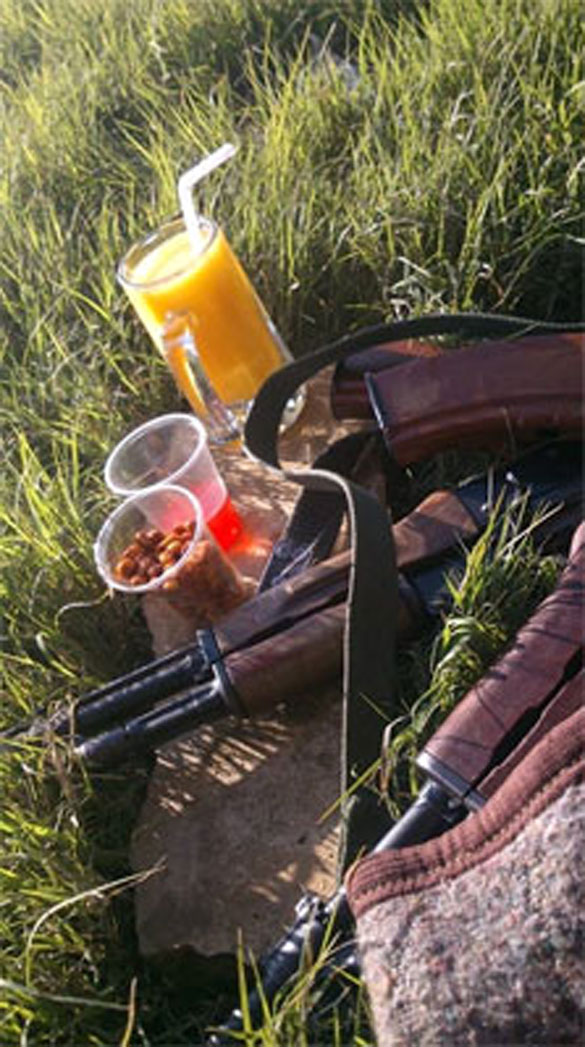 Women sharing pictures of breakfast in the 'caliphate' (Facebook)

There are various reasons why young Muslim women travel to Syria. Some of them are motivated to contribute to the creation of a caliphate and go with their husbands, while others marry a militant fighter whom they have met over the internet. Aisha also got in contact with her husband on social media after he made an appearance on a Dutch news channel. The way he explained his motivations for 'jihad' appealed to her. The fighter -who allegedly has a high rank within Jabhat al-Nusra, promised Aisha to set up an orphanage in Syria where she could work, according to her mother. The two got married over Skype.

Aisha is not the only female from the Netherlands who travelled to Syria. Sara, an 18-year old girl, radicalized after she became friends with Salafist Muslims. She began to cover herself with a face veil. That resulted in insults on the streets, even from Muslims, many of whom consider the full black veil an extremist type of clothing that is not required in Islam. In January, she went to Syria and got married to a Belgian fighter called Brian de Mulder.

Devastated by the fact that her daughter - who was 17 at that time - travelled to a war torn country, Sara’s mother wrote a letter on an online Muslim newspaper, describing how her daughter was being recruited and how she feared that people are taking advantage of her. Sara responded on her own Facebook page, saying she was “not coerced in her decision.”

"Muslims do not want to be humiliated in a kuffar (infidel) country where our rights are being violated. I left my country with a big smile, and I don’t care that the Dutch government doesn’t want me back," she wrote.

Most of the European women who travelled to Syria live in the city of Raqqa. The IS took over this town in eastern Syria since March of last year. Soon after that, Raqqa has become the headquarters for militants in Syria and northern-Iraq with fighters from all over the world.

"I counted so many foreign women. At least 10 from the Netherlands only, and even more from other countries. They often live together in big houses of residents who have fled the town," a local activist from Raqqa who calls himself Faress told Middle East Eye over Skype.

He added that he doesn’t know for sure, but that he has a strong feeling that some of those foreign women are being held there against their will.

On Facebook, European women share pictures of their daily lives in the 'caliphate.'  These pictures include breakfasts next to a Kalashnikov, sunsets and male fighters, who often are being photographed with cats, kids or guns.

Occasionally, the women call for others to join them in Bilaad al-Sham. Umm Haniefa, a Belgian woman who joined her militant husband in 2013, posted a status saying that that "the men need women to take care of the kids and the household," and that it "doesn’t matter if they are divorced, old or young or with or without kids." Muslim women who are interested, can contact her in a private message, she wrote.

Montasser AlDe'emeh, a researcher studying European militant fighters at the universities of Antwerp and Leuven in Belgium, believes there are various reasons why European women join radical groups. The rise of right-wing parties - often anti-Muslim - in Europe is one factor, as is the women's difficult childhood or psychological problems.

"These girls feel there is no place for them in society, as they are being rejected by everyone, including Muslims. By contacting Muslims who feel the same way, they try to fulfil needs such as love, recognition and sisterhood," he explained to Middle East Eye.

Montasser added, "In general, girls do not go there to fight. They go there to live under Islamic ruling, so you can consider it an 'immigration'. And after Abu Bakr al-Baghdadi declared the caliphate, more women are ready to leave, believe me.  They are looking for a religious man who wants to go there or who already lives there. Some even go with their entire family."

Anne maintains contact with Dutch and Belgian women in Syria, who found out that Aisha divorced her husband and married another fighter in Raqqa. Unfortunately, nobody has heard from her ever since.

"I already got permission from the IS to go and look for her if I become a Muslim," Anne told Middle East Eye. "And if they don’t let me go? Well, I just want to see my daughter, even if that means I cannot return."

While some fighters actually do return to the West, there are few reports on women who have gone back to Europe. In those spare moments they talked to each other, Aisha told Anne that she was not allowed to travel without the permission of her husband.

In Europe, there are growing concerns that European radicals will parlay their experiences in Syria into terrorism back home. Therefore, governments are considering or already carrying out a raft of measures which will help counter the threat posed by European militants fighting in Syria and northern Iraq, including barring these citizens from re-entering, seizing passports of suspects before they depart and arresting potential militants. But despite these efforts, IS is still drawing growing numbers of young European citizens, including women.

In late July, 19-year old Umm Abdurrahman - as she calls herself on Facebook - posted a picture of her driver’s license. A few days later, she shared pictures of herself walking in the Dutch streets and a plate of sushi, followed up by a question on where she should spend her next holiday now that she finally has her license.

However, on August 10, she posted a picture of herself, fully covered, saying she arrived safely in Menbij, a town in Syria.

"Allah has blinded the Kuffar [infidels], like I asked him in my prayers, although I was asked to come to the police station first. Sisters, do not hesitate and come! It feels so good, like I've always lived here."

On August 12, Umm Abdurrahman proudly wrote that she got married, adding that she lives in freedom. In Syria, she can wear Islamic clothing without being stared at and live under what she views to be Sharia law. By the surprised remarks on her Facebook page it can be concluded that nobody, not even her parents or close friends, were informed about her plans.