Malala and the West

WHEN Malala Yousafzai won the Nobel Peace Prize on Oct 10, 2014, half the country exploded in joyous celebration, half exploded in outraged condemnation, and half exploded in studied indifference. No, the numbers don’t add up correctly, but Pakistan has never been a country in which logic plays a great role in our political and social discourse, so why should my mathematics make sense either? 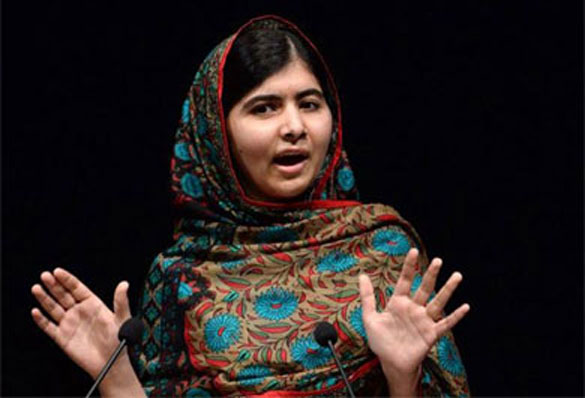 This is why the idea that drones are bad, therefore Malala doesn’t deserve the Nobel is doing the rounds on social media, in the drawing rooms of the rich, and the minds of the middle class. It’s only the poor girls of Pakistan, inspired by Malala’s example and now her exceptional win of a major world award, who seem to think Malala’s story of courage and her determination to turn a near-death experience into a life-affirming message has any bearing on their lives.

Much of the dismay at Malala’s Nobel Prize win is encapsulated in an essay written last year by one Assed Beg, a British journalist. In ‘Malala Yousafzai and the White Saviour Complex’, he argues that “the West” saved Malala from death and the “West” has made her a shining example of their generosity in order to assuage their guilt about the imperialist wars they are waging in the Muslim world. This essay has been presented to me at least half a dozen times as evidence that Malala’s global campaign for girls’ education is a Western conspiracy.

Then there’s another essay making the rounds, “Why I can’t celebrate Malala Yousafzai’s Nobel Win”, on a blog called Middle East Revised, which speaks of Western hypocrisy in killing other girls in other parts of the Muslim world, including Iraq, Syria and Afghanistan.

“Malala’s story fits into the narrative of oriental oppression (in which the context of the oppression is left out),” writes the author. Secret agendas, occupations, drone strikes are conflated with Malala’s Nobel win, making the assumption that these dirty wars lessen its significance, or corrupt it altogether.

The ‘white saviour complex and Malala’ theory is wrong on many levels. If we’re going to be technical about it, it wasn’t “the West” that physically saved Malala. That was the Pakistan Army, whose doctors gave her life-saving treatment in four different hospitals before she was airlifted to the UK for further treatment. Malala survived being shot in the face because of their care, the support of her family and her friends in the UK government, mainly Gordon and Sarah Brown, and her tremendous will to survive.

Assigning her miraculous recovery to “the West” is an accusation that has more to do with the accuser’s insecurities and complexes than any “white saviour complex.” Some people in “the West” disagreed with Malala’s being flown to the UK and treated there — at the Pakistan government’s expense, not the UK taxpayer’s.

Hawks in the US government don’t think about Malala Yousafzai as they plan their attacks on the Islamic State or the Taliban. The argument is a clumsy attempt to bend the anomaly of Malala Yousafzai’s exceptional life circumstances, and to make it fit that anti-imperialist, anti-West worldview.

Certainly people of conscience in both the West and the Rest should continue to examine the issue of imperialism, but not at the cost of negating Malala’s Nobel win. As Damon Lynch commented on the second essay, “warmongers will always try to exploit a Malala because that’s what they do — they take all that is honourable and noble, and selfishly twist it to their nefarious ends. We should expect that, and we should never give up fighting it”.

But we in Pakistan must guard against conflating the Nobel Peace Prize, and more importantly, the global struggle for girls’ education, with the wrongness of drone attacks. This keeps Malala and girls like her in a state of permanent victimhood, and it minimises the dire situation they are in because of lack of access to education.

By dismissing Malala and her work as somehow “tainted” by the West, we blur the lines between the two issues. We give ourselves the excuse to continue to espouse an anti-Western stance that equates girls’ education with secularism and “the West”.

Girls in Pakistan were being kept from going to school long before drones were invented. If drone attacks were stopped tomorrow, 13 million girls would still be out of school in our country today. Let’s forget about the politics of drones and imperialism and think about that for at least a moment longer than it takes to say ‘I hate Malala’. The West may deserve your hatred for all that it does in the world, but does Malala really deserve your hatred for wanting all girls to go to school? Use your logic to answer the question, and it will all start to make sense.

Bina Shah is an author.