No fashion faux pas here: everything in the collection is beautiful – and halal

Muslim women’s clothes are once again in the spotlight, in a week where the European Court of Human Rights has upheld France’s ban on Burqa and Niqab. But there’s another controversy taking place around how Muslim women dress themselves, and this time, it’s DKNY’s Ramadan Summer 2014 collection, styled by two Middle Eastern women: Yada Golsharifi, fashion editor of Styles Magazine; and Tamara Al Gabbani, a fashion designer in Dubai. 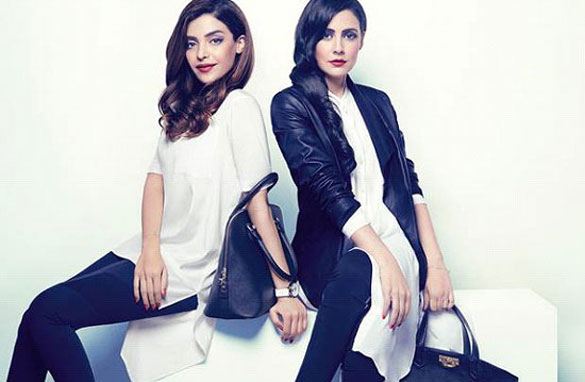 The collection includes long, flowing dresses, skirts, and jumpsuits; long-sleeved shirts, coats, and even a three-quarters-length leather jacket. The result: outfits that are effortlessly chic, fresh, and elegant, and inspirational for Muslim women looking for ways to be glam and modest at the same time.

The fact that this collection has been styled by Muslim women who are professionals in the fashion industry is a brilliant move on the part of DKNY: these women aren’t just experts in their field, but they know the context and requirements of the women the collections are aimed for. No fashion faux pas here: everything in the collection is beautiful – and Halal. Arms and legs are covered, necklines refrain from plunging to JLo levels, and silhouettes are draped with slips so limbs don’t show in the light. The fabrics drape around the body, encasing the curves that nature gave Middle Eastern women without making them obvious, or attempting to disguise them in bag-like Abayas. They walk the fine line between cosmopolitan and conservative, luxurious and ostentatious.

But wait. There must be something wrong with wanting to spend huge amounts of money on designer clothes during Ramadan – after all, this is the month of prayer and reflection, of fasting and charity, of austerity. Isn’t it crassly materialistic to drop a thousand dollars or more on this kind of clothing, in this, the holiest of months?

Well, Ramadan may be dedicated to spiritual practice, but Muslims are raised to celebrate it, and to bring a joyous spirit to the entire month, enjoying its blessings and benefits. Yes, we’re encouraged to spend our money on feeding the poor, on donating to charities, and to concentrate on God, rather than our wardrobes. But in Muslim countries, many people buy the entire years’ clothes for themselves and for their loved ones; even this act can accrue blessings because it occurs in such a holy month.

In fact, come to the end of Ramadan, as Eid approaches, and one of the greatest pleasures to help pass the difficult hours of the last few fasts is to go out at night, after the fast is broken, and buy new clothes for Eid. And on Eid Day, it’s a custom to wear those new clothes as we celebrate the end of Ramadan.

For Muslims who worry about this aspect, it’s important to remember that Islam urges balance in all things: as long as one is fulfilling one’s religious obligations in Ramadan, there is no harm in buying a beautiful outfit in celebration of the month.

But isn’t it a cynical marketing gesture on the part of DKNY to use Ramadan as a way of selling clothes?  If you think that, you’ve clearly never been to Pakistan, where I live. Entire clothing lines, such as the wildly popular Junaid Jamshed men’s stores, are based on meeting Islamic guidelines and use Muslim terminology and phrases to motivate people to buy the clothes.  And it isn’t just restricted to clothes: everything is sold using religion as a motivator. There is Al-Falah (Good Works) Industries, which takes its name from the line in the Muslim call to prayer urging people to “come to good works.” There’s even a brand of household soaps and cooking oils called Sufi – after the mystical branch of Islam.

The only thing DKNY did wrong was to include a well-known Hadith (saying of the Prophet Mohammed, peace be upon him) on the Web site: “Ramadan is the month whose beginning is mercy, whose middle is forgiveness and whose end is freedom from fire.” They edited the saying to remove the words “from fire” – which refer to hell – and did not attribute it to the Prophet. This can be corrected immediately, either by removing the quote completely or using the quote in totality and telling us who said it. If you’re going to appeal to Muslims, half-measures like these won’t work; authenticity is the key element in making concepts like these a success.

But what I like best about the DKNY Ramadan Web site is the Q&A with the two stylists that appears next to their looks. The women are asked what they like best about Ramadan (“Volunteering to aid the needy,” says Al Gabbani), what their favorite place is to eat the pre-dawn meal or break the fast in the evening (“The Majlis at Mina Salam”), and what their favorite Ramadan experience is (“Being around my family at Futoor time,” says Golsharifi). What a lovely way to bring Muslim customs to mainstream attention, and to show that Muslim women can be actively involved with both career and family, blending both together in a style that belongs uniquely and distinctively to the modern Muslim woman. Now that’s a look that everyone should aspire to.