Islam, The West And Nigeria: Whose Faith, Whose Girls?

ALMOST any dramatic development in the Muslim world can reignite arguments within the West about the "real" nature of Islam and Islamic culture. And the kidnapping of more than 200 girls in Nigeria by an ultra-Islamist militia has been no exception.

The whole story amounts to a terrible warning to Westerners and others who ignore the darker features of many Muslim societies, says Ayaan Hirsi Ali, who was born into a devout Somali Muslim family but has become a famous critic of the faith of her fathers. The emergence of Nigeria's Boko Haram (an armed group whose name literally means "Western education is forbidden") reflects "dynamics" which are common to Muslim communities all over the world, writes Ms Hirsi Ali, now a fellow of the Belfer Center at Harvard's Kennedy School of Government, in the Wall Street Journal. 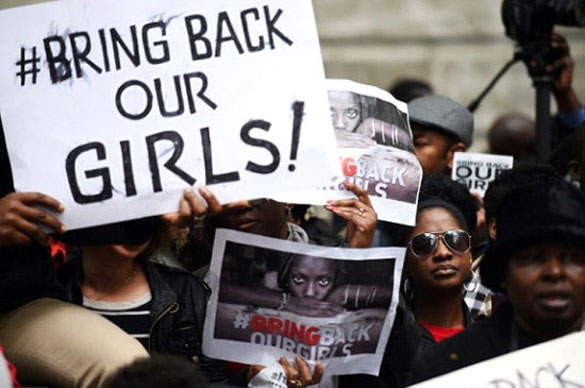 In any of these communities, whether in the Muslim heartland or the diaspora, angry young men can easily convince themselves, and quite a few others, that they are securing their own path to heaven if they try to re-impose repressive social mores, such as keeping girls and women indoors and covering them up from head to toe. Western liberals must be clearer-sighted about this, Ms Hirsi Ali argues, and "peace-loving Muslims should do more, much more, to resist those in their midst who engage in this type of proselytising before they proceed to the phase of holy war."

Arsalan Iftikhar, a human-rights lawyer and adjunct professor in Chicago's DePaul University, is one of the Western Muslims who has been speaking out against Boko Haram. But he also makes clear his strong disagreement with Ms Hirsi Ali's implied blame of an entire religious culture, or even an entire religion. "It is obscene and utterly un-Islamic for these lunatic human traffickers to invoke the name of God while kidnapping young girls and threatening to sell them into sexual slavery." In his view, the kidnapping was a violation not only of the Quran's general injunctions against oppression, but also of a specific warning against casting female servants into prostitution.

He insists that Boko Haram is no more representative of Islam than the Westboro Baptist Church, which stages nasty demonstrations at the funerals of dead soldiers or disaster victims, is of Christianity.

Meanwhile a prominent religious-freedom advocate has denounced the State Department for being slow to designate Boko Haram as a "foreign terrorist organisation" (it did so last November) and reluctant to accept that the group's motivation was religious. As late as 2012, the Obama administration's diplomats had insisted that Boko Haram's real driving force was not religious fanaticism but poverty and "poor government service delivery". According to Nina Shea of the Hudson Institute, such obfuscation "didn't help Nigeria, whose girls and boys, men and women, Christians and Muslims are now paying with their lives."

Religion obviously does have an effect, for better or worse, on people's behaviour, and it was silly of the State Department to half-deny that. But how exactly religion affects people depends on a lot of other external factors, mostly non-religious. One of Ms Hirsi Ali's better points is that "where governments are weak, corrupt or non-existent, the message of Boko Haram and its counterparts is especially compelling. Not implausibly, they can blame poverty on official corruption and offer as an antidote the pure principles of the Prophet." So perhaps the State Department's windy language about "poor service delivery" has a grain of truth in it somewhere.

As I wrote in another posting recently, religion explains some human pathologies (and virtues) but it doesn't explain everything. That might sound like plain common sense but in the heat of an ideologically-inflamed argument over the roots of terrorism, common sense can easily evaporate.