‘I Speak For Myself’: American Women on Being Muslim 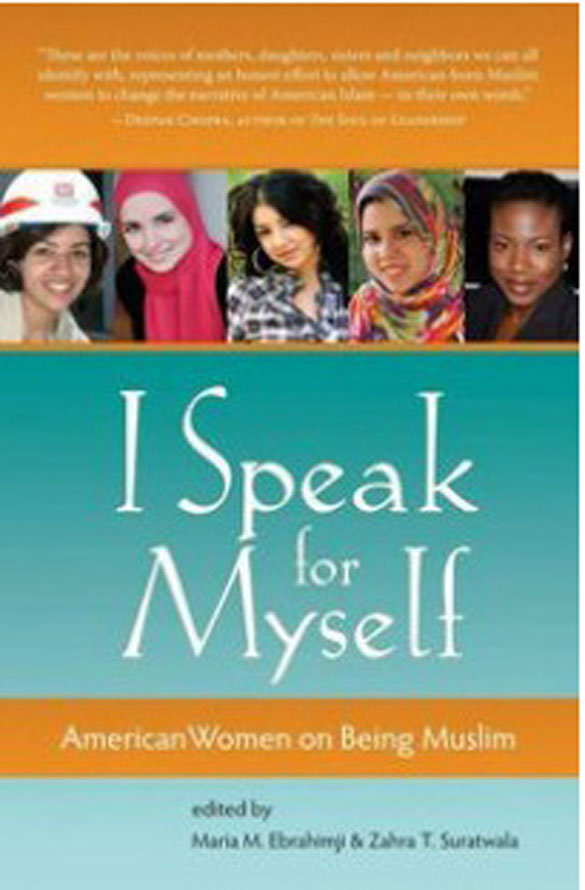 We need to say more than Islam is a religion of peace. We need to say, as Muslims, that we disassociate ourselves from violence.”

This is an example of the attitudes reflected in the book, “I Speak for Myself,” recently published in the US. It tells the short stories of 40 American Muslim women, all under the age of 40, who were born and raised in the US.

Their stories examine their faith, families, values, traditions and relationships with both non-Muslims and fellow Muslims, while they examine their searches for their own identities, as Muslim women in America.

Compiled and co-edited by Maria Ebrahimji and Zahra Suratwala, the book contains first-person narratives of women that, as the editors’ point out, have been “negotiating a dichotomy of Islamic and Western values since birth.”

Four of these women gathered last week at Georgetown University to speak about their experiences. Organized by the Alwaleed bin-Talal Center for Muslim-Christian Understanding at Georgetown University, Yusra Tekbali, Saliqa Khan, Asma Uddim and Hadia Mubarak all come from different backgrounds but agreed the US offers the comfort of a culture that is the hybrid of many cultures.

They agreed that their definition of being a Muslim had changed since the Arab Spring, as the worldview of Arab youth has changed after the Arab Spring revolutions. “It easier to be an American Muslim,” said Tekbali.

“The way we are described by the media has had a direct effect on our lives, which fortunately, is beginning to change,” said Tekbali.

Need for Muslim women to ‘find their voices’

She said the Arab Spring has allowed Arab women to “break so many stereotypes.” Yet, she stressed the importance of Muslim women to “find their voices. The more we, as Muslim women, speak out, the easier it will become for all of us.”

The women agreed it was essential to know their religion and to understand the difference between culture and religion.

“When I was growing up, I always asked my parents: ‘Is this because of culture or because of Islam?’” said Hadia Mubarak.

Tekbali agreed: “My religion was always polluted with politics, and by this I mean radical Islam. It’s up for Muslims to find a solution for this. They need to speak out against it. I understand that it is a byproduct of unfair politics and other things, but they still need to speak out.”

Tekbali said that tolerance is key: “The best way is through dialogue and by not being afraid to say I’m a Muslim to those who say they are more pious. I think in 10 years time, we will see a growing and developing Islam.”

‘We need to disassociate ourselves from violence’

Tekbali said it was important that Muslims learn to speak out on the tenants of Islam: “We need to say more than Islam is a religion of peace. We need to say that we’re Muslim and we disassociate ourselves from violence.”

Confusion between culture and religion has maligned Islam, they agreed. “There is a distortion between religion and culture. A lot of misogyny and maltreatment of women has no religious basis whatsoever,” said Mubarak who is finishing her doctorate in Islamic studies at Georgetown University.

To fight this ignorance, they said women have to be educated about the true sources of Islam. “They must know what the Qur’an and Hadith say,” said Mubarak.

“What I found in the Muslim community is that there are people who are religious in their practice, but their understanding of Islam is based more on culture than on the Qur’an. There are often several different interpretations of an issue, and we have to accept that,” said Mubarak.

Such an education also extends beyond their religion. “We’re educating ourselves as Muslims, but let’s not forget to also teach those around us who are not Muslim,” said Khan. “Many people here (the US) are beginning to understand that we are part of the Abrahamic faith, and that we have more things in common with Judaism and Christianity than not.”

Tekbali agreed, saying Muslims often put a lot of peer pressure upon each other. “The Muslim community expects so much from each other. We’re expected to do so much, to explain ourselves, our religion and ourselves to other Muslims, but I think we’ll eventually lighten up.”

The women agreed this is where the book has proved to be pivotal in their lives. Tekbali said she struggled with whether to accept to write because “they are personal commentaries.” However, after she did, she felt good about it.

Her chapter deals with her experiences working in Washington, entitled the “Capitol Hill Diaries.” She writes about the blowback of 9/11 she experienced. “It’s been really good to belong to this network of women in the book, especially when someone says we’re not Muslim enough. I have the support of these women who are like me.”

‘Muslim women need to empower themselves’

Asked if they had a message, Tekbali said women need to empower themselves. “Know your rights and keep fighting for them. Don’t get stuck in the superficial bubble of: ‘I’m a woman and I shouldn’t do this,’ or ‘I should spend my time shopping rather than fighting for my rights.’

“What I mean is that you can be a feminist and a good mother, daughter and sister and be sexy and feminine. At the same time, however, demand your rights.”

Tekbali who has been in Qatar working as a journalist since August, while also advising human rights groups on Libya, said the book offered her a way to speak out. “Even though I was born in the US, I belong to this very conservative culture of Libya.”

Tekbali said it was difficult to put herself “out there” because of Libya’s conservative culture. “Once, I did and saw other women doing the same. I saw women struggling silently because they were afraid of a community backlash.”

“So, that’s the message of this book: Embrace yourself and empower yourself through your cultural identity and religion.”