It Is Not Always The Mullah!

This was how a dear friend teased me when I decided to use the Islamic veil for my outings. Of course, she was speaking only the half truth. It was a decision I made for myself as I felt happy about it. Contrary to the alleged reports of the Mullah Mafia forcing women to don a Burqa, my decision to wrap the black garb around myself was a voluntary one. Sorry to disappoint my liberal and moderate friends.

I arrived on the Burqa scene after due deliberation and because I simply loved it. It was irresistible, this long and flying robe gives me a certain confidence to move around, perfect in satisfaction that, no one would dare throw a nasty look or a remark at me, or act smart. 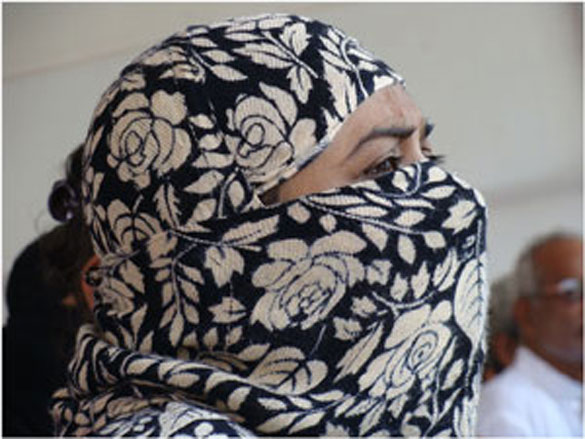 Can a Muslim woman not make her own choice in deciding to put on a Hijab?

I felt confident and free in my garb. Earlier when I didn't wear one, ( I never thought I would!) I was perennially concerned about my appearance and the way I would like to present myself before others. A Make up kit is something which I have always stayed away from. But there were other crucial questions. Are my sapphire ear studs analogous with my light azure Sharara? Is my Dupatta going well with my ensemble or is it a bit muted? And most importantly my crowning glory, Tangled I was! Have always had a hard time, keeping this tangled glory in place!

But with the donning of the black Abaya, all these questions were put to rest and I felt a rare calm in my being. The natural desire of a woman to look /appear beautiful/presentable for her immediate outside world, gave way to focusing on my inner virtues. The outward gave way to the inward progress and I felt a mysterious ecstasy, the moment the soft flowing robe engulfed my little being. It became my universe. [Not forgetting to add, I still worry about azure ear studs, but not so much!]

Hailing from a middle class Muslim family consisting mostly of academicians, my choice didn't go down well with my immediate audience. No one, absolutely no one, in my family, paternal, maternal or the in- laws, used an Abaya or Burqa. I became the trend-setter. Feedback ranged from absolute shock, discomforting looks, weird commentary or a shrug of shoulders, from friends, relations and well wishers. You will die of heat, was the common rejoinder I got tired of hearing. My swift move to cotton cools instead of the nylon ones was wiser and a dampener on their free flowing and easily available teasing spirit. Even dear hubby, initially, didn't take to it very kindly, refusing to accompany me for outings....with a snobbish remark..."I don't have the courage to be seen with a Burqa clad woman. My friends would think, I forced it on you".

He feared. He was right.

She must have been forced to wear this Burqa!

Why do people have to jump to this one and only conclusion ,the moment they see a woman clad in the black, that she must have been FORCED to wear it?

Yeah, there may be instances where women might have undergone this ordeal but not always. We must try to be valiant enough to look at the other side of the story as well. The arguments can be done on both the sides, but as I am not a lawyer, I can only present my side of the story, as it exists.

Public in general gives mixed reactions to Burqa wearing women. But mostly I find them treating us with respect and I often get the first preferential spot in the queue, if the room is overcrowded with men and of course with great respect and sounds of “Sister, you go first,” kind of kind things, said to me.

But the so called liberal fraternity doesn't take kindly to the veil. They are generally hostile and the common perception, even among them, is that a Burqa wearing woman must be a backward illiterate female with little common sense. I face it almost on a regular basis. The judge on an influential renowned university panel 's remark after my winning all the three academic competitions , hands down, was telling enough.

“I can’t believe you have done it!” She declared.

The reference was to my being behind a black veil, all the while.

I think it’s high time for those among us with the sobriquets of moderates and liberals, that it’s not always the Mullah! By saying so, you are insulting my intelligence and doubt my capability of comprehending things for myself and entirely on my own. There may be and there are increasing instances of women opting for Islamic veil, of their own free will, of their own accord. It’s their choice, made without any sort of compulsion. The Mullahs won't be able to make any moolah here, with us the educated Muslim women of today.

By saying that the Mullahs force us to do so, you are also questioning my right to use an ensemble which fits as per my religious and ethical norms. It’s against their own liberal spirit.

And as I cherish the concern of my well wishers for the deficiency of Vitamin D, due to the black robes drowning me into their yielding folds ,and disallowing any sun rays, let me tell them, I also have vitamin I.

Hence in my place of dwelling I emerge out of my Abaya and soak in the soft sunlight, to my heart's content. And if some liberal insists even now on my allegedly being forced to do it, I'd rather say, leave me alone.

The supple touch of my soft Abaya soothes my soul too. My veil gives me a delight indescribable in words, it gives me a confidence, I didn’t find earlier in my being , and most important of all, it defines me , it gives me my sense of a dignified identity and tells me who I am.

A woman in black.

Yes, it’s not always the Mullah!

P.S.: I respect all the scholars whether they are called Mullah, Maulana, Sant, Sadhu or Father or Priest. I have used the term Mullah here as it is this term our liberal friends use liberally to ridicule us and our practices.

Asma Anjum Khan is Assistant Professor of English in Maharashtra.