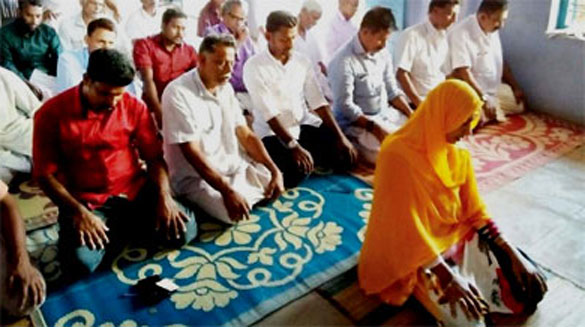 "The Quran is clear - there is no discrimination between man and woman," Imam Jamitha Teacher told NDTV

That Muslim women have been leading prayers is no secret. There are records which attest that. But these records tell us that they were leading all women congregation. There was perhaps no precedence of a women leading a mixed congregation of men and women. One of the earliest examples of women praying inside mosques are at Ahmedabad where it can be clearly seen that women devotes had earmarked spaces for them: generally above the basement in an enclosure meant for them. The entrances and exits of these enclosures were separate and idea was that they should be out of sight of the praying Muslim men.

There is nothing in the Quran which prohibits women either going into a mosque or leading a mix congregation. In fact, there are many parts of the Muslim world where Muslim women are allowed access to mosques and they can pray there too. However, these are still segregated spaces and mixed prayer is something which is still unthinkable. The problem seems to be typical of South Asia, where women are not allowed to pray inside the mosque. Forget about mosques, they are not even allowed in various Dargahs. Consider the irony: Bulle Shah learnt most of his Islam in the company of women and yet women are not allowed in his mausoleum. Consider also the Shrine of Peer Abbas in Pakistan where dogs are not allowed in his shrine anymore although while alive the Peer himself was surrounded by strays all the time. The puritanism that applies to women and dogs are the same: they are both considered polluted and hence to be kept outside the sacred space.

Since the Quran is silent about it and it is only the Hadith which speaks about restricting women’s spaces to mosques and shrines, throughout history, such patriarchal reading of the text has been questioned from time to time. One of the first to raise the banner of revolt was the great grand-daughter of the Prophet himself. Sukayna exercised her Nikahnama so that her husband will never take another wife, something which we could have learnt during our debate on a model Nikahnama. Taking a cue from the courage displayed centuries ago by Sukayna, one Muslim woman has sought to challenge the entrenched male dominance within the Muslim society. K Jamittha led a mixed gathering Namaz at Mallapuram. Of course she must have been supported by the many progressive minded Muslims like her, both men and women. But to take that first step is always audacious and for that reason alone she must be saluted. In her brave act, she has followed the footstep of Amina Wadud and Asra Nomani who have led similar acts of worship in the western world. These simple acts of worship are actually political protests as women have been denied the fundamental right to prayer in a congregation and even if she is the most knowledge in the group, she has been denied to lead the prayer just because of her gender. Citing that nowhere in the Quran, there is such provision, these women have marched ahead and reclaimed a space which they hold dear and think that it is important part of their identity.

Before we come to any conclusion that these are western inspired women who are out to imitate the west, without any real knowledge of the scripture, please think again. K Jamitha is very much Indian and her conviction to challenge a male fortress has come after a long struggle within her own community. Also there is an ideological movement behind her which made this happen. K Jamitha belongs to the Quran Sunnath Society, which follows the ideology of Chekanoor Maulvi who was killed under mysterious circumstance in 1993. Chekanoor Maulvi was perhaps the first Alim who supported the Supreme Court Judgement on Shah Bano and said that she should be given alimony. He rejected all the classical texts barring the Quran and in fact said that some of the Hadith were written to give a bad name to Muhammad. His was therefore an approach which completely discarded adherence on the traditional narrators like Abu Huraira who he thought was responsible for much which is wrong in the Quran. He questioned the established interpretation of Quran and therefore questioned many of the existing power relations in society. It is not surprising therefore that one day he just ‘disappeared’, never to be come back. It will be a great tribute to the scholar if his works are translated far and wide so that others can learn from him.

After his death, his followers established the Quran Sunnath Society of which K Jamitha is a member. Thus she is not without an ideological pedigree. She belongs to a thought which made the orthodox call Chekanoor Maulvi by various names when he was alive. Today when she has done such a revolutionary thing by leading mixed prayers, the orthodox are in union saying that this is a small incident and does not affect the Kerala society. Thus they have conveniently made the Quran Sunnath Society into a sect: s sect which lies in some remote corner and whose members are limited and therefore not a threat to the larger social religious structure. They must remember that all prophets and all truths have a certain remoteness about them but they all eventually triumph.

May Jamitha and her tribe increase!