The Many Meanings of Hijab

A Singular Understanding of the Veil Is Best Avoided

1.    The history of hijab as a symbol of Muslim identity is extremely complex and varied

2.    The Quran does not talk of the hijab in the sense of clothing; rather it uses the word Khimar for that purpose.

3.    Khimar is not a dress code, rather an inculcation of modesty whose standards are different for men and women in the Quran.

4.    The Khimar or the veil (as it is now known), is not just a religious obligation but also performs important sociological functions. 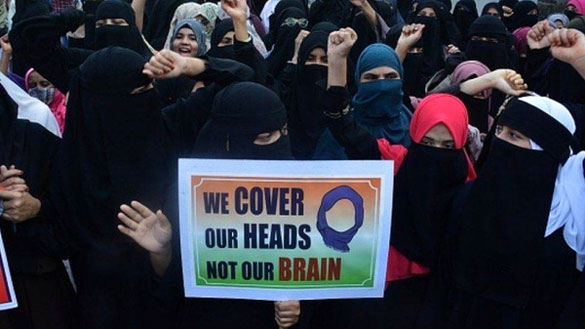 The row over headscarves has sparked countrywide protests

One of the most disturbing images in the wake of the Karnataka hijab imbroglio was the forcible removal of headscarves and Jilbab (outer covering/gown) of Muslim students and teachers. Like the demolition of the Babri mosque, those images will become the defining moment in the history of communal relations in India. Some have compared the episode to the unveiling of Algerian women during the French occupation. But the comparison misses the point that the French military had staged the unveiling, under the misguided notion of liberating Muslim women. Karnataka was neither staged nor is the ‘liberation’ of Muslim women a stated position. It was the naked display of majoritarian might with the express intention of ‘showing Muslims their place’. In a country where every other government school organizes Saraswati Puja, it is rather rich to argue that the college in question was trying to enforce some sort of secular uniformity. In a country where most public spaces are saturated with Hindu religious symbols, it is dishonest to expect Muslims to give up their religious markers.

The history of hijab as a symbol of Muslim identity is extremely complex and varied as it is linked both with religious obligation and political expression. Although today the hijab is understood as headscarf, the Quran does not use the term in the sense of a cloth which is used to cover the head. In the seven different places in the Quran where the word hijab occurs, it specifically refers to a separation, visible or invisible. Amongst these it is only one verse that gets highlighted: “O you who have believed, do not enter the houses of the Prophet except when you are permitted for a meal… And when you ask [his wives] for something, ask them from behind a separation (Hijab)" [Q 33: 53]. And this verse gets highlighted because it appears as an obligation for Muslim women to observe seclusion. However, the verse clearly is related to the wives of the Prophet and speaks of a contextual requirement, that of respecting the privacy of the Prophet and his household. It certainly does not speak of any dress code, rather the intention is to teach good manners to Arabs. Secondly, it exalts the wives of the Prophet, transforming them into mothers of believers who should be approached with profound respect and from a distance.

The current meaning imputed to hijab as a headscarf therefore is non-Quranic in its essence. But does it mean that the Quran has no position on head covering? It is wrong to believe that it does not. In fact, the Quran mandates head covering for women but the term it uses for it is not hijab but Khimar. The relevant verse says: “... And tell the believing women to reduce [some] of their vision and guard their private parts and not to expose their adornment (Zinatahuna) except that which [necessarily] appears thereof and to wrap [a portion of] their headcovers (Khumurihina) over their chests (Juyubihina) and not to expose their adornment except to their husbands, their fathers, their husbands' fathers, their sons, their husbands' sons, their brothers, their brothers' sons” [Q 24:31]. The term Khumurihina is the plural of Khimar, and refers to the headscarf that women used to wear those days and not just in Arabia. What the Quran is telling Muslim women in this verse is to draw/fold the Khimar/scarf over their chests to cover the upper part of their bodies when they are in public. Classical commentators have suggested that pre-Islamic women used to keep their neck and upper chest uncovered and it is in this context that the verse commands Muslim women to cover upper part of their chest in order and embrace ‘modesty’.

Muslim feminists like Asma Barlas and others have argued that the Quran does not mandate the covering of the head but they clearly misread the function and etymology of Khimar. Most Arabic dictionaries understand the Khimar as a headscarf. It appears that the Khimar was a traditional attire of the region which got carried over into Islam. There is near universal consensus amongst the exegetes that hair should be covered but not the face. Those who argue for the full-face Niqab or the Burqa are certainly arguing against the Quran and the Sunna.

This is not to suggest that headcover is exclusive to the Islamic faith. All Semitic traditions mandate it and within Hinduism, the traditional expression of modesty has been the Ghoonghat which can still be seen in many regions. However, modesty in Islam is not just linked exclusively with the women’s body because the Quran clearly states that even men should actively cultivate it as part of their religious calling. Of course, there are different standards for the expression of this modesty between men and women and one should not expect the Quran to be apologetic about this difference. Some might argue that behind the veneer of modesty is exploitation or oppression of women. And that might be true in certain lived experiences of Muslim women. But the Quran talks about modesty in terms of an ethico-religious value and definitely not in the sense of subjugating women.

It is also important to understand the verse of the Khimar contextualises the garment as necessary when Muslim women interact with unrelated males, in other words when they are in the public domain. Thus, rather than reading it as invisibilising women, Khimar can and should be read as an enabling medium through which Muslim women can participate in the public sphere.

There can be a number of reasons why Muslim women take the Khimar or the veil (in its modern usage). They can do so for religious reasons, internalizing the veil as an expression of Muslim piety. If such a believing women argues that by draping the veil, she feels nearness to God, then it should not be our place to judge whether she is right or wrong. There can be multiple ways of expressing the self and doing so in terms of religious aesthetics is also legitimate. Many a times, the secular worldview privileges absolute individualism as the only viable experience for humans, men or women. But we know that individualism is one the many possible experiences; for many relationism and surrender can equally be meaningful and rewarding experiences. The secular unease with the veil therefore needs to be revisited as perhaps too Eurocentric in its orientation. The Indian version of secularism offers us a window to engage with all religious worldviews rather than excluding them simply because it does not conform to our notion of freedom and individualism. 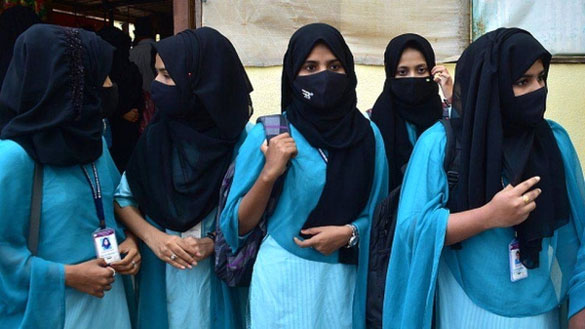 But being observant is not the only reason why Muslim women take the veil. She can be non-observant and still take to the veil. Often times, for such women, the veil is an article of negotiation with familial and societal contexts. The conservatism within Muslim society has meant that for many women, it is only the veil which enables her to access higher education. Also, there are other Muslim women who might be even non-religious but sport the hijab as a mark of cultural and political identity. For them, the veil is a symbol of choice as the practice is not coming from any religious understanding.

It is interesting to note that the traditionalist within Muslim society is quite at unease with the veil. Since the veil enables Muslim women’s access to the public square, the conservatives think of it in terms of spreading Fitna (unrest/instability which disturbs the existing social order). It is not surprising therefore that most of our traditional commentators, like those of Ashraf Ali Thanvi for example, treat women as demure and as an ornament, not giving them a place under the sun. But as we saw earlier in the CAA/NRC protests and now again in Karnataka, veiled women are anything but domesticated; rather they are vocal, smart and extremely articulate. It is not surprising that the traditionalist Ulema from Deoband and Bareilly have largely been silent on the issue as in their view, rather than going to schools and colleges, these Muslims girls should have been ideally sitting at homes, learning household work and reading a bit of religious literature. The veil then, rather than inhibiting women, signifies a breakdown of the traditional religious authority within Muslim societies. A singular reading of the veil is therefore deeply problematic. It is perfectly understood that in large measure, the veil/Khimar is a religious obligation but we should definitely not ignore the sociological functions it performs in contemporary contexts.

This sensitivity, however, should not blind us to the fact that there is considerable pressure on Muslim women, married and unmarried to take to the veil. Over the years, the increasing Islamisation of society has moved it towards overt and literal scripturalism, wherein Muslim women’s bodies has emerged as the master signifier of Muslim religiosity. Girls, as young as six and seven are encouraged or forced to cover their heads and this social conditioning goes a long way to make the veil a part of her bodily habitus. Often in such societies, those that go without the veil are branded as immoral and immodest. Such socio-religious conventions exert informal and at times even formal pressure on such families to ‘fall in line’. Social pressure forces many Muslim girls to adapt to the veil simply because she does not want any unwanted attention. Anyone who argues that there is no social pressure to do so is simply being dishonest or doesn’t know the Muslim society from close quarters.

Simply put, if one argues for freedom to choose the veil, then one should also extend the same courtesy to those who do not want to make that choice. After all, aren’t we Muslims fond of the Quranic saying that there is no compulsion in religion?