Widow Marriage - Rewards by Allah, Fulfillment of a Sunnah and A Social Obligation

2.    A widow’s right to remarry and a women’s right to live a happy life.

3.    When a person dies, especially at a young age, he leaves behind many of his unfinished works and unfulfilled promises.

4.    In a compassionate society, there can not be any place for someone (a widow) to be left to cater for her needs living a lonely life as a punishment.

The time of death of every living being is fixed. It is death that is confirmed. One, therefore, can not blame anyone for his death. When a person dies, especially at a young age, he leaves behind many of his unfinished works and unfulfilled promises.

Had there been an option of having a probable time of death, every one of humankind would have completed his/ her work and responsibilities at hand. And, thus, many religious obligations that come on the kin of the deceased and are a cause of conflict between the people of the same religion and reason of derogatory comments by the followers of other religions. But it was not to be. It is a belief of the believers of Islam and other Abrahamic religions that all that Allah, the Almighty Creator does is in the interest of His creation. One of the various reasons is, as Allah, the Most Gracious says in the Holy Quran:  To test the believers

Islam is a religion of love, compassion, pluralistic ethos with the essence of harmonious society building. In a compassionate society, there can not be any place for someone (a widow) to be left to cater for her needs living a lonely life as a punishment for the crime she has not committed. Therefore, Islam has granted a high place to the 'marriage with a widow'.

A widow in our society is taken as a sign of a bad omen. She is neither consulted nor consented in any of the social ‘Shubh’ gatherings. A widow is considered an inauspicious being for every kind of social celebration. She is considered a person who can not participate in marriage ceremonies, birth ceremonies and all other auspicious social and religious celebrations.

Islam has granted the woman a respected and appreciated place in society. It has guaranteed women a place equal to that of men. Women as a mother, a wife and a daughter, in every role, are a gift of Allah to mankind. Allah the Most Gracious has guided human beings to provide them with a respectable life.  Keeping this in view, Allah has blessed them with a right to remarry as per their own will. 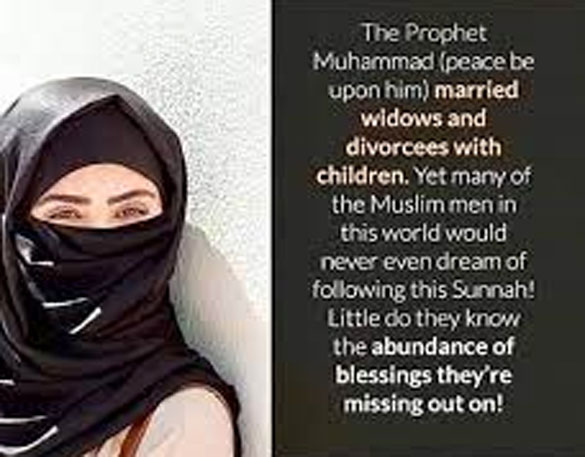 In a widowed marriage, Allah has commanded not to indulge in any way of compulsion with them. They should be remarried if they so wish. They should not be compelled to either marry or not marry. Allah, the Most Gracious says in the Holy Quran:

“O you who have believed, it is not lawful for you to inherit women by compulsion.” Quran 4:19

The Abrahamic religions agree with far as the marriage of the widows are concerned. These religions consider marriage with a widow to be of the highest degree of works that pleases Allah.

The following verses from the Holy Quran, the Holy Bible and the Prophetic traditions place ‘widow marriage' as one of the most likeable deeds a human being can perform:

O you who have believed, it is not lawful for you to inherit women by compulsion. (Surat An-Nisā': 19) - Sahih International

“And when a widow completes her term (Iddat) then she should decide about herself whatever she wants according to the customs. You have no burden of it.” (Quran)

“And for divorced women is a provision according to what is acceptable – a duty upon the righteous. Thus does Allah make clear to you His Ayaat that you might use reason.” (Al-Baqarah: 241-242)

1 Corinthians 7:39 - The wife is bound by the law as long as her husband liveth; but if her husband is dead, she is at liberty to be married to whom she will; only in the Lord.

1 Timothy 5:14 - I will therefore that the younger women marry, bear children, guide the house, give none occasion to the adversary to speak reproachfully.

1 Timothy 5:9 - Let not a widow be taken into the number under threescore years old, having been the wife of one man,

I say therefore to the unmarried and widows, It is good for them if they abide even as I.  But if they cannot contain, let them marry: for it is better to marry than to burn. - 1 Corinthians 7:8 - 9

Prophetic Traditions on the Widow Marriage

Narrated Abu Huraira: Allah's Apostle said, "The one who looks after and works for a widow and a poor person is like a warrior fighting for Allah's Cause." (Sahih Bukhari Book 73, number 36)

Narrated By Jabir bin 'Abdullah: I was accompanying the Prophet on a journey and was riding a slow camel that was lagging behind the others.

The Prophet passed by me and asked, "Who is this?"

I replied, "I am riding a slow camel."

I replied in the affirmative.

When I gave it to him, he beat the camel and rebuked it. Then that camel surpassed the others thenceforth.

The Prophet said, "Sell it to me."

He said, "Sell it to me. I have bought it for four Dinars (gold pieces) and you can keep on riding it till Medina."

When we approached Medina, I started going (towards my house).

The Prophet said, "Where are you going?"

He said, "Why have you not married a virgin to fondle with each other?"

I said, "My father died and left daughters, so I decided to marry a widow (an experienced woman) (to look after them)."

When we reached Medina, Allah's Apostle said, "O Bilal, pay him (the price of the camel) and give him extra money."

Islam keeps human rights to live happily above all other rghts of human life. Widow marriage is one of those rights. If a woman becomes a widow she does not lose her right to lead a happy life after a remarriage. There are innumerable instances of girls becoming a widow at a very early age in such a case asking them to live a lonely life is inappropriate. That is why Islam has granted every widow a right to remarry.

Scholars also take the widow's marriage to be appropriate as the following quotes say:

The public is rather apt to be unreasonably discontented when a woman does marry again, than when she does not. - Jane Austen

Remarriage is or is not approved in Shastra; I have no authority to speak on this subject. But I surely cannot go on without saying this much, that remarriage has helped a great deal in stopping crime in Fiji. - Totaram Sanadhya