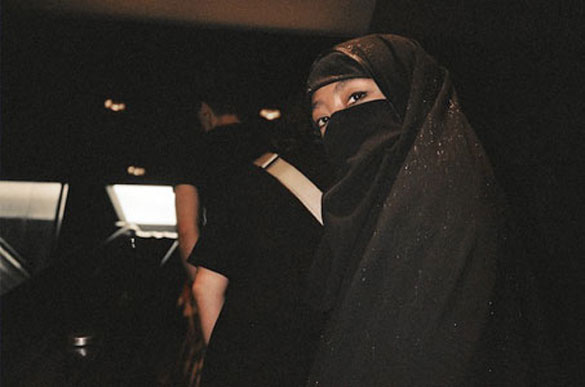 I was recently asked by our global editor to track down a burqa for a music video we were planning to shoot, I guess because I'm the fashion editor. I didn’t know a thing about Islamic clothing—or that you can’t just go to the burqa shop and get one. Turns out it's a giant pain in the ass. But I did find the one I wanted, eventually.

As I scrolled through countless websites looking for hijabs, niqabs, khimars, abayas, jilbabs, and other religious-tinged garments, I began to notice that no one has anything positive to say about any of them. Nearly every news story I’ve ever read with the word burqa in it labels the garments as oppressive to women, and the only articles I found by females who’d actually worn them had been written about their experiences walking the streets of Muslim countries.

After watching 74 YouTube videos and parsing 108 Google search pages, I couldn't find one article or video explaining if burqas were comfortable or how Americans reacted to seeing someone resembling the Grim Reaper float by them in line at Starbucks. I figured that the only way I’d really know what life was like for women who have been consigned to wear the least-revealing piece of clothing of all time was to dress up as one of them. 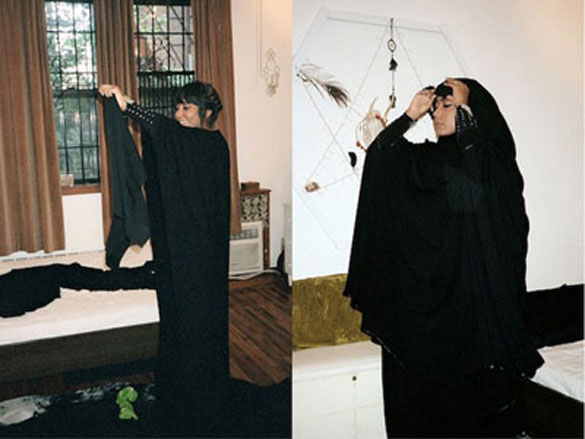 My little fashion-cum-social experiment started when Ben Ritter arrived to photograph me as I figured out how to assemble my burqa. There were a number of different types available online from various countries, and for whatever reason I decided to go with the Saudi Arabian variant. Saudi burqas consist of five pieces and seemed in much more in line with my idea of a “proper” burqa than the Afghan version with bedazzled “fashion sleeves.” 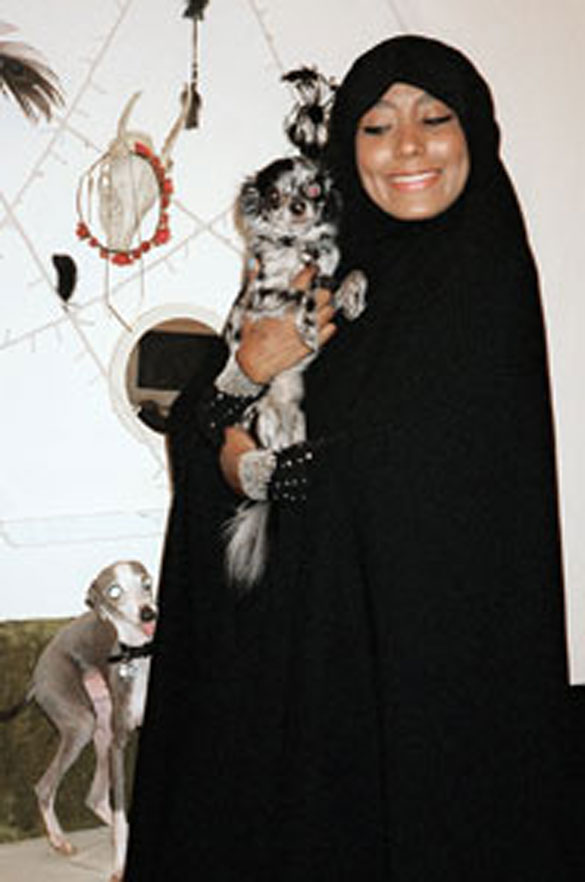 My dog Bowie was really confused by my outfit. The only other time I’d seen her this freaked out by me was when I dressed up as a pregnant nun on Halloween. 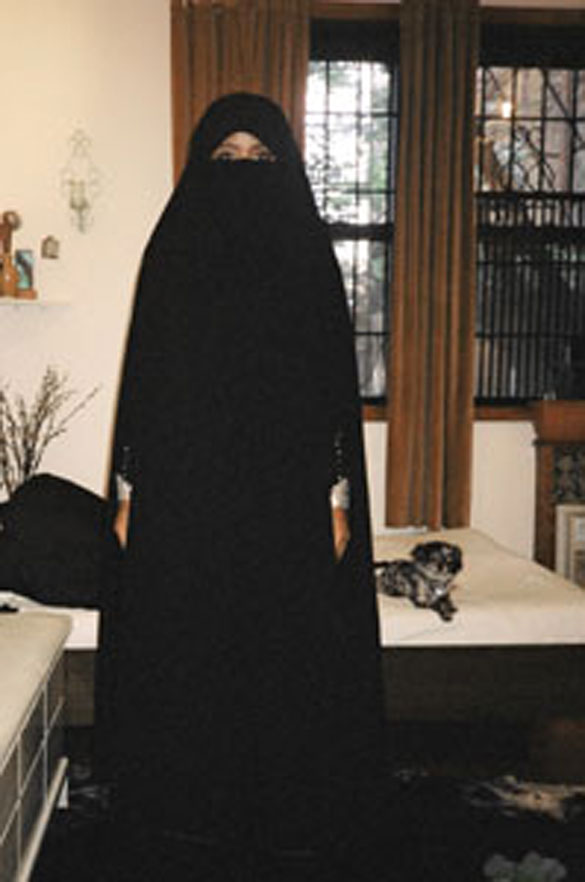 The final look. We hadn’t left my house but I was already bitching about how hot it was. I wanted to go naked under the abaya but since burqas are supposed to be outwear, I wore it over a crop top and the shortest shorts I could find in my closet. 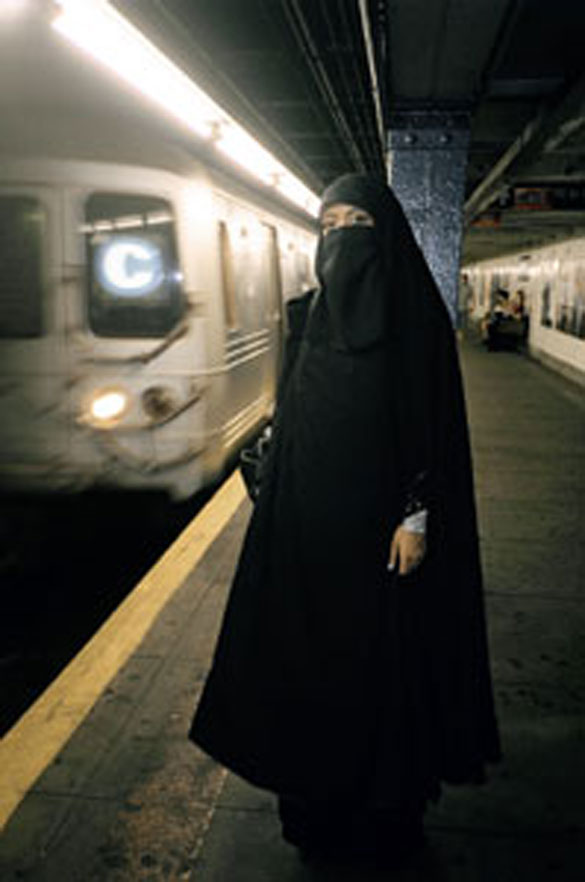 Walking around the East Village or Brooklyn surrounded by people we knew seemed like a waste of time, so we hopped on a train uptown to pretend we were tourists. No one really paid much attention to me except the woman on the bench behind me who was sitting with her children. She dragged them to the other end of the platform when she saw me step onto the train. What a bitch! 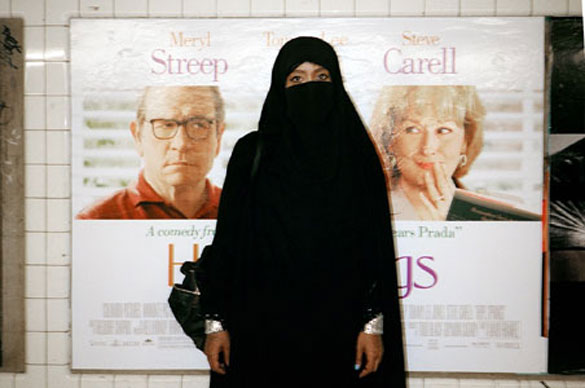 Oh you know, just hanging out with Meryl Streep and Tommy Lee Jones (and Allah) on the subway platform. 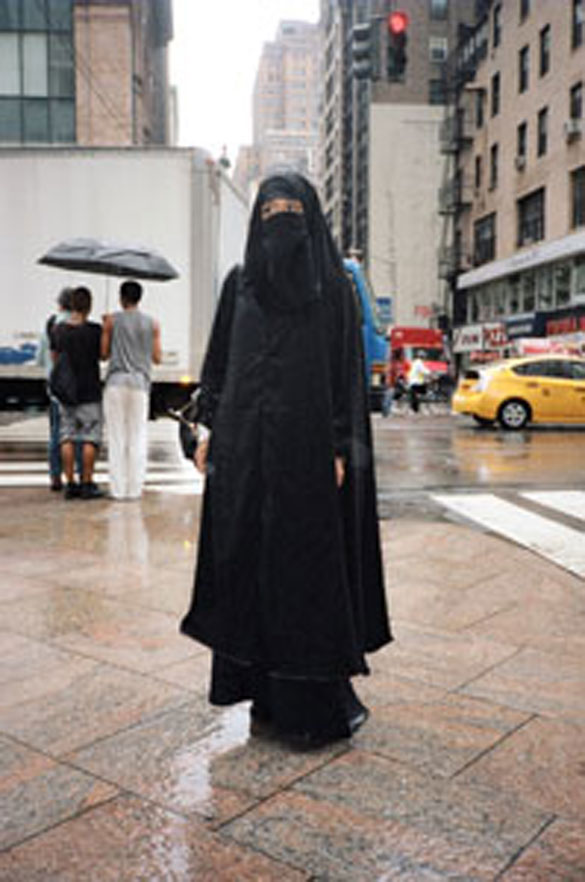 When we got out of the subway it started to rain really hard. Lucky for me, I didn’t need an umbrella—one of the few pluses of wearing a burqa. I’m a native New Yorker, which means I had never been to the Empire State Building. So we went there. I didn’t realize the significance of visiting one of the tallest buildings in New York dressed in Islamic garb until we reached the entrance. I felt like a jerk. 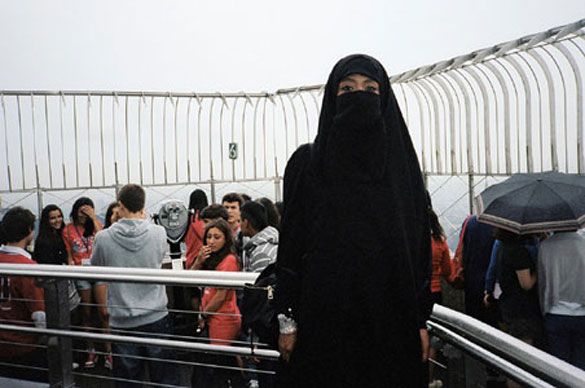 Once we reached the roof things got really uncomfortable. I could tell all the foreigners were talking shit about me in their native tongues. The group behind me also followed us around, presumably because we were taking so many photos. 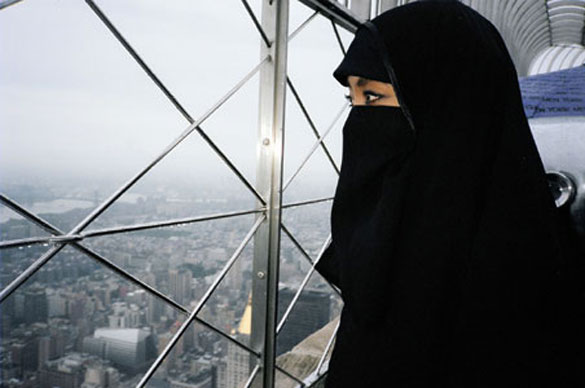 While I posed for pictures we noticed that one of the security guards was following us around. I guess he was trying to figure out if we were pulling some stupid stunt (we were) or casing the joint (we were not). 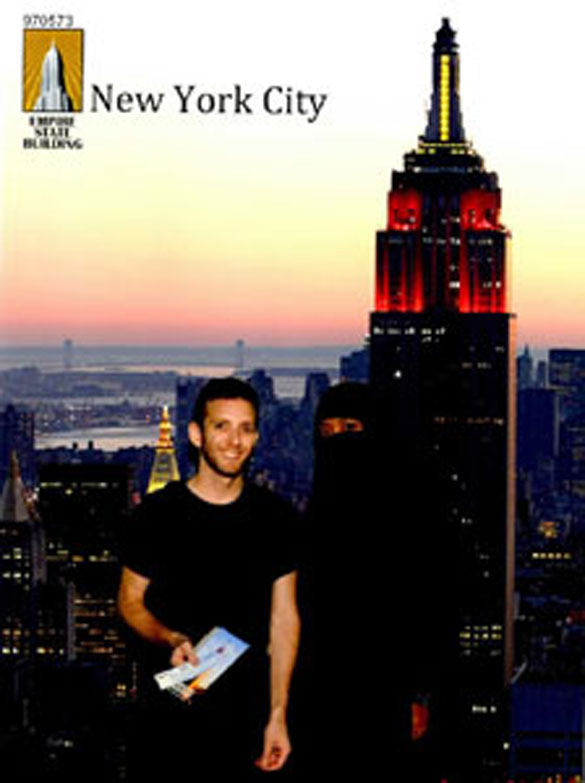 We ended up taking one of those cheesy green screen photos before we left. The girl in charge of the booth said we didn’t have to have our picture taken if we didn’t want to. This annoyed me, so we jumped right in and made her snap one. Doesn’t Ben look like he just married a virgin? 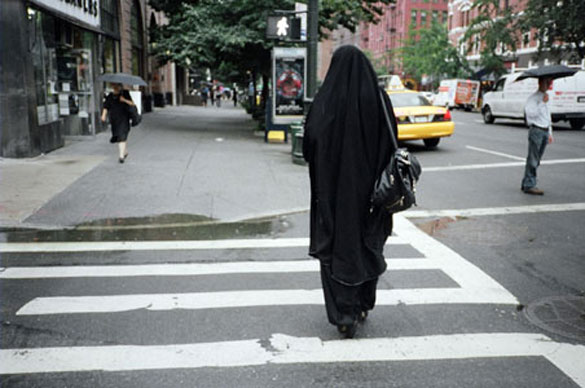 When scaring tourists got boring, we decided to walk further uptown to Central Park in an attempt to bother some locals. The burqa was dragging through puddles so I ended up having to hold the front with both hands. Although completely inconvenient, it wasn’t all that bad and I found myself pretending I was a dainty princess in an elegant gown. 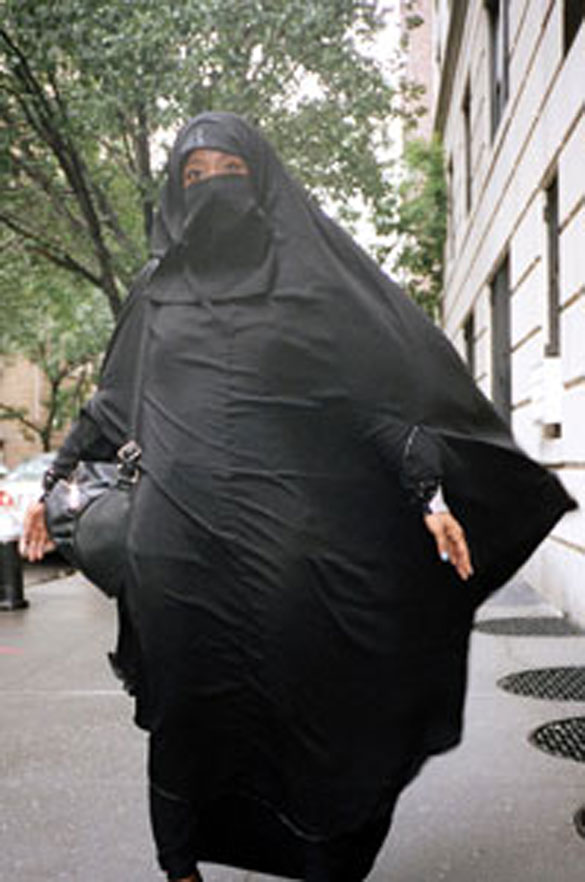 A big gust of wind nearly blew me down the block. I caught my reflection in a doorway and thought I looked like Batman, so I made Ben take a picture. All of the cold air blowing through the sleeves of the khimar felt really good. 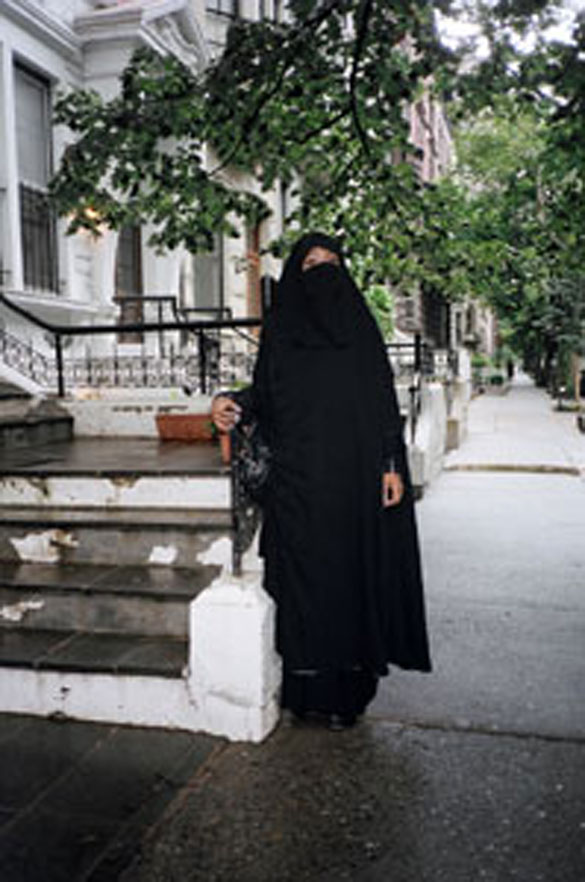 I had to keep taking breaks to rest. The rain had stopped and it was so humid I was starting to sweat in places I’d never sweat before. If I had to wear something like this in the desert I would most likely die… 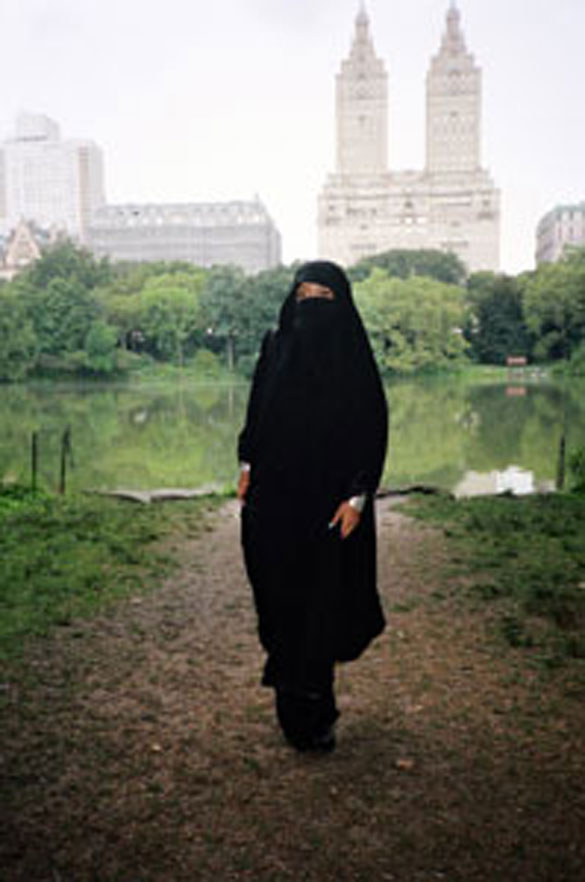 I wanted to fulfill a life-long fantasy of running through Sheep Meadow, but it was closed so we decided to shoot by the pond instead. It was such a pity because all of the layers I was wearing made me feel like Kate Bush; we could have gotten some amazing burqa-dance photos. 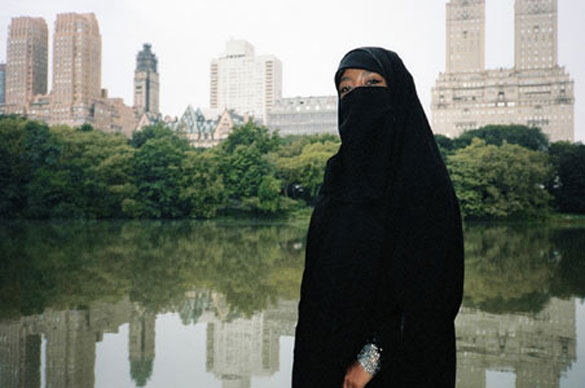 The most important thing I learned during the day was how to smile with my eyes. I hate smiling but assumed no one wanted to see an angry bitch in a burqa, so I put in the extra effort. Nice, huh? 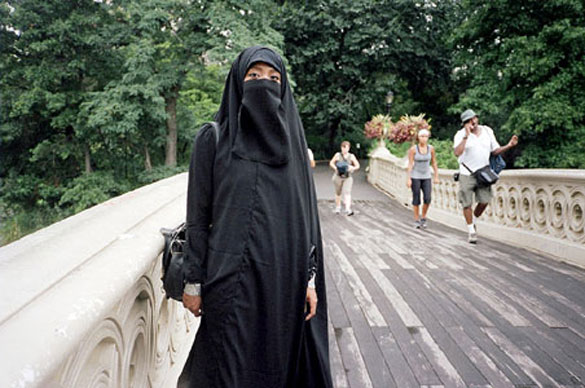 Eventually I had to give up on the smiling because I started breathing like Johnny Depp’s mom in What’s Eating Gilbert Grape. The fact that the park smelled like wet horseshit didn’t help. 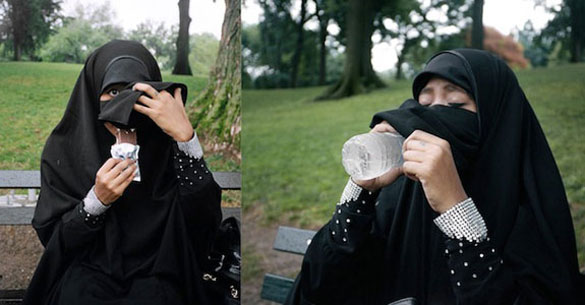 I was starving and couldn’t eat a hot dog, so I made the horrible choice of trying to eat an ice-cream bar. It was a stressful experience for me, but passing park-goers were happy to watch me struggle as I lifted the mouth flap ever so shyly to shove ice cream in my face. I didn’t want to give any of those creeps the satisfaction of snapping a photo so I ate it as fast as I could and got ice cream all over the inside of the niqab. It was disgusting. 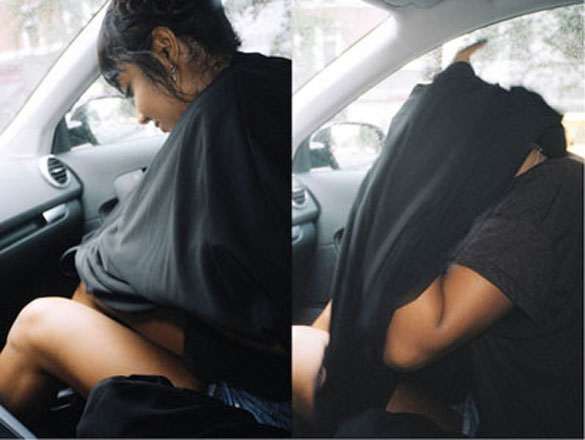 Six hours later, after a number of complications, I finally ripped the goddamn thing off. I’ve never been so happy to go home.

At the end of the day I was proud of what I’d accomplished. Not only did I face up to some of my own fears by putting myself on display, I’d also learned to be more conscious of the way I treat people on the street, no matter how they’re dressed or what they look like.

Eight out of ten people that I came in contact with while wearing a burqa acted as if I didn’t even exist, which actually made feel worse than the looks I received from busybodies who were offended by my presence. I have a newfound respect for the women who chose to wear these kinds of garments, but I will never do anything like this ever again because it suckkkkked.