The Truth Behind Indian Muslim Women On Sale! And The Salacious Sulli Deals

Sulli Deals: A Malicious App Abusing Indian Muslim Women and Putting them ‘up for sale’

1.  Sulli deals is not just a cyber crime against Muslim women but also a sustained attack on them because of their apparent muslimness

3.  Abusive app are manufactured to viciously sexualise Muslim women as objects of desire, to be ogled and worse, put on sale

4.  Cyber crimes and VAW needs to be dealt with iron clad laws and severe punitive actions 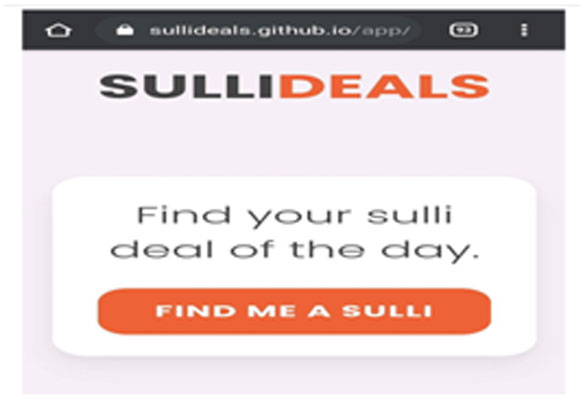 Abominable, derogatory and absolutely unacceptable systematic targeting of Muslim women in the recent cyber crime of ‘sulli deals’ reeks of mysogynistic islamophobic mindset that has been on ascendency for a while. If shameful and vile trolling wasn’t enough,  malicious apps are manufactured to viciously sexualise Muslim women as objects of desire, to be ogled and worse, put on sale. The anonymous group running ‘sulli deals’ especially hacked pictures and other personal details of Muslim women and declared them to be the available “deal of the day” much like flash sales attracting maximum customers. Irresponsibly  shared and widely circulated on the social media platforms, these blissfully ignorant Muslim women suddenly found themselves on sale as commodity with demeaning, and undersigned sexual innuendos. Most significantly, Muslim women auctioned on the predatory site are young and educated like journalists and working professionals who dared to  voice their criticism against the government and thus deserve to be punished.  Amnesty Troll Patrol project, 2017 revealed in its report that one abusive tweet was sent in every 30 seconds and  socially active women like politicians and journalist are more likely to be attacked and trolled. 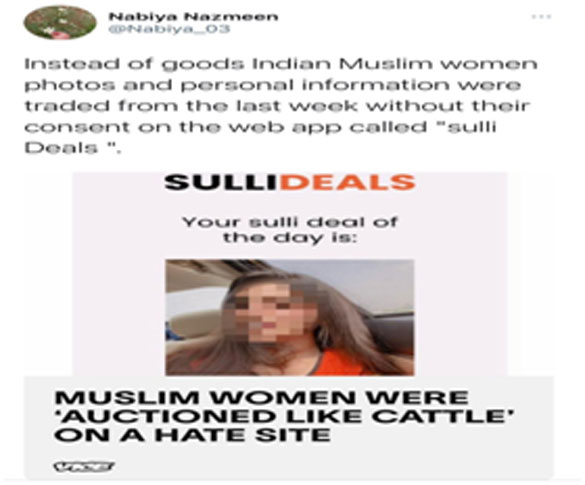 Muslim Women and the online gaze

Sulli, a pejorative term used by masculine hindutva trolls for Muslim women as “available cheap hoars” auctioned for pennies is a planned and strategic cyber attack of shaming and silencing upward moving independent Musilm women who speak their mind . “Sulli”  typically operates like cyber rapes to domesticate and tame modern, educated and informed Muslim women. The growing visibility of Muslim women on social media platforms poses a threat to the masculine hindutva ideology, sulli is thus a typical modus operandi used to denigrate and coerce them into quiescence. One has to just jog one’s memory of Tanishque advertisement  not so long ago depicting Hindu woman marrying into a Muslim household which was taken off precisely because of the army of vile abusive trolls mobilised into violent attacks on  Tanishque showrooms for promoting composite culture. It’s not surprising that these spiteful trolls are brazenly played out in real life  through violent love jihad campaign resulting in  notorious anti-conversion bill with more and more inter-religious couple seeking court protection. The ‘sulli deals’ is not just any cyber crime against women; it’s a sustained attack on Muslim women because of their apparent muslimness with the sole objective of suppressing and degrading them into nonexistence. Undoubtedly such reprehensible acts have psychological bearings, as on most of the occasions women/victims are blamed for the online abuse meted out to them. According to Amnesty report61% of women suffered from low self esteem and loss of self confidence as a result of trolls, around 50 %experienced stress and anxiety,  around 41%  felt threatened with their physical safety,as high as 76 % of women restricted and limited their online opinions signifying how online abuse as been successful in terrorising women into muted being.

However  strong women like Hana Khan, a commercial Pilot whose pitures were uploaded on the debauched ‘sulli deals’ app registered an FIR and is reluctant to give up the fight untill the culprits are cought. 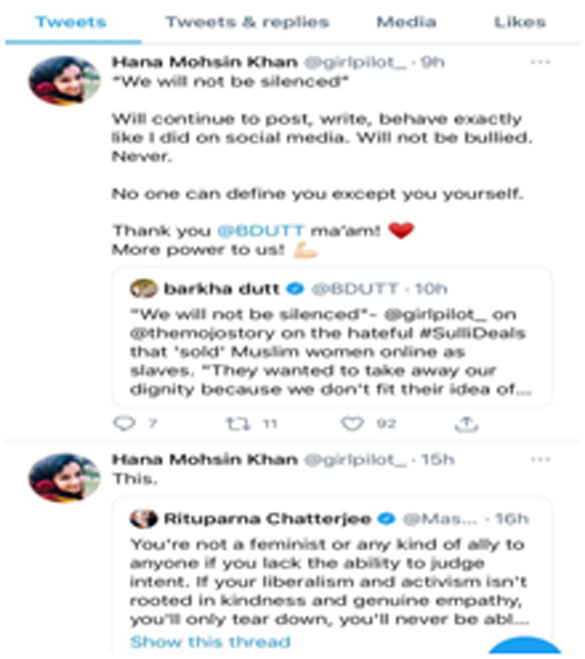 The eerie silence and belated condemnation of the ‘sulli deals’ is also suggestive of the status of minority women in the country. As per the Amnesty report, disadvantaged and minority women are more likely to be harassed and trolled than others. The abject denigration of Muslim women as titillating sexual entities indicates the wanton hindutva militant masculinity to insult and humiliate Muslim men by its desire to exploit and control Muslim women’s sexuality. Muslim women’s bodies (often covered) become a site of conquest and supremacy. Factually large section of Muslim women does not wear burqa yet they are stereotyped and portrayed in media with burqa as a necessary part of their being. Read in that context, ‘sulli deals’ offers a voyeristic and eroticised fantasy of disrobing Muslim women and pushing them out of their protected and secure inner quarters (burqas) to the market as ‘common goods’, available to all, subject to bidding. ‘Sulli deals’ seems to mimic the colonial oriental fantasy of veiled Muslim women who remained remote and inaccessible to the colonial masters which then resulted in propagating the myth of promiscuous and lascivious Muslim men and their exotic harem where Muslim women were imagined   as  sexual slaves. In replicating the neo colonial misadventures with imperialistic entitlements to the Muslim women’s colonised bodies, ‘sulli deals’ use of advance  technology in the virtual world supported by the communal and  divisive  sentiments where women are reduced to their body parts in a mock auction simulating virtual rapes, is a predictable tragedy of a calamitous society and a looming dystopia.

The daring anti CAA protest at Shaheen bagh, New Delhi, was spearheaded mainly by Muslim women. This epic long sit in protest by Muslim women redefined women activism despite burqa and hijab. While unrelenting, united and unafraid Muslim women were breaking all stereotypes, one could hear  snide remarks about Muslim men hiding behind their women and told to wear bangles (chudis).  The feminisation of Muslim men  in order to challenge and mock their masculinity  was aimed at  weakening of  the women led protest. Pregnant student activist Safoora Zargar was arrested under the draconian UAPA (Unlawful Activities Prevention Act) at a time when the country was reeling under the devastating effects of  Covid-19 pandemic and unprecedented sudden nationwide lockdown.

Safoora vitriolic virtual onslaught began with #SafooraZargar  trending on Twitter and a series of slanderous tweets orchestrated  to assassinate her character and slut shame the young student activist by making her morally repugnant. Labelled as “shaheen bagh ki sherni” in sexually explicit tweets, her protest and activism was disparaged and Safoora was lecherously dismembered just like the women on the ‘sulli deals’ app. Shaheen bagh became her honeymoon without condom. The fact that she is married was conveniently ignored and “biryani” in exchange of sex became the dominant discourse emboldened by vivid vulgar graphics. Predictably, the unborn child was ridiculed by casting aspersion on its legitimacy. Thus no efforts were spared to quash and quell her spirit to fight.

Undoubtedly “sulli deals” attacks Muslim women in sexualised communal society yet it does bring us to the larger concern of the rise in number and variety of cyber violence against women. The perpetuation and proliferation of misogyny in the age of omniscient internet has acquired epic proportions.

And in the absence of  any proper regulation and laws, cyber VAW (Violence Against Women) operates in the most damaging manner. The anonymity it offers (as in the case of unidentified ‘sulli deals’ app) to the victims helps in violating the laws with impunity. The auto mode nature cyber operations make cyber VAW effortless and the availability and affordability of various technologies makes cyber VAW commonplace. Unlike other VAW, cyber VAW by its nature gets reproduce and eternalised with the graphic images and lewd remarks preserved indefinitely at a heavy psychological cost and post traumatic stress disorder.

Cyber VAW ranges from hacking and impersonating the account to take victim’s personal information and images, online stalking and monitoring victim’s activities, luring victims into traps, trolling, cyber bullying. Furthermore revenge porn is a recent addition to these crime when an individual post intimate videos or images of his/her partner online with the lone purpose of publically shaming and destroying her life, and in most cases it is the female partner who has to bear such virtual humiliation that has the potential to harm her life, often resulting ostracisation from family and in extreme cases, suicides. With such far reaching ramifications for women, cyber crimes and VAW needs to be dealt with iron clad laws and severe punitive actions.

Dr Amina Hussain is Assistant Professor in Lucknow. She writes on gender issues more particularly working on Muslim women. She has recently edited a volume on “The Dynamics of Gender: New Approaches in Feminism” and is currently working on “Rethinking Muslim Women and Feminism”.