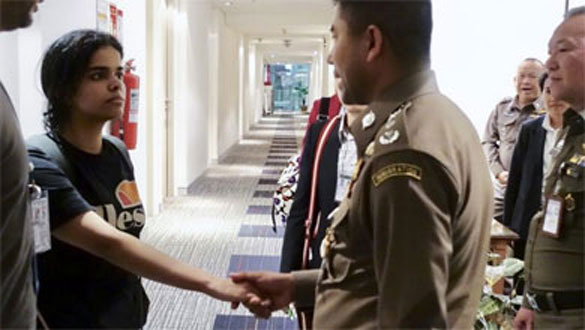 A Saudi woman’s ongoing bid to flee her country via Thailand this week threw the kingdom’s male guardianship system into the international limelight, setting in motion a showdown between Saudi Arabia’s restrictions on women and the United Nations’ asylum process.

Australian authorities on Wednesday said they were considering a request by the United Nations High Commissioner for Refugees to resettle 18-year-old Rahaf al-Qanun. The agency has yet to comment on the status of her asylum request.

Qanun on Saturday launched a call for help via Twitter from a Bangkok airport where her passport was initially confiscated. She is now staying at an undisclosed location in the Thai capital Bangkok while the UNHCR processes her request.

Saudi Arabia’s charge d’affaires in Bangkok, Abdalelah al-Sheaibi, was stone-faced as he discussed his government’s displeasure with the limelight in a meeting with Thai officials.

“She opened a Twitter account and her followers grew to 45 (thousand) within a day,” he complained, his comments filmed and published to Twitter on Tuesday by local journalists.

“We would have hoped that you’d have confiscated her cell phone – it would have been preferable to taking her passport,” Sheaibi said, eliciting timid laughter from the translator.

The presumption of authority over an adult is indicative of Saudi laws and social attitudes that govern the lives of women, regardless of age or whether they are no longer considered a minor by the United Nations, which classifies people adults from age 18.

While Saudi Crown Prince Mohammed bin Salman has been steadily easing restrictions on women, notably granting them the right to open their own businesses and to drive cars, the guardianship system remains in place and authorities remain sensitive to social codes.

To ease any doubt about her online identity, Qanun posted her first of a string of videos from the airport with the caption: “I’m a real person and still breathing, but I’m not sure I’ll survive if the Saudi Embassy doesn’t stop pursuing me.”

Qanun hails from the province of Al-Sulaimi in the Saudi interior, where she told Asia Times that her father, Mohammed al-Qanun, is the governor.

In Saudi Arabia, she would not be able to travel abroad without the permission of a male guardian, so Qanun took the opportunity during a family visit to Kuwait and boarded a flight to Bangkok with the intention of reaching Australia.

Upon landing, she says her passport was taken by a man whose business card she posted to Twitter, which identified him as Ali Alanazi, the local security supervisor for Kuwait Airways. Alanazi, reached by Asia Times, said that it was the Thai border control that took the young woman’s passport and that the airline was only cooperating with the process after her visa was rejected.

“It was the Thai authorities that took her passport for processing and booked her the hotel. I only gave her my business card in case she needed anything or had any questions,” he said. Alanazi noted that a representative from the Saudi embassy had arrived to the airport to accompany the young woman back as she was considered a youth.

The Saudi embassy in Bangkok has rejected any role in the seizure of Qanun’s passport. In a statement, Saudi authorities said the young woman was being sent back by the Thai government due to the lack of a local hotel reservation and return ticket as per immigration laws.

The young woman claims she was passing through Bangkok in transit. “I have a ticket from Thailand to Melbourne, Australia,” she told Asia Times via direct message. “I think my email has been hacked because I can’t access the ticket.”

Thai immigration officials also said there was no record of an airline ticket onward, which should have allowed her to pass through Bangkok.

After being informed by immigration that she would be placed on a flight back to Kuwait, the young woman barricaded herself in her airport hotel room and began launching a barrage of appeals to the Twitter sphere. She claimed her life would be in danger if she was returned to her family.

From her makeshift bunker, Qanun insisted her case was an urgent asylum matter and her tweets garnered the attention of prominent activists, human rights groups and Bangkok-based diplomats, with the German ambassador voicing his concern to Thai authorities.

On Monday, the head of Thai immigration, Lieutenant General Surachate Hakparn, told the press he would not force a deportation if the woman’s life was found to be in danger.

“Since Thailand is the ‘Land of Smiles,’ of course we won’t send someone to their death,” he said.

The UNHCR was granted access to Qanun “in order to assess her need for international refugee protection,” and is expected to reach a decision by next week.

A String of Forced Returns

Qanun is not the first woman to be impacted by the long arm of the Saudi guardianship system.

“Saudi has a pattern of forcibly returning women trying to flee to Saudi Arabia, with the collusion of foreign governments. Rahaf is not the first case. Recall – adult women [are] not free to travel without [a] guardian’s permission,” tweeted Human Rights Watch’s Middle East director Sarah Leah Whitson.

In Turkey, two Saudi sisters have been held in police custody since May 2017 after fleeing the kingdom in February that year. Ashwaq Hamoud, 31, and her sister Areej, 29, say they fled abusive male family members. Both had attempted to apply for Turkish residency, but are now facing deportation in an ongoing appeals process.

Another Saudi woman, Dina Ali Lasloom, was in April 2017 returned to Saudi Arabia from the Philippines – also against her will as she faced a forced marriage, according to a report by HRW. An airline security official told the rights watchdog that he witnessed three Middle Eastern-looking men go to the room where Lasloom was being held at an airport hotel.

He then “heard her screaming and begging for help from her room, after which he saw them carry her out with duct tape on her mouth, feet and hands.”

The Saudi embassy at the time issued a statement referring to the case as a “family” matter.

Then in March 2018, the prominent driving activist Loujain al-Hathloul was detained in Abu Dhabi, the capital of the closely allied United Arab Emirates, and forced on a plane back to the kingdom, according to fellow activists.

Hathloul was placed under a travel ban, warned to stay off social media and finally rounded up as part of a crackdown on women’s rights advocates last summer.

While such operations often rely on cooperative governments, Saudi authorities have also pursued dissidents in more risky scenarios – most notably Washington Post journalist Jamal Khashoggi, who was murdered in the Saudi consulate in Istanbul in October 2018, sparking a tense public reckoning with Turkish authorities.

While Khashoggi left his phone outside the consulate, Qanun held onto hers, using it to launch a now-viral asylum appeal via social media.

“Because of Rahaf’s quick thinking, this shift in media attention and popular support for her case seem to have won out so far because the male guardianship system is so indefensible,” HRW deputy Middle East director Michael Page told Asia Times.

Should Qanun gain asylum in Australia, it could spark a new wave of challenges to the Saudi guardianship system abroad and impact gradual changes at home.