When Women Joined the Jihad in Syria

Amira, a Syrian woman from Aleppo, operates a checkpoint in a rebel-held district, wearing a rifle and a Hijab fashioned from the black flag of jihad. Before the revolution, she was relegated to the domestic sphere, but today, she is a soldier in a woman's battalion of the Islamist al-Ikhlas (Loyalty) Brigades. Prompted by the killing and displacement of family members, Amira transitioned from the home to the front line, from housewife to revolutionary, and from raising her children to tending to war casualties. 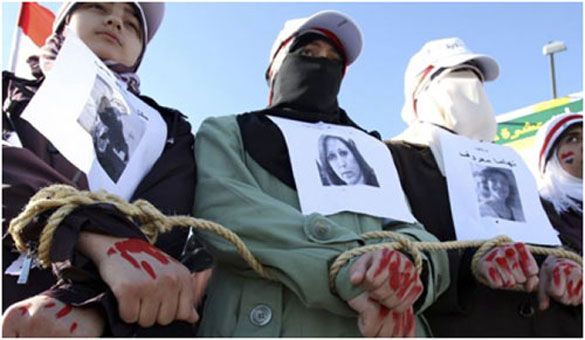 Syrian women bind their hands with ropes while displaying photographs of women currently held in Syrian jails, Amman May 15, 2011.

While Sharia (Islamic law) does not prohibit women from holding jobs in the public domain, traditional religious Syrian Sunni culture places the home as the focus of women's devotion and activities. But for Amira and women like her, Assad's regime brutality has forced them to defy these traditional female roles and join the ranks of the Mujahideen (rebel fighters) from Aleppo in the North, to al-Qalamoun near the south, Abu Kamal in the East, and Homs in the centre.

The first female insurgent battalion was formed in Homs province last year after the Houla massacre, in which at least 108 civilians were killed, including 34 women and 49 children. The Nusra Front, an al-Qaida affiliate operating in Syria and a U.S.-designated terrorist organization, rejects in principle the participation of women in combat. But the majority of the Mujahideen value female battalions.

Although women’s influence in the rebel command structure is limited, and the military advantage they confer is unclear, they raise the morale of male fighters. By providing emergency care, food and shelter, and, in some cases, fighting power, these battalions encourage the Mujahideen to stick out the revolution rather than resign themselves to refugee camps away from the battlefront.

Turmoil throughout the Muslim world has prompted women to join men on the frontlines. Over 4,400 soldiers from the Women’s Basij, a paramilitary organization created by the Iranian regime to defend the ideals of the revolution, died in battle during the Iran-Iraq War (1980-88). Women in Afghanistan, who lived under house arrest during the Taliban, fought in Special Forces commandos against the mullahs. And even Saudi Arabia – a country where women cannot even travel, drive, marry, divorce, and be admitted to a public hospital without a male guardian’s permission – agreed in May 2012 to recruit female soldiers to its National Guard.

Women warriors in Syria are not an exclusively Sunni opposition phenomenon. One in every five fighters is female in the Kurdish People’s Protection Units (YPG), which is linked to the Democratic Union Party (PYD), a U.S.-designated terrorist organization predominately active in north and north-eastern Syria. Bashar Assad himself has also recruited up to 500 women into a paramilitary force called the Lionesses for National Defence, a subsidiary of the regime’s key counter-insurgency arm. But these Lionesses, who wear army camouflage and shun the Hijab, are very different from Islamist opposition battalions.

Women are thought of as one of the most acute victims of the rising tide of extremism in the Arab Spring. Although not necessarily the reality, the caricature of Islamists is of a boys’ club of conservative men that overpowers reclusive women. But for these female fighters, victimhood is not a result of the increasingly Islamist Mujahideen; instead, it is what prompted them to join the Mujahideen ̶ to go on the offensive against the regime and at the same time defend themselves from it. Some women’s battalions in Syria claim to be independent while others function as subunits within male-led brigades such as al-Ikhlas.

In Syria, women have not taken up arms by choice. “We joined [the war] out of necessity,” one of them told a reporter on the independent “Syria Tomorrow” television program on June 23. She was a member of an all-female battalion called Our Mother Aisha, named after the exemplary Muslim woman who defended the teachings of her husband, the Prophet Mohammed, with a pen and sword. Although a heroine to the Sunni opposition, the battalion’s namesake speaks to the sectarian divide in Syria. The regime’s Shia Muslim supporters tend to view Aisha with contempt for her participation in the Battle of the Camel (656 AD) against Ali ibn Abi Talib, considered by Shia to be the first legitimate caliph based on his kinship with the Prophet. Our Mother Aisha, made up mostly of university students and graduates from throughout the country, claims to "fight in the same trenches" as Mujahideen from the Free Syrian Army (FSA), the main umbrella body of the opposition. Male Mujahideen, affiliated oftentimes with extremist groups, train the battalion and then arm it with light weapons.

On March 10, the female Summaya bin Khayyat Brigade, allied with the FSA, posted on its Facebook page an image of an armed woman, covered in Syrian and Islamic flags, beside a written vow to oppose all enemies of religion – Jews, “Russian Communists,” rawafid (rejectionists), a derogatory term for Shia Muslims, and other Kuffar, a term used by extremists for people who stray from what they see as the Islamic version of truth. The Summaya bin Khayyat Brigade operates in al-Nabak, 80 kilometres north of Damascus, and is named after the first person to have been martyred for converting to Islam.

Another female battalion, the Daughters of al-Walid Brigade in Homs, announced in its founding statement on YouTube its mission to “take care of the wounded, help the refugees and the aggrieved,” and to shame the regime by documenting the atrocities that it commits in the media. The group takes its name after Khalid Ibn al-Waleed, a companion of Mohammed known for commanding the Prophet’s forces with military tact and valor.

The Daughters of al-Walid train each other to use weapons to fend off Assad “gangs” and the sexual crimes that they perpetrate. Rape, not shelling and air raids, is the main cause of flight for Syrian refugees in Jordan and Lebanon, according to the International Rescue Committee, a lead relief and development organization. The heightened shame in a society where modesty and honor are paramount has even led some families to marry off their daughters to “protect” them from rape. But for women fighters, a rifle, not marriage, is their safeguard.

In regard to repelling sexual violence, female battalions can be seen as a positive development. Women fighters are no longer the typified victims of brutal men, defenceless against rape and unable to participate in the crafting of their country’s future. Also, although these female battalions have worn the black flag of jihad, which is also the Nusra Front’s banner, their formal ties to extremists are inconclusive. Some of these battalions want to challenge the Front’s rejection of their participation in the revolution by affirming the commitment of Muslim women to unseat Assad. Others wear the flag because it is a potent symbol that augments the psychological war against the regime. Female battalions may also benefit from financial support by Islamists, or they may even wear the flag as an affirmation of monotheism (There is No God but Allah).

These women warriors are threatened but also threatening. The Islamist orientation of many of the battalions is shorthand for Syria's tumble into sectarianism. By fanning sectarian fears, Assad has retained power, and Islamists have gained a more receptive constituency from which to recruit. Mounting desperation means that Hezbollah and Assad will be more beholden to the Iranians than ever, while greater numbers of Sunnis will espouse the black flag of jihad.

From cyber activism to direct participation in demonstrations, women have played a pivotal role in the wave of protests and regime transition that has swept the Middle East and North Africa. Female participation in Syria’s revolution has been more militarized, but the majority of women are involved behind the scenes, taking care of the injured and preparing food for fighters. The country’s civil war has been a political and security earthquake, but also a cultural one, challenging conservative norms of Islamic femininity.

While these battalions are by no means a conscious feminist backlash against the domesticity of women, these Joans of Arc are playing a role in the struggle for a post-Assad Syria. The war is pulling in women, but the lasting effects of their participation are inconclusive: if the Islamists come to power, women may once again find their power in peacetime is circumscribed by the home and not the battlefield or the political arena.

Adam Heffez is a research assistant in the Program on Arab Politics at the Washington Institute for Near East Policy.