If Muslims In The US Can Do It, Why Can’t We Try Speed Dating In Pakistan? 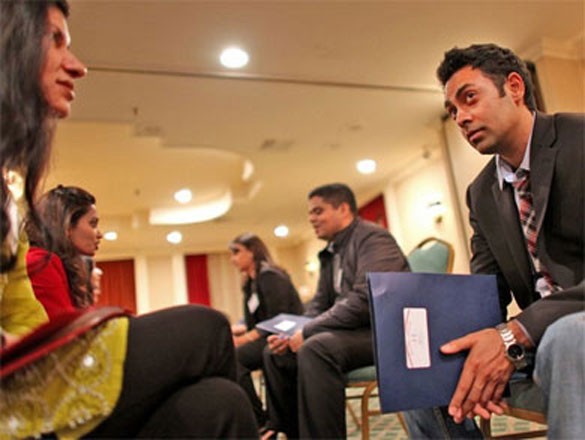 A five-minute date. Arifa Zulfiqar and Jay Zaman getting acquainted, quickly, at an event at a Queens hotel. Photo: New York Times/Yana Paskova

The Pakistani society has seemingly made social progression in a number of areas; the one thing that is still stuck in a painful first gear is the way Khandaani (family oriented) families tend to find matches for their unmarried children.

The grooms’ family still have the upper hand; their mothers are still the villains scouting every home for the match of their choice. On the other hand, the girls’ side still remain in the meek ‘beggars can’t be choosers’ mind-set. The word Khandaani is used here to identify the families who, despite being well educated, continue to consider it taboo for their children to bring home a partner of their own choice.

If in these classical families, the man displays the guts to voice his choice, his poor wife is forever labelled a ‘fast, cunning, no-good who netted the son hence ruining him for life’. On the other hand, if the girl happens to voice her choice, she is forever shunned by all dear and near, and even the not so near and dear, as a ‘Paraya’ (stranger) whose bad morals can influence and corrupt a good girl living a mile away. Considering that this stumbling road block in the marriage scene is in a majority of families, there is a perfect way to fast forward the situation from the 15th to the 21st century; single events and speed dating.

Single events or speed dating are now the rapidly accepted manner of finding the right man or woman in the Muslim community in the US. The term speed dating may not be looked upon kindly by the khaandani families living anywhere. However, there is no element of actual dating in the event and although it is similar in function to a singles event, it is chaperoned.

So what is a singles event?

As the name implies, singles events are semi-formal get-togethers where people interested in marriage can meet and explore if they find someone who might be a good match for them.

In the manner that these events operate in the American Muslim community in the US, the only thing that they have in common with the western culture is the name. Unlike the western society, there is no dating and there is no free mixing of singles. The event is organised in a good restaurant or other venues and is advertised beforehand.

There is a registration fee that includes entrance and lunch or dinner. The men and women attending are required to bring in a parent or another older family member. The organisers are at the door meeting each guest, making sure they had registered. They also meet the family member accompanying the candidate. This way they screen out any party crashers and ‘going just for the fun’ individuals at the door.

Of course, there are often people who register, pay the fee, and bring along phony elders just for the fun of it.  But it is easy to spot them and this becomes their first and last opportunity to play the prank since they are never admitted to such events again, at least not in the same area and by the same organiser.

Once inside, the event starts with a short speech by the organiser and then the men are invited by turn to take the microphone and introduce themselves to the guests. They give their names and their educational qualifications, along with what they desire in a woman. Although the women are welcome to do the same, they are usually too shy to use the microphone.

Once the introductions are made, the guests start to mingle. If a certain man had caught the eye of a particular female-side, then they single him out and attempt to strike up a conversation with him. Yes, it sounds like a bakra mandi (cattle market) but then, isn’t it about time we turn the tables on the men, who have always had the upper hand in visiting every female’s home in the neighbourhood, with his entire family scrutinising her? Jokes aside, the singles events process isn’t as bad as it sounds.

As opposed to the above, there are also single events where there is no registration fee and anyone can liberally attend. Moreover, there is also no compulsion to bring an elder. However, these are usually avoided by people where the marriage decision is jointly made by the man/woman and their respective families. Events that are ‘free and open to all’ tend to turn more into the western style ‘single dating, mingling and having fun’ type of affairs.

Even though majority of American Muslim families leave the choice of partner entirely on the children, they still wish to be involved in the process of evaluating the legitimacy of the potential in laws. A large majority of the children too, no matter how highly educated they are, do respect their parents’ input in the matter. Therefore, families like these always go to the formally organised events since they don’t have time to waste and are serious about finding a good match.

Viewing singles events in the context of Pakistan, properly organised ones could be a breath of fresh air in the present, stifling, matchmaking scene in the country. But of course, like all things that could potentially be very good in the long run, this idea too will be met with gargantuan levels of resistance. Not only that but all sorts of accusations will be hurled at those living in amreeka (America) who not only allow such ideas to flourish but also have the ‘audacity to corrupt those in Pakistan with them’. However, regardless of what they say, singles events could help in:

- Maximising parents’ time looking for good matches, by bringing all likeminded people under one roof at the same time.

- Reducing anxiety caused to the females’ parents, who are otherwise forced to sit and wait for the right man to land in their lap.

- Eradicating mental distress caused to girls who have to repeat the entire process of getting dressed, look good, serve tea, answer questions, wait for to hear back from the boy’s family, repeatedly.

- Eradicating the discomfort many decent male families feel in saying ‘no’ to a girl’s parents.

- Boosting the self-confidence of women when they meet other women who are also in search of a good spouse.

The list goes on. Of course, there may be negative aspects in such events as well, as there are in any good plan. However, weighing the pros and cons, I personally feel that the pros outweigh the cons. The only basic requirements are respectable venue, respectable sponsors, and pre-registration to make sure the attendees are genuine. For someone with the right intention, the rest of the details shouldn’t be too hard to handle.

In effect, the problem of matchmaking in Pakistan may be likened to a marauding cat in the society. The question is, who will be brave enough to take the first step to bell this cat?

Aalia Suleman is a freelance writer and poet who is keenly interested in the status of women in 21st century Pakistan. Her writing also zones in on Pakistan's new social and political status on a redefined global chessboard. She has a master’s degree in English Literature and blogs and invites debates at 'Socio-politically Pakistani'.