In recent times, Sufi poetry has gained immense popularity all over the world. Eight hundred years after his death, Mevlana Jalaluddin Rumi reigns as the most popular Sufi poet in the West. However, most published translations of Mevlana’s poetry are devoid of his religious discourse — the love that he writes about is often misunderstood as worldly love, and he is presented as a mystic without Mohammad, without Islam. In expunging the Islamic element from popular Muslim mystic poets, the West loses out on the opportunity to engage in dialogue with Islam. 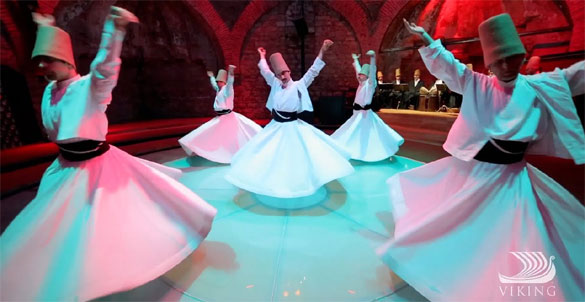 The Mevlavi Sufi Order crystallised in Turkey around Mevlana Jalaluddin Rumi who died in 1273 AD. Universally recognised as one of the greatest spiritual figures of all times, the Mevlana was born in the Afghan province of Balkh where his father, Bahauddin Walad, was a renowned Islamic scholar.

The Mongol oppression of Central Asia led the family to migrate to Konya, which was then governed by the Seljuks of Rum. The mystic poet learnt Islamic theology from his father, who headed a seminary in Konya. After his father’s death, the Mevlana took over as the head of the religious seminary. At the age of 37, Rumi met his spiritual master, Shams Tabrez, who transported the scholar from the sober legalistic understanding of religion to discovering the Sufi path. Tabrez did not negate the disciple’s knowledge of Islamic theology but inspired him to travel beyond the laws to discover new spiritual horizons.

Rumi’s Mathnawi, which contains around 26,000 verses, is an acknowledged masterpiece on Sufi philosophy. Rumi dwells on the theme of love, explaining that realisation of the self is a reflection of the Lord. Reputed for their devotion to music and whirling movements during meditation, followers of the order are called “the whirling dervishes”. Kabir Helminski, a reputed contemporary scholar and shaykh of the Mevlevi Order, describes the state of the one who whirls: “There are many dimensions to this experience. Firstly, one has to be able to turn, and to do that one has to become empty inside. Empty, free from all internal dialogues, but fully aware. A state of balance is required to turn on an axis, so centred in one’s own being”. 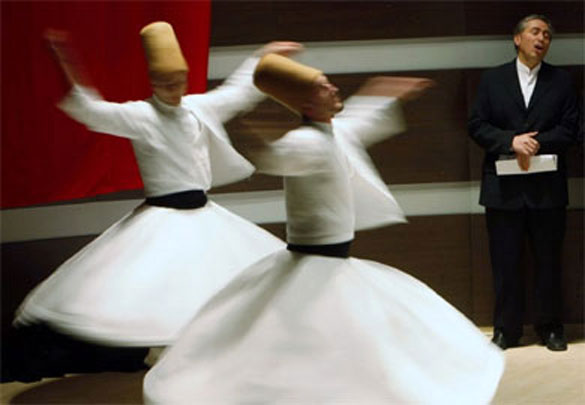 Whirling is not a trance, but an exercise in mindful presence where the dervish is conscious of several things at once. The whirling dervish’s thought is uncluttered and he is in harmony with the other participating dervishes. He establishes a connection with the shaykh who leads the ceremony and takes the conscious step of opening his heart to the Divine. While whirling, the right foot is lifted up to the knee while the left foot becomes the axis on which the whole body revolves, anti-clockwise. With each revolution “Allah” is pronounced inwardly. The arms are extended, the right palm turned upwards to receive Divine Grace and the left palm turned downwards, bestowing on the earth the Divine energy that passes through the heart. The dance is divided into four sessions of whirling, each around 10 minutes long, called salaams. The last salaam represents union with the Divine, which is when the shaykh steps forward and recites a prayer, silently. 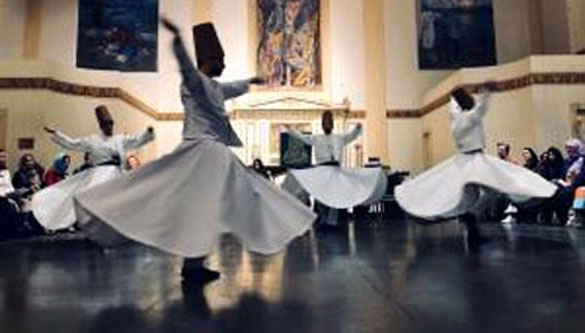 Sufi whirling presents an example of a spiritual tradition where music and movement are the basis of a deeply contemplative practice. It is designed to maximise Divine remembrance which in Islam is the highest of all human activities. The dervishes who meditate in the tradition of their Sufi master Rumi begin their dance with a naat, poetry in honour of Allah’s Messenger:

(O God’s beloved, O Messenger of God — unique are you!

You chosen by the Lord of Majesty — so pure are you!)

The author is a Delhi-based writer and author of Sufism: The Heart of Islam. She can be contacted at sadiafeedback@gmail.com