Baba Farid: “May God Endow You with Pain”

Pain as a Purifier

It was a saying of Baba Farid that changed my life forever. About a decade ago, while reading a book on the great Sufi’s life, I discovered that he blessed people saying, “May God endow you with pain.” The passage forced me into self-reflection and helped me understand that pain is a purifying process. I discovered that spiritual endeavours leading to states of ecstasy were usually rooted in grief. God, by His own admission to Moses, revealed that He lived in broken hearts. Sufis teach that both affliction and bounties are the blessings of God. 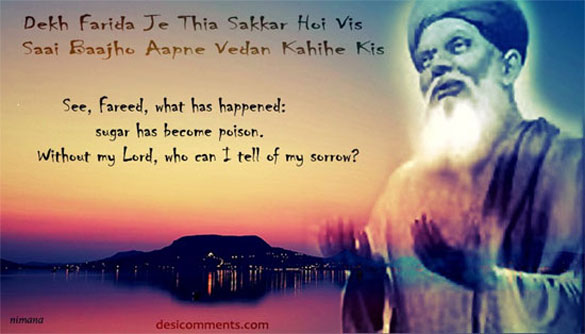 Baba Farid, the first Sufi poet of Punjab, inherited the spiritual mantle from Khwaja Qutubuddin Bakhtiar Kaki of Delhi. He settled on the banks of the Sutlej, and his village Ajodhan, came to be called Pakpattan, “the ferry of the pure”. Baba Farid lived a life of contemplation and poverty advising, “If you desire greatness, associate with the downtrodden.” He had a large family that suffered as a consequence of the severe restrictions he imposed upon himself, remaining absorbed in the worship of God.

Baba Farid composed meditation prayers in Punjabi for his disciples, many of which are still recited by his devotees. His verses had a deep impact on Guru Nanak. The Guru Granth Sahab, the Sikh Holy Scripture, contain 134 verses of Baba Farid.

If I knew that I would die never to return again, I would not follow the false ways of the world, nor let my life be spent in vain.

In your speech be true, in your actions be right, and spread no falsehood.

The ascetic discipline and brotherhood of Baba Farid’s Khanqah, living quarters remains an outstanding example of the life of the early Chishti Sufis.

The dervishes lived and worked in one large room. Visitors were welcome and the door remained open till midnight, with the table always spread for unexpected guests. The residents served their Master, occupying themselves with prayer and studies. Baba Farid encouraged a sound education and showed a keen interest in poetry and music. He disseminated Sufi teachings through popular songs, influencing the population, particularly women who took to singing mystic verses while doing their daily work.

Baba Farid’s assemblies attracted scholars, merchants, government servants, artisans and mystics from all sections of society. A wide range of discussions were held, interactions between Hindu and Muslim mystics became frequent and meaningful, reflected in every area of social life.

The topics fuelled the interests of yogis whose beliefs were founded on Hatha Yoga. The Sufis freely borrowed principles of breath control, meditation and concentration from Hindu spiritualists.

Despite his fame, Baba Farid spent his last years in extreme poverty. Since there was no money in the house to purchase his shroud, Sufi Amir Khurd’s grandmother provided a white sheet to wrap his mortal remains. Baba died on 5 Muharram 1265 AD and lies buried in Pakpattan, a few hours’ drive from Lahore. His spiritual successor is Hazrat Nizamuddin Auliya, whose Dargah is in Delhi.