The recent communal riots across Bangladesh after Durga Puja were a well-planned conspiracy by the Islamists of Bangladesh who have been baying for the blood of Sheikh Hasina who toppled their government and put an end to an era of communal violence and terrorist activities.

The desecration of the Quran was committed by a Muslim and the video of the incident too was circulated by a Muslim. It was not the first time that communal riots against the Hindus of Bangladesh were staged on the occasion of Durga Puja, the major festival of Bengalis of the subcontinent. In 2001, anti-Hindu riots had been unleashed after the BNP-Jamaat coalition won the elections.

That the communal violence against the minority Hindus this year also broke out on the occasion of Durga Puja in Bangladesh points to the same modus operandi and its perpetrators. The BNP-Jamaat combine considers Hindus the vote bank of the Awami League and so they think that as long as the Hindus remain in Bangladesh, the Awami League led by Shaikh Hasina will rule the country as the Hindus tilt the balance in favour of Awami League in at least 50 constituencies.

The recent riots point out the rise in strength of Hefazat and other religious parties backed by the BNP in the country and some of the blame goes to Prime Minister Shaikh Hasina who has succumbed to some of the demands of the Islamists under political pressure. Secondly, as happens in a democracy, many Hefazat and Jamaat elements have entered Awami League owing to its success and have been working for them. That’s why Sheikh Hasina expelled some of her party leaders for being involved in the riots.

Pak-backed Islamists have caused violence and staged violent protests a number of times to unsettle Shaikh Hasina’s government and the anti-Hindu riots is one of them. Since Shaikh Hasina government has maintained good relations with India, an anti-Hindu image of Bangladesh government will have a bad impact on their relationship. Shaikh Hasina is the target of the Islamists for protecting and safeguarding the rights and lives of the Hindus and the Hindus are the target of the Islamists for supporting the Awami League government in elections. In the following article, Pinak Ranjan Chakraborty sums up the dilemma of the secular parties and of the minorities in Bangladesh.

The March Of Bigotry In Bangladesh

The rioters chose Durga Puja, the most important religious festival among Bengalis on both sides of the border, to cause maximum hurt to the Hindu community. The police were caught napping initially, though it sprang into action belatedly to control the situation. Paramilitary forces have been deployed and large sections of the population have come out in support and solidarity with their fellow Hindu citizens. Hindus are soft targets and rarely fight back, making them easy prey for Muslim mobs. Angry Hindu leaders have blamed the police for apathy.

Pogroms against Hindus in East Pakistan occurred regularly under state patronage. Insecurity induced by communal violence forced Hindus to migrate to India. This was repeated before and during the 1971 war. Grabbing Hindu-owned properties and land was and remains a major factor in Bangladesh, where violence against the community has occurred intermittently during the 50 per cent of the population in 1947, the Hindu population has dwindled to less than 9 per cent in Bangladesh today. 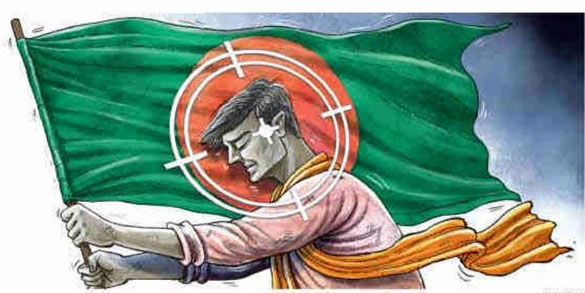 In 2001, Bangladesh witnessed large-scale communal violence before Durga Puja, when the Bangladesh Nationalist Party (BNP)–Jamaat-e-Islami (JeI) coalition won the election. The BNP-JeI cadres had unleashed similar violence against the Hindu community. Anti-Awami League (AL) parties view the Hindu community as a vote bank for the AL because of its commitment or at the least lip service to secular values. The Hindu vote is large enough to tip the balance in at least 50 seats. PM Sheikh Hasina, when in power, gives space to Hindus in her administration and tries to be inclusive. Hence, the BNP-JeI opposition and other anti-AL right-wing and Islamist parties, with their communal outlook, believe that reduction in the Hindu population gives them an electoral advantage.

Around 90 per cent of Bangladeshis are Muslims and they are largely moderate and tolerant. Bangladesh's 1972 Constitution was a secular one, till secularism was expunged by the military dictator Gen Ziaur Rahman. The military dictator who succeeded him, Gen Muhammad Ershad, introduced Islam as the state religion in the Constitution. For them, Islamic nationalism was a fundamental aspect of national identity. Both joined hands with Islamist parties to further their political ambitions. PM Hasina has reintroduced secularism back into the Constitution but Islam as the state religion remains.

Muslim bigots have thrown down the gauntlet and challenged PM Hasina. She will surely pick up the gauntlet, given her steely determination. While reassuring the Hindu community in her message on the occasion of Durga Puja, she has warned that she will hunt down the perpetrators. Hindu leaders in Bangladesh have consistently alleged that some AL leaders are involved in uprooting Hindus and grabbing their properties. During the current violence, the same allegations have surfaced again. The agent provocateur in the Rangpur violence turned out to be from the youth wing of AL. They are taking advantage of the AL to insulate themselves against their anti-Hindu activities. The thin veneer of secularism in Bangladesh is invariably trumped by these factors.

Who are the conspirators and what is the significance of the timing? Suspicion for planning the violence has focussed on the JeI. Blasphemy has been weaponised by fanatic Islamist organisations in Pakistan for quite some time. In Bangladesh, the Islamists have learnt fast to emulate their Pakistani counterparts. They have demanded a blasphemy law, apart from transforming Bangladesh into an Islamic state ruled as per the Sharia. JeI is notorious for collaborating with the Pakistani army in committing genocide in 1971 and is widely regarded as Pakistan's proxy. JeI has been thirsting for revenge ever since the war crimes tribunals, set up by PM Hasina, convicted its leaders and executed them for war crimes in 1971. The UK-based IT cell of the JeI, Basherkella (bamboo fortress), has been spewing anti-Hindu and anti-India propaganda for some time, giving traction to the view that the violence was planned in advance.

To balance the crackdown on JeI and decisive action on ISIS-inspired terrorist groups, PM Hasina has periodically engaged with Islamist groups, the latest being the Hefazat. PM Hasina conceded several of their demands like the removal of some statues from public display, expunging content from school textbooks written by Hindus and even recognising degrees granted by Hefazet-controlled madrassahs. Emboldened by such gestures, Hefazat cadres started breaking statues of Sheikh Mujibur Rahman, PM Hasina's father. This led to arrests and a crackdown on Hefazat leaders. The Islami Andolan has long campaigned for an Islamic state that follows Sharia. It openly called PM Hasina a "slave of India" and demanded that for every Bangladeshi killed on the border, at least 1,000 Indians should be killed.

India's ties with Bangladesh, under the stewardship of PM Hasina, has delivered positive outcomes across a wide range of sectors. One key objective of the Islamists is to undermine bilateral ties with India and undermine the unstinted support that all Indian governments have extended to PM Hasina. This objective fits in with Pakistan's anti-Indian goals. Mindful of the growing strategic nature of bilateral ties, India has reacted cautiously. Indian and Bangladeshi Hindu leaders are indignant at India's muted reaction. Across the Cumilla border in Tripura, Muslims and mosques have been attacked and there is apprehension that such acts may proliferate in Assam. Tripura's population is largely made up of refugees from Cumilla and they retain cross-border family ties.

The road to competitive communalism is a cul-de-sac. PM Hasina has obliquely hinted that anti-Muslim incidents in India encourage Islamists to exact revenge on Hindus in Bangladesh. The bigots, however, do not need excuses to further their jihadi agenda of expelling "kafirs" to create their promised Islamic utopia and embarrass PM Hasina's government. Meanwhile, everyone hopes that the culprits will be punished. India must prepare for more Hindu refugees to cross over and seek rehabilitation in the nation. This will render the case for the Citizenship Amendment Act, currently in limbo, more relevant and urgent.

Pinak Ranjan Chakravarty is a former ambassador and Secretary in Ministry of External Affairs and Visiting Fellow at the Observer Research Foundation, Delhi.