Sufis Were Hardly Interested in Conversions; They Were Engaged in Conveying Their Peaceful Messages, not in Converting the Audience 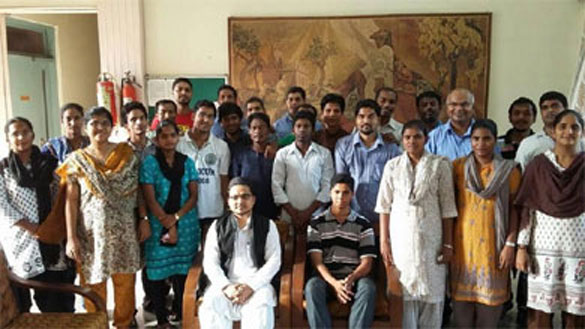 Vidyajyoti College of Theology organised a talk, “The Impact of Sufism on the composite culture of India” on 18th August 2015

In keeping with its age-old dialogue-oriented tradition fostering interfaith harmony, Vidyajyoti College of Theology organised a talk tilled “Experience of Muslims” in its effort to enhance fruitful interactions between Muslim and Christian brethren. Held on 18th August 2015, the talk was meant for striking a lively and vibrant conversation on the topic: “The Impact of Sufism on the composite culture of India”. The Resource Person for this event was Ghulam Rasool Dehlvi, a classical Islamic scholar, an English-Arabic-Urdu writer and a regular columnist with New Age Islam.

Initiating his talk, Mr. Dehlvi said that, “India has been the land of mystics and Sufi saints for ages. Indian Sufism is anchored in humanism, universal brotherhood, peace and pluralism, compassion, goodwill and tolerance, in perfect harmony with the composite culture of this country”. He said, “Sufi teachings are based on pluralistic traditions in full synergy with the notion of unity in diversity”. “Muslim mystics, dervishes and faqirs reached out to every section of Indian society and preached moderate, progressive, multi-cultural and pluralistic Islamic tradition. They achieved popularity by adopting musical recitations called sama or qawwali to create a mood of nearness to God. More interestingly, they often chose Hindi verses so that they could make a greater impact on the composite culture and society of India”, Mr. Dehlvi said. “This was the sole reason behind the wide spread of Sufism in the land of Vedic culture. Thus, the essential and egalitarian values of Islam upheld by Sufis--peace, pluralism, equality, social justice and brotherhood of mankind-- attracted countless numbers of Indians”, he said.”

“The true Sufis should have no room for retrogressive precepts and ritualistic practices in the name of Islam. Among all the mystical movements and spiritual interpretations of Islam, the common cause was walking away from the priestly domination and obsession with false rituals and dogmas”, said Mr. Dehlvi.

Before beginning with the subject matter, Mr. Dehlvi elaborated the basic concepts of Sufism such as tawheed (oneness of God), wahdatul wujud (unity of existence), ilmul yaqeen (knowledge with firm faith), zikr (incantation), muraqaba (meditation), observance of taqwa (God-consciousness) and tawba (repentance on sins), ikhlas (sincerity), tawakkul (contentment), sidq (truthfulness), amanah (trustworthiness), istiqamah (uprightness) and shukr (thankfulness). Mr. Dehlvi said that it is only after mastering these higher spiritual traits that a Sufi draws closer to the Almighty and deserves to be called Wali Allah (friend of God).

After a brief note on the key aspects of Sufism, Mr. Ghulam Rasool Dehlvi came to the point and dwelt on the main theme of the talk. With special reference to the contemporary India, he said that the impact of Sufism can be seen through the prism of arts and culture in the country. “The multi-faceted Sufi tradition reflects an essentially pluralistic and composite culture that connects people of this country beyond a great many barriers. The most redeeming features of Sufism's appeal in India, as anywhere else, are its inherent openness, wide embrace, tolerance and its accommodating nature”. Therefore, Mr. Dehlvi reasoned, Sufism is rightly considered a completely peaceful, non-confrontationist and inclusive spiritual trend in Islam.

Mr. Dehlvi continued: “Muslim Mystics of India were harbingers of sulh-e-kul (peace with all), a Sufi term that essentially means: equal respect for all. ‘Love for all and hatred for none’ was the legacy of Sufis, as enshrined by the pioneer of Chishti Sufi order in India, Khwaja Moinuddin Chisthi of Ajmer, popularly known as Gharib Nawaz (the benefactor of the poor). This legacy greatly impacted their attitude towards other faith traditions.

As a result, they were loved and admired by all and sundry. Kings and commoners, elites and laymen, intellectuals and illiterate ones and the poor and the rich were equally enchanted by the immense sincerity and simplicity in their lives. What actually appealed to all, regardless of caste and creed, was the Sufi saints’ humanism. It was upheld by their shrines and khanqas running across the country as seminaries (madrasas) of mystical learning, experience and enlightenment. The curriculums of those madrasas were so broad and inclusive in their worldview that students and disciples from all backgrounds were cordially welcomed. In such Sufi khanqas and madrasas, devotional songs were composed in different vernacular languages and Sufi music (sima’) was considered a manifestation of complete submission to Allah.”

One of the most glorious impacts of Sufism on Indian society, Mr. Dehlvi said, is the widespread phenomenon of social integration and day-to-day interactions between common Muslims and non-Muslims. “Not long ago, many non-Muslim brethren, particularly from among Hindus and Sikhs, chose to become Murid (disciples) of great Sufi saints. It was the mystical impact of Sufism on composite Indian culture that inspired the Bhakti movement in southern India first and then in northern India”, Mr. Dehlvi explained. He further dwelt on it: “Even Sikhism preached by Guru Nanak was greatly influenced by the Islamic mysticism (tasawwuf) due to its emphasis on monotheism and rejection of caste system”.

In the course of this conversation with the Christian scholars and students, Mr. Dehlvi asked a few questions from the students about the popular Indian Chishti Sufis like Khwaja Gharib Nawaz Moinuddin of Ajmer, Baba Fariduddin of Pak Patan and Delhi's Qutbuddin Bakhtiyar Kaki, Hazrat Nizamuddin Aulia and Chiragh Dilli who left an everlasting and magnetic impact on the elite and common masses alike. Mr. Dehlvi said, “the most famous of the Chishti Sufis in Delhi were Hazrat Nizamuddin Auliya and Khwaja Nasiruddin Chirag-e-Dehli. They mingled freely with adherents of other faith traditions particularly the Hindus and embraced even people of the lowest classes. For they chose to lead a simple and austere life and conversed with people in their dialect, Hindawi or Hindi.

At the end of this talk on Sufism, the Christian students showed keen interest and asked brainstorming questions on Islam and Sufism in a live question-and-answer session. Striking the conversation, one of them asked the guest speaker to clarify whether Sufis preached their peaceful messages with intent to convert others to their own faith. In his reply, Mr. Dehlvi said, “Sufis were hardly interested in converting followers of other faiths; rather they were actively engaged and keenly interested in conveying their messages without trying to convert the audience. However, later on, many families and groups of Muslim converts attributed their conversion to the ‘good wishes’ or ‘blessings’ of these saints”.

Nevertheless, he regretted that the true spirit of Sufi culture and tradition in the country is now beginning to wean off. It has been reduced to only occasional Shrine visitation, spiritual consultation or observance of particular routine rituals and festivals, he said. “Today's fakirs and pirs seem to have done away with their effort to keep alive the Sufism-inspired mystical culture of pluralism and moderation. Though they still engage in their occupations in the mazars (Sufi shrines), that outnumber even mosques and madrasas in some areas, they have almost lost an impacting legacy that continued to preach peace and moderation down the ages”. “Now their business is merely providing spiritual consultation to the shrine visitors and devotees, who look up to them as their peer-o-murshid (spiritual gurus) and seek consultation in relation to their mundane worldly affairs”, Mr. Dehlvi averred.

Made up of two Sanskrit nouns: vidya (wisdom) and jyoti meaning (light), Vidyajyoti College of Theology (literally, ‘Light of Wisdom), Delhi is a premier institute of theology run by the Jesuits of the South Asian Assistancy. Established in 1879 in Asansol, West Bengal, as Saint Joseph’s seminary, it has been flourishing in the neighbourhood of the University of Delhi as a Christian college globally renowned for its efforts to develop a contextual method of theology. The educational curriculum over here is assigned to a concrete social context and socio-cultural analysis of the Indian situations.

The college closely relates the theological reflections to the questions emerging from the context, thereby equipping the students to develop a nuanced understanding of theology from within the Indian context fostering dialogue with other Indian religions. The motto of Vidyajyoti College reads: “bhantam anubhati” meaning ‘reflecting the One who shines’. It consists of the two central words of a line from the Katha Upanishad, around the 3rd century BCE, tam eva bhantam anubhati sarvam (5.15), that refers to the Ultimate Mystery, of which it is said that “everything reflects the One who alone shines.”