Artistry of Allah in the Spider’s Web

The best-known things about spiders are their webs. However, there are miraculous details hidden both in the web and in the silk they use to build it. The spider web is made up of load-bearing scaffolding threads and spiral capture threads laid over these and coated with a sticky substance, as well as threads binding all the threads together. The capture threads are not completely tied to the scaffolding threads. In this way the more an insect caught in the web struggles, the more it gets stuck to the web. As the capture threads stick all over the insect, they gradually lose their elasticity, both growing stronger and stiffening. In this way the insect is trapped and immobilized. After this the prey, held by the unyielding scaffolding threads, like a wrapped-up, living food parcel, has no alternative but to wait for the spider to come and deal the final blow. 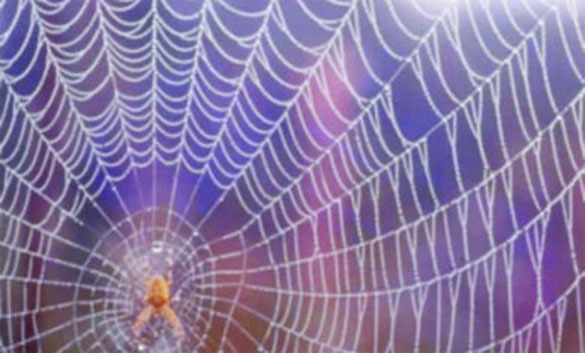 The threads of spider webs, that look smooth under the microscope, are actually far more complex than any artificial fibre. The core of the fibre is covered with mini-threads known as “nanofibrils.” Some of these nanofibrils run along the axis of the fibre in various layers, while others wind around the fibre like a spiral staircase. This arrangement helps large amounts of energy to be absorbed. This property of the web operates to perfection in trapping insects.

Allah has created the system in the spider’s web to be far more complex and immaculate than was understood until recently. Flying insects are covered in pollens and substances that can be transported in the air. Everything that flies through the air has an electrical charge. According to the laws of physics, in order for one substance to adhere to another, they have to be oppositely charged; therefore, there need to be positive and negative charges for an insect to stick to the web because identical poles repel one another. Otherwise the insect would not stick to the web, and could thus easily escape. Yet just at that moment something totally unexpected happens. The web sticks to the insect because there is something about the spider’s web that defies the laws of physics.

The entire spider web’s surface is coated with an electrostatic glue. This glue means that both flying insects and the dust, pollens and similar particles they carry stick to the web. And that is not all. This material distorts the earth’s electrostatic field in a tiny area, smaller than a millimetre in size, on the web. In this way, all objects are capable of adhering to it, irrespective of whether they are positively or negatively charged.

Something else that puzzled scientists for years was how insects failed to detect the spider’s web despite having highly sensitive sensors. Allah has created insects with sensors sufficiently sensitive to detect the slightest electrical change around them. Their antennae work just like e-sensors. The tip of the antenna has a different electric charge to the rest of the insect’s body. In this way, when the insect approaches an electrically charged object the tip of the antenna detects that minute change. Yet despite possessing these sensors, the insect fails to detect the web and becomes caught in it. The reason is that the electrostatic field is distorted in a milli-metric part of the web. Since the insect cannot detect that electrical change it flies into the web and becomes caught.

It is not enough for spider webs to have adhesive properties or to be made from threads with different characteristics in order to be effective traps. For example, the web must also be able to stop flying insects.

l The threads comprising the web are very strong and also very flexible. Yet different parts of the web have different levels of elasticity.

l If the threads were less elastic than required, an insect flying into the web would bounce off, as if it had hit a solid spring.

l If the threads were more elastic, the insect would bend the web, the sticky threads would stick to one another, and the web would become deformed.

l The effect of the wind has also been allowed for in calculating the threads’ elasticity. In that way, a web stretched by the wind can resume its previous form.

l The level of elasticity is also important for the web’s point of attachment. If the web is attached to a plant, for example, the web has to be able to absorb tensions arising due to the movement of the plant.

l The spiral woven capture threads are very close to one another. The slightest swing might cause them to stick together, opening wide gaps in the trapping field at the moment the prey is trapped. For that reason the sticky capture threads, with their high elasticity, are laid over dry threads with low elasticity. This prevents the formation of potential escape holes that might develop in the web.

There is a miraculous nature in every characteristic of the web. Every possibility has been thought of. Reflection on these once again reveals the irrational nature of the claims of the theory of evolution.

He is Allah — the Creator, the Maker, the Giver of Form. To Him belong the Most Beautiful Names. Everything in the heavens and earth glorifies Him. He is the Almighty, the All-Wise. (Surat Al-Hashr, 24)

In contrast to natural or man-made fibbers, the silk produced by spiders can harden or soften, meaning that it can bear different types of load.

Compared with other materials used in web construction, spider silk is 6 times more resistant to falling branches or powerful winds.

When any pressure is placed on a web, only a single strand will break, and instead of having to spin a whole new web the spider renews the web by just repairing one strand.

It takes more energy to rupture a thread produced by a spider than the most highly-developed nylon. One of the main reasons why the spider can make such strong silk is that it manages to control the folding and crystallization of the main protein constituents and add auxiliary compounds. Since the “spinning dope” from which the silk is spun is liquid crystalline, spiders use minimal force at that point. It must not be forgotten that spider silk, which scientists have been researching for many years, has been flawlessly produced by spiders for at least 380 million years.

Harun Yahya has authored more than 300 books translated in 73 languages on politics, religion and science.