A Predicament of the Mainstream: Religious Intolerance Is No Longer the Preserve of Extremist Groups; It Is Endemic Throughout Pakistan

On Sunday, 85 people were killed and more than 100 wounded when two suicide bombers attacked worshipers leaving mass at the All Saints Church in Peshawar, in northwestern Pakistan. The attack was the largest to date against Pakistan’s Christian minority, which comprises less than 2 percent of the population.

Government officials responded with condemnations, calls for public mourning and promise to review security arrangements at churches. But similar rhetoric followed previous attacks against Christians and other minorities, and the violence has persisted.

Religious intolerance is no longer the preserve of extremist groups; it is endemic throughout Pakistan. 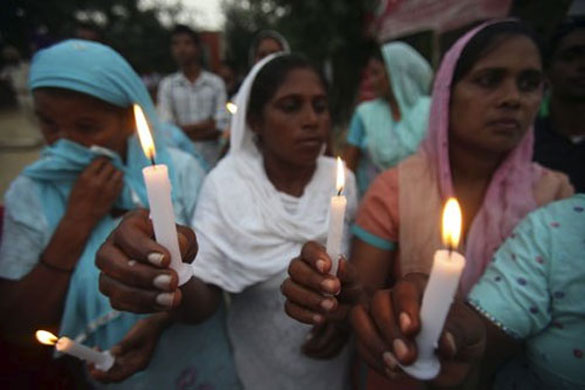 Christians and activists took part in a vigil on Sept. 23 for victims of a bomb blast in All Saints Church in Peshawar, Pakistan. Raminder Pal Singh/European Press photo Agency

Last week, for example, a vast media and social-media campaign was unleashed against a private school in the Punjabi city of Lahore for introducing comparative religion as a subject in the sixth grade. Mubasher Lucman, a popular political talk-show host, aired a segment vilifying the school for doing such a “horrendous thing” to children and accused it (falsely) of replacing compulsory Islamic studies with teachings about Christianity, Judaism, Hinduism and Buddhism.

Enraged parents called in to Lucman’s show to complain that the school was trying to convert young children and “infiltrate” Islam. The backlash spread to Twitter, where people cried out against “moral genocide” and the teaching of “secular trash.”

The school’s principal clarified that the course focused on the history of religions rather than on their beliefs and that the point was to promote “peaceful coexistence.” She was trying to counter the official public-school curriculum, which has long been criticized for containing anti-minority slurs.

Her explanation did little to calm the uproar. Calling the comparative study of religions a “conspiracy,” the Punjabi authorities ordered the seizure of all reading materials related to the course. The province’s education minister also criticized the school for holding its students “hostage to a foreign mind-set” and ordered a review of the syllabuses of all private schools in Punjab.

This reaction was especially troubling coming from the government of Punjab, historically the region of Pakistan where Christians have suffered the worst attacks. In March, the Christian neighborhood of Joseph Colony, in Lahore, was burned to the ground after one of its residents was accused of blaspheming Islam. In 2009, eight Christians were burned alive when a mob attacked their settlement in the central Punjabi village of Gojra.

The Punjabi authorities’ overall response is an indication of the central government’s stance on interfaith harmony. Punjab is headed by Shahbaz Sharif, the brother of Pakistan’s prime minister and a leader of the Pakistan Muslim League-Nawaz (P.M.L.N.) party, which rules the country. The Punjabi government’s ban on teaching comparative religion follows a decision by the central government to merge the National Harmony Ministry with the Religious Affairs Ministry — which amounted to subjugating the first ministry (tasked with defending minority rights) to the second (whose primary job is to arrange Muslim pilgrimages to Saudi Arabia).

Following the attack Sunday on the church in Peshawar, carried out by a faction of the Pakistani Taliban, the P.M.L.N. government has suspended its call for peace talks with the group. But if the government is serious about tackling violence against religious minorities, it will have to acknowledge that intolerance is a predicament of the mainstream, not just the extreme.