On February 16, Professor Pervez Hoodbhoy pointed out in an article, in this newspaper, that some students he was speaking to did not know about Shahbag Square. Coincidentally, when I asked my students the same question a few days ago, I got the same blank looks. The question, of course is, first, why is our media not covering the events in Dhaka, but more importantly, why, even after knowing about the event, we still do not care and don’t want to care. 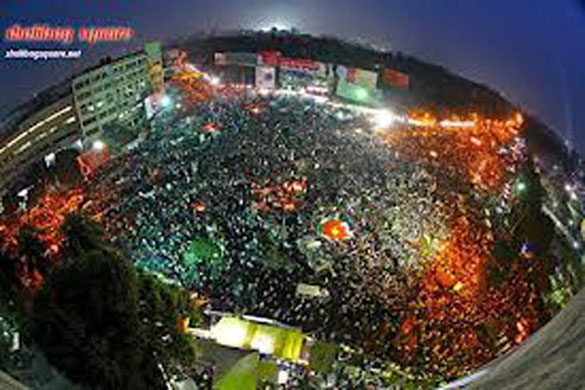 Shahbag Square Will Haunt Us

Our media has grown by leaps and bounds in the last decade or so and is now largely free — rather notoriously. However, with ‘free’ also comes the word ‘fair’ and unless the media acts in both a ‘free and fair’ manner, its freedom is essentially hollow. The events at Shahbag Square and the creation of a tribunal by the Bangladesh government relating to the crimes of 1970-71, are incidents which are directly related to Pakistan and so, deliberately ignoring them is not only unfair, it is unethical. I hope that even now, the torchbearers of the ‘free and fair’ media take cognisance of this absence of coverage and rectify it.

That said, the real problem is that, as a people, Pakistanis are unwilling to deal with the events of 1970-71. It is as if not recognising what happened then and disengagement with the events will make them go away. No, sorry, this won’t happen. History is an important subject not only because it repeats itself or that it has important lessons, it is also important because deliberate disregard and disengagement with historical events adversely affects the national psyche of the country concerned and keeps it hostage to events of the past. Just as we are still hostage to 1947 and its events and still refuse to deal with them, we have not even begun to deal with 1970-71. The result of not engaging with 1947 means that we have a nonsensical approach towards India, cannot tolerate the advancement of Indian Muslims (from what we have been taught, we ‘have’ to call the Muslims who have advanced in India as “not really Muslim”) and within the country, we have perpetuated the intolerant and separatist nature of the demand of Pakistan, clearly seen through the constant attacks on Ahmadis, Shias, Christians and Hindus.

Similarly, refusal to engage with the events of 1970-71 has resulted in us remaining uneasy about our constituent provinces and stops us from being proud of their identity. We feared that Sindh was about to secede only because its people wanted their language to be at par (not replace) with Urdu; we launched a military operation in Balochistan mainly because its people want to run their province themselves; we are uneasy about letting South Punjab and Bahawalpur become a separate province and hopefully develop; we refuse to deal with the upheaval on the Frontier and we do not want to give the people of Gilgit-Baltistan full citizenship rights — most of these are ghosts of past events that we do not want to engage with and hope that they will miraculously disappear by themselves.

Recently, I asked all of my students why they thought they studied the same Pakistan Studies curriculum for over four years in the Pakistani system. After all, since it was mainly a repeat of things year after year, why was it being done? Only a few students figured out that this was done simply because repetition leads one to get irritated and bored by the subject matter and one eventually ends questioning it. That is why, one student noted, all Pakistan Studies answers are the same!

However, if history could be simply whitewashed by a repetition of lies and its repercussions conjured away, I would not have a job and history departments would shut down.

It is high time that the Government of Pakistan officially accept that atrocities were committed against its own people in East Pakistan, agree that it will open its archives to a truthful uncovering of facts, bring the people still alive and accused to justice and publicly declare that we, as a nation, are sorry for what we, yes ‘we’, collectively did in 1970-71.

Hundreds of thousands of Bangladeshis, our former fellow citizens and Muslim brethren, are still in Shahbag Square, waiting to hear our reply.