As Bangabandhu Sheikh Mujibur Rahman rose to speak before the million people gathered at the Race Course in Dhaka on March 7, 1971, something of the electric was in the air. Over the preceding few days, reports and rumours had been making the rounds about an impending declaration of independence by the man whose party, the Awami League, had secured a clear majority of seats (167 out of a total of 313) in Pakistan's national assembly at the general elections of December 1970. What should have been a journey to power as Pakistan's prime minister on Mujib's part had by early March 1971 been transformed into a movement for Pakistan's eastern province to prise itself out of the state created through the division of India in 1947. 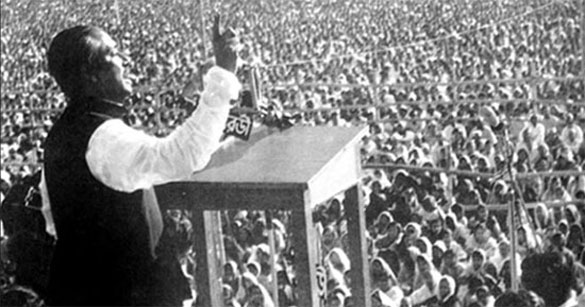 IT was our moment of self-assertion. It was his finest hour.

The speech Bangabandhu delivered at the Race Course served the very crucial purpose of bringing home the truth that Bangladesh was on its way to political freedom. At an intellectual level, the speech was a masterpiece. Within its parameters, Mujib deftly negotiated his way out of a bind, one in which he had found himself since President Yahya Khan had injudiciously deferred the scheduled March 3 meeting of the new national assembly in a broadcast on the first day of the month. Over the next few days, the feeling grew that the Bengali leader was on his way to a declaration of independence. His rejection of an invitation to a round table conference called by General Yahya Khan for March 10 was seen as evidence of his intended action.

And yet those who observed the way Bangabandhu handled the situation in those tumultuous times, knew of the difficulties he had been pushed into. On the one hand, a unilateral declaration of independence would leave him facing the charge of secessionism not only from the Pakistan authorities but also from nations around the world. There were before him the poor instances of Rhodesia's Ian Smith and Biafra's Odumegwu Ojukwu, images he was not enthused by. Besides, any UDI would swiftly invite the retribution of the Pakistan military, at that point steadily reinforcing itself in East Pakistan.

On the other hand, Mujib realised that as undisputed spokesman of the Bengalis he was expected to provide his people with a sense of direction, one that would reassure them about the future. A recurring image is of Bangabandhu taking slow, ponderous steps as he went up to the dais on that March afternoon. It was the picture of a man with the weight of the world on his shoulders.

And then he began to speak.

In that one speech he painted the entire history of why Pakistan had failed as a state. He laid out his arguments in defence of what the Bengali nation needed to do. He mocked the conspiracies then afoot to deprive Bengalis of political power. With prescience, he told his people that even if he were not amongst them, they should move on to protect the land, its history, from those who would trifle with it. Bangabandhu soared, and we with him, as he defined our path to the future. The man who only minutes earlier had seemed wracked by deep worry now offered us a clear path out of the woods and into a very bright blue yonder.

“The struggle this time is the struggle for our emancipation. The struggle this time is for independence,” declaimed Bangabandhu. He had not declared independence, but we were made aware that he had set us on the road to freedom. He had refused to be a secessionist; and he had abjured all ideas of a UDI. He had told us, in precise, unambiguous terms, that liberation was a matter of time. Life for us had changed forever.