Take Any Crime, Add A False Muslim Angle to Show Muslims As Perpetrators; This Is Exactly What Christians Did to Jews In Europe For Centuries

Bela Dih village in Gopalganj district of Bihar and the city of Lincoln in the UK are worlds apart. But something that happened in Gopalganj this month is reminiscent of an incident in Lincoln in 1255, about 765 years ago. 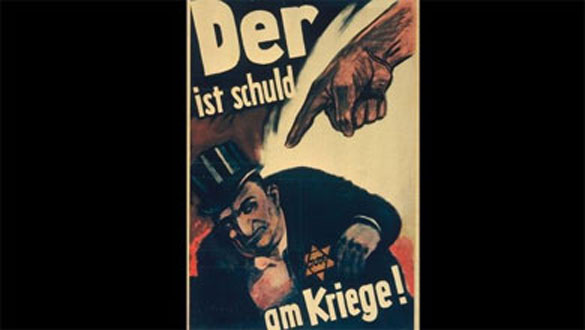 1943 Nazi propaganda poster by Mjölnir: 'He is to blame for the war!' | Commons

Hugh, a nine-year-old boy in Lincoln, disappeared on 31 July 1255. His body was fished out of nearly a month later. The well was owned by a Jew, who was falsely accused of having committed the ritual sacrifice of a Christian boy for religious purposes.

In Bela Dih village of Gopalganj district, a 15-year-old boy named Rohit drowned in a river on 28 March this year. The post-mortem and the FIR clearly said that the cause of death was drowning, and did not mention any injury marks. About 40 days later, a pro-BJP misinformation machine called OpIndia published an article alleging that the boy had been killed in a mosque as ritual sacrifice by Muslims.

This caused enough communal tension in Gopalganj that the head of Bihar Police, the DGP, personally had to go to Bela Dih village. OpIndia also published fictional accounts that the boy’s family had left the village because it “feared” the Muslim neighbours — the family members had left because they were unhappy with the local administration.

Fake news, misinformation and warmongering about the other community have always been around in India. The institution of the Hindu-Muslim riot is often activated with a canard, such as false claims of cow slaughter. In the anti-Sikh pogrom of 1984, for instance, false rumours were circulated that Sikhs had poisoned Delhi’s water tanks. You have to first make your people hate the other community before you attack its members and then use that hate to justify the attack.

But what we see with OpIndia’s Operation Gopalganj is something different. For one, you are no longer restricted to spreading lies just about your own area. Be it Lincoln in 1255 or Delhi in 1984, such rumours had to be created and spread locally. They could then go on to become regional or even national. But today, the internet enables you to sit in Champaran, Patna, Mumbai or New York and spread fake news about a village in Gopalganj, causing communal tension there.

Another thing different from fake news of the past is the power of the visual. By just putting a photo of the grieving family, you can also make people feel for them and have them stand solidly behind you when you attack the community that has been established as ‘responsible’.

The Lincoln incident had a history and a future. It was preceded by years of rumour-mongering about Jews carrying out human sacrifice (of Christians, of course). So this incident became believable: the owner of the well was tortured into confessing. The case became famous, with ballads and nursery rhymes written on it. This is how anti-Semitism went mainstream.

This trick is known as the Jewish or anti-Semitic canard. And there have been many kinds of anti-Semitic canards for centuries. One such was seen during a pandemic. The plague in the 14th-century Europe, better known as the “Black Death”, killed millions of people. A canard was spread that the Black Death was caused by Jews who poisoned wells. This led to the massacre of many Jews.

That’s eerily similar to what we have just seen in India. Fake news that Muslims were spitting and dropping currency notes have been deliberately floated to spread the canard that they are responsible for Covid-19.

A study by the fact-checking website BoomLive on Covid-19-related fake news has found that they were mostly China-related until March, and there was a sudden surge of anti-Muslim fake news with a Covid-19 angle in April. This included some reports put out by mainstream news outlets.

This fake news surge led to incidents of Muslims facing economic boycott and demands to that effect, all of which were amplified by memes and cartoons. In Delhi, a Muslim was beaten up, accused of ‘Corona Jihad’. Instead of being allowed to go to a hospital, he was taken to a Hindu temple and asked to convert forcibly to Hinduism before he could be allowed to go to a hospital, The Guardian reported.

The canard was started with the circulation of an audio clip where Tablighi Jamaat chief Maulana Saad Kandhalvi instructed his followers to not follow social distancing and disobey Covid-19-related prohibitory orders. The Indian Express reported that a forensic examination by Delhi Police found that the audio clip was doctored. Delhi Police denies the claim, but The Indian Express has stood by its story.

Takes Centuries to Prepare A Genocide

Fake news creators first Google some images or videos of Muslims beating up other Muslims in Pakistan or Bangladesh. Then, they are spread on WhatsApp groups and social media with text added to falsely claim that a Muslim had beaten up a Hindu.

The flow of such fake news is consistent and persistent. It serves the purpose of slowly and steadily spreading hate against Muslims, making the Hindu majority see them as violent, scary, unreasonable, and driven by hate.

Seen as individual pieces of fake news, they appear to be just random hate speech. But if you see the scale and regularity of this form of fake news, it is hard to miss the clear long-term strategy here. In 2018, the fact-checking website AltNews put out a long list of examples of fake news where Muslims are accused of crimes they never committed, in order to produce a narrative that Hindus are under siege — “Hindu Khatre Mein Hai”.

Every rape, every murder, every accident is falsely blamed on Muslims, the claim amplified through untraceable WhatsApp images and videos. It’s as if someone reads the crime stories in the newspapers just to add the Muslim angle as a narrative improvisation every day.

In the short run, this helps in shifting attention away from the Narendra Modi government’s failures. So, Covid-19 is spreading, the fake news factories suggest, not because of the Modi government’s delay in testing and arranging personal protective equipment (PPE), but because Muslims are actively spreading it. This also helps in standard Hindu-Muslim polarisation, preventing a BJP voter who may be unhappy with the economic situation or has other grievances from voting for another party.

The Holocaust — the 20th century genocide of European Jews — came after centuries of propaganda against Jews. And the anti-Semitic canard was central to this propaganda. It was also central to Nazi propaganda to turn the Christian masses into silent, willing supporters of the Holocaust.

Don’t Wait For It To Come

Genocide is a big word not to be used lightly. Yet, the similarities between the Jewish canard in Europe and the Muslim canard in today’s India should make us look at the long arc of history. If we don’t stop these fake news factories today, we might be writing a terrible, terrible history of our time.

If you think that’s an exaggeration, think of ShambhulalRegar. In 2017, he brutally hacked and burnt alive a Muslim labourer to death in Rajasthan’s Rajsamand district. A BBC Hindi report found that people in the area were subject to an endless stream of hate videos over WhatsApp, videos showing gory images of calves being slaughtered. According to The Quint’s analysis of hate crime in India, at least 113 people have been killed by Hindu mobs since 2015, when Mohammad Akhlaq in Uttar Pradesh’s Dadri was dragged out of his home and lynched by more than 500 people.

We don’t need to wait for the time when these incidents become a mass phenomenon. If we repeat the mistakes of Europe, one day we will only have guilt and remorse over what we did.

ShivamVij is contributing editor to ThePrint.