The History of Tablighi Jamaat, A Sunni Islamic Missionary Movement, and Its Place Across the World

The world has been gripped by the coronavirus (Covid-19) pandemic with more than a million people having been infected so far. More than 53,000 have died around the world while more than 2,12,000 have recovered. In India, the total number of cases exceeds 2,000 now. The number has doubled in very quick time and the biggest Covid-19 hotspot in the country has been the Tablighi Jamaat Markaz in Nizamuddin, New Delhi where a congregation of thousands of people took place between 1-15 March. 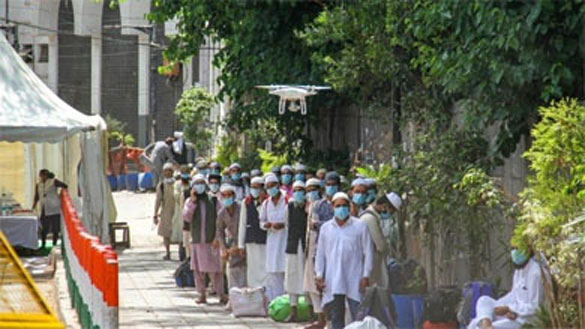 Attendees came from all over India and the world. Authorities jumped to act when 6 people who attended the congregation died in Telangana. So far, more than 9,000 people who either attended the congregation or came in contact with those who did have been quarantined across India. The crisis has also brought focus on the organisation at the centre of it, the Tablighi Jamaat.

What Is Tablighi Jamaat?

The Tablighi Jamaat (Society for Spreading Faith) is a Sunni Islamic missionary movement that urges Muslims to return to a pure form of Sunni Islam and be religiously observant, especially with respect to dressing, personal behaviour, and rituals.

The founder, Muhammad Ilyas al-Kandhlawi, completed his education at a Deoband madrassa, and while working among the people of Mewat, often questioned how Islam could be renewed, outside of education. He decided that only with “physical movement” away from one’s original place, could one leave behind one’s “Esteem for life and its comfort” for the cause of God. In 1927, Tablighi Jamaat was founded.

What Were the Aims of Tablighi Jamaat?

It aimed to recapitulate the practices of Prophet Muhammed, from 7th Century AD, and was concerned with the rise of westernisation and secularisation, and not just the Hindu or Christian inroads into the Muslim community (conversions). In the mid 1920’s Ilyas enjoined upon his followers, the practice of gasht (preaching rounds) and adopting local village councils (Panchayats) — reaching out to Muslims who lived near a mosque and summoning them to study the Quran and pray.

In the introduction to Travellers in Faith, Mohammed Khalid Masud explains that the prohibition of da’wa (to call, or invite people) to non-Muslims was designed to avoid confrontation with Hindu revivalist movements of the time. Tablighi Jamaat avoided politics, and concentrated on religious reform and revival. However, this revivalism referred to the restoration of religious tradition, as established in Sufi orders, and schools of Islamic law. It rejected modernity as manifested in materialism or secularism, and its faith renewal movements were rooted deeply in local environments.

What Did It Evolve into And How Was It Viewed?

By the mid-1930s, Tablighi Jamaat had a programme of belief, which included, beyond the five pillars of Islam, and Islamic doctrinal staples, the following: Islamic education, modest Islamic dress and appearance (shaving the moustache, and allowing the beard to grow long), rejection of other religions, high regard for Muslims, propagating Islam, self-financing of Tabligh trips, lawful means of earning a living, and strict avoidance of divisive and sectarian issues. (Source: Travellers in Faith: Studies of the Tablighi Jama‘at as a Transnational Islamic Movement for Faith Renewal)

Tablighi Jamaat’s disinterest in politics or power is what enabled it to gain followers in post-independence India, and eventually across the world, while functioning without any state control. Its benign nature ensured that it was not banned in India like other Islamist or religious organisations, and its center continues in Nizamuddin, in the heart of New Delhi.

A contrary view is that Tablighi Jamaat being ‘apolitical’, (but with followers preaching and espousing a religious way of life) is indeed its political stance. A piece in livemint, states that while Tablighi Jamaat does not preach anything not already taught in Islam, it prefers to be selective, in terms of which parts of the religion it focuses on. The piece cites Mushirul Hasan, former Vice Chancellor of Jamia Millia Islamia, who says that Tablighi Jamaat's claim that it is apolitical is “very convenient.” According to him “no movement is apolitical; every movement has an objective.” Some of the suspicion against the Tablighi Jamaat also arises from the source of its funds, as no one knows how much and from where the money comes in, though members say people donate whatever they want, and the money is used in the Markaz.

Tablighi Jamaat is often considered extremely orthodox in its interpretations, with the ability to convert Muslims into radical believers. However, personalising religion, making it an individual’s path, and following a distinction between Deen and Duniya (religion and politics), Tablighi Jamaat has allowed its followers to come to terms with a secular state. Without a central political power, individuals and their relationship with religion is the primary target of reform.

What Have Been Some Criticisms Surrounding It?

Yoginder Sikand, author of Origins and Development of the Tablighi Jama’t, cites in an essay that even within the Muslim world, Tablighi Jamaat has received severe criticism. Arshad ul-qadri, an Indian Barelvi ideologue alleged that it was set up by colonial rulers of India to create dissension among Muslims, to blunt their spirit of jihad. The other criticisms has been that in insisting on the separation of religion from politics — defect secularism — Tablighi Jamaat is a dream of enemies of Islam who dread the prospect of Muslims acquiring political power. Further, it teaches jihad as personal purification (jihad al-Nafs — a war with an individual’s own desires) rather than holy war, and has been disapproved by clerics in Saudi Arabia, where it is officially banned.

What Has Tablighi Jamaat Meant Across the World?

According to Pew Research Centre, the group’s missionary activities and loose organisational structure can be exploited by radical elements. In many countries, including India, radicals and terrorists have been associated with it. A piece in livemint, cites Ajit Doval as saying that, “There is a culture of secretism in the organisation, which develops suspicion.” But he goes on to assert that the movement was “never viewed adversely by the government.” However, there are important complexities that need to be understood, beyond the organisation as simply being black or white. The piece cites counter terrorism expert Ajai Sahni, who says, “It has been accepted by India as a religious proselytising organisation with no direct contribution to terror, but what has been found is that some people who were part of it have ended up in radicalisation formations. It is an international organisation with intimate links to the Pakistan Tablighi Jamaat. People are brought in from Pakistan as proselytisers which creates a potential for suspicion. This puts into question the general orientation of the organisation. Deep immersion in any religion, not just Islam, can lead to radicalisation.”

Original: The history of the Tablighi Jamaat and its place in the Islamic world