Iraq: How Did We Get Here?

Eleven years after the U.S. invasion, Iraq remains steeped in violence, with militant extremists gaining ground, civil war hanging in the balance and no clear resolution to the chaos.

What went wrong? How did we get here? From “shock and awe” to the rise of ISIS, we’ve traced the pivotal political moments of the Iraq war and its aftermath in the timeline below.

The pace of the U.S. invasion was staggering. Within weeks, the Iraqi Army had crumbled, President Saddam Hussein had fled, and American troops patrolled Baghdad.

Then came the hard part: figuring out how to secure and govern a complex nation of more than 30 million people, about whom top U.S. officials quickly realized they knew very little.

But at least one American official had issued a warning. In 2002, Ambassador Ryan Crocker had drawn up a still-classified memo, later dubbed the “Perfect Storm.” It detailed the potentially disastrous consequences of an invasion in Iraq.

In May 2003, President Bush appointed L. Paul Bremer, a career diplomat with little experience in the Middle East, as the head of the Coalition Provisional Authority in Iraq.

Within days of his arrival in Baghdad, Bremer issued two controversial orders: to disband the Iraqi National Army, and to remove those with membership in Hussein’s Ba’ath Party from professional positions.

Advisers were concerned that the orders would alienate skilled Sunnis who were willing to participate in the new government. Lt. Gen. Jay Garner, who briefly led the reconstruction effort after the invasion, told FRONTLINE that he and the former CIA station chief in Baghdad warned Bremer specifically that the de-Ba’thification order would oust 30,000 to 50,000 capable Sunni professionals from the government, leaving them disenfranchised, angry and as potential recruits for the nascent insurgency.

… And The Insurgency Erupts

Within 72 hours of Bremer’s order to disband the military, the first major attack on the airport road took place. By August, two major bombings in Baghdad — at the Jordanian embassy and the United Nations headquarters — signalled that the insurgency was in full force. 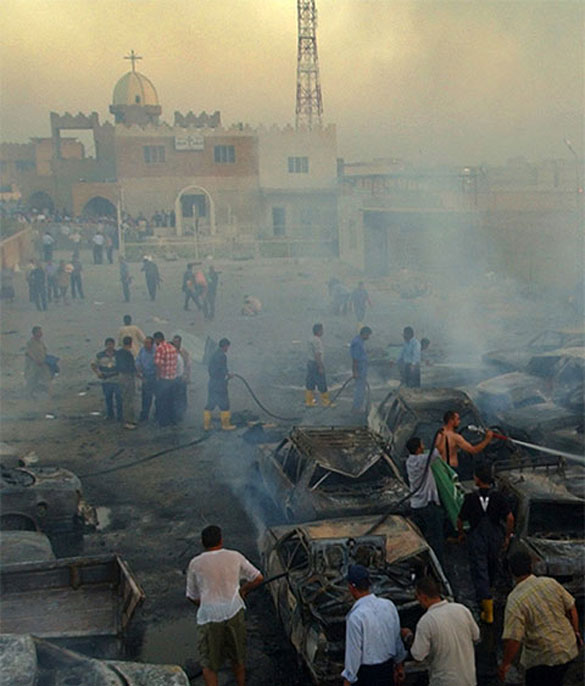 The aftermath of an August 2004 blast in southern Baghdad. (AP Photo/Khalid Mohammed)

Leaving Iraq to the Iraqis

By the summer of 2003, the White House had a new plan: Get out. The military retreated inside large, fortified bases. Politically, officials focused on an exit strategy: establish a constitution, set up a governing council, and let Iraqis govern Iraq.

On June 28, 2004, Bremer handed over authority to the interim Iraqi Governing Council. But his departure was hardly triumphant: The move came two days ahead of schedule because of fears of an attack. 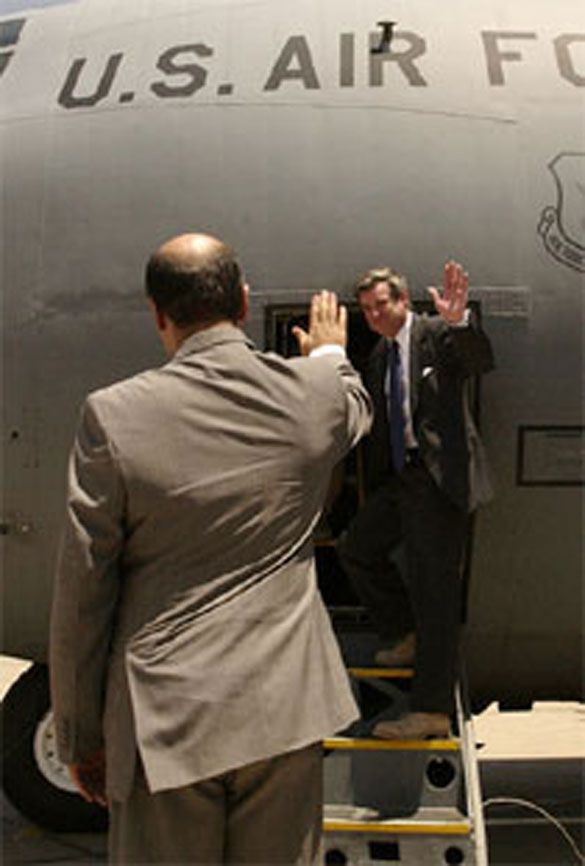 Until Feb. 22, 2006, Iraq’s Shia majority had largely borne with patience the string of attacks by Sunni insurgents. But Al Qaeda in Iraq, eager to provoke a sectarian war, pushed them over the edge when it destroyed the Al-Askari Mosque in Samarra, one of Shia Islam’s holiest sites.

Over the next 10 days, Shia militias took their revenge, massacring Sunnis. In Baghdad, their death squads moved house to house, killing as they went.

President Bush determined the U.S. needed a new strategy to quell the bloodshed. That included a new partner in the Iraqi leadership — someone who could rally the Shia but also not be perceived as too sectarian by the Sunnis and Kurds.

Nouri al-Maliki, a minor figure in the Iraqi parliament, emerged as a potential favourite among U.S. officials, despite his lack of experience.

The U.S. also needed a new approach on the ground. This time, it was a last-ditch effort to salvage the American incursion in Iraq.

Bush brought in Gen. David Petraeus to lead what became known as the surge — an additional 30,000 U.S. troops who moved off the large, fortified bases and into the neighbourhoods.

U.S. forces sustained their heaviest losses during this period. But in August, they caught a break: Muqtada al-Sadr, the head of a powerful Shia militia, called for a ceasefire and stopped attacking coalition forces. The move created a lull in the violence that allowed U.S. forces to focus on the Sunni insurgency.

…And Sunnis Join the Fight

At the same time, Petraeus, a counterinsurgency expert, also reached out to Sunni tribes who had backed the insurgency, but had also begun to turn against Al Qaeda fighters in their community. The general’s goal: convince them to stop attacking American troops and focus only on battling Al Qaeda. The means: cash.

The U.S. would ultimately pay out about $400 million to the 103,000 Sunnis who became known as the “Sons of Iraq,” or the “Awakening.” But Maliki, a Shia, was wary of engaging with the Sunni tribes. Petraeus persuaded the prime minister to support the effort. 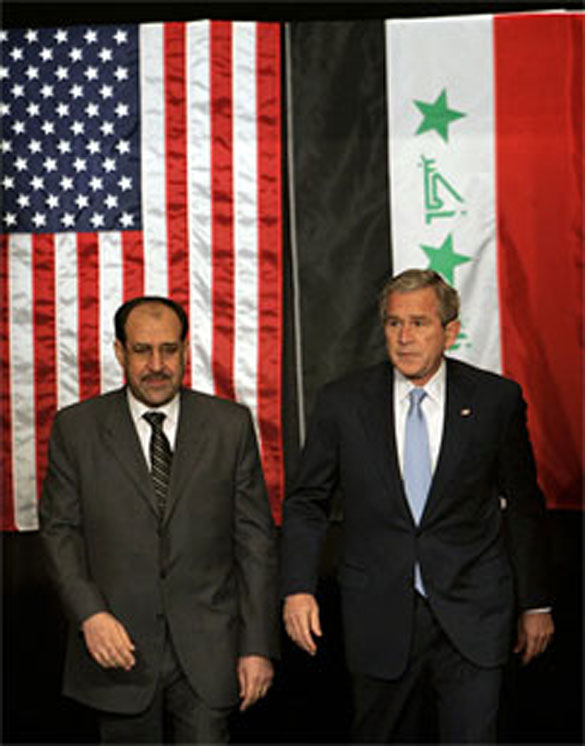 The confluence of those three factors — the surge, the “Awakening,” and Sadr’s ceasefire — reduced the violence in Iraq to a low-grade insurgency. Hoping to maintain that progress, President Bush signed an agreement with Maliki before he left office that would ensure American troops remained in Iraq through 2011. 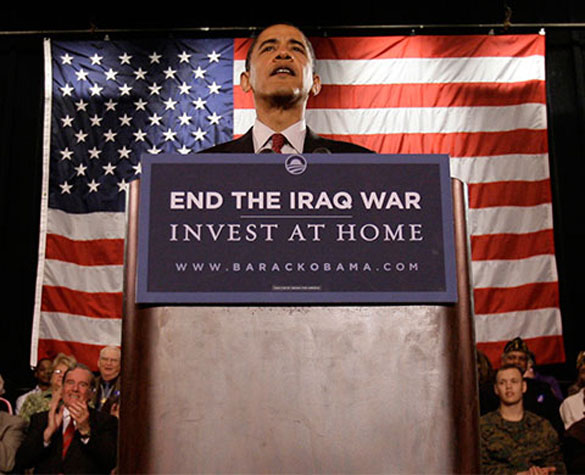 As he campaigned for the presidency, Barack Obama promised war-weary Americans that he would withdraw U.S. forces from Iraq. Within his first month in office, the new president set a pullout date: December 2011.

With the advice of the Pentagon and others, the president considered keeping a small troop presence in the country. But the U.S. and Iraqi governments were unable to reach an agreement on the size or the legal guidelines under which they’d remain. By December 2011, almost all U.S. forces had left Iraq. The U.S. diplomatic effort was also scaled back, leaving Maliki to govern on his own.

…And the Purge Begins

The day after the American troops left, Maliki issued an arrest warrant for the Sunni vice president, Tariq al-Hashimi, forcing him to flee the country. Maliki would go on to push other prominent Sunnis from political office and the military, and ultimately stopped payments to the Sons of Iraq.

The message was clear: there would be no role for Sunnis in Maliki’s Shia regime. For many, their only recourse would be to join the fight against it. 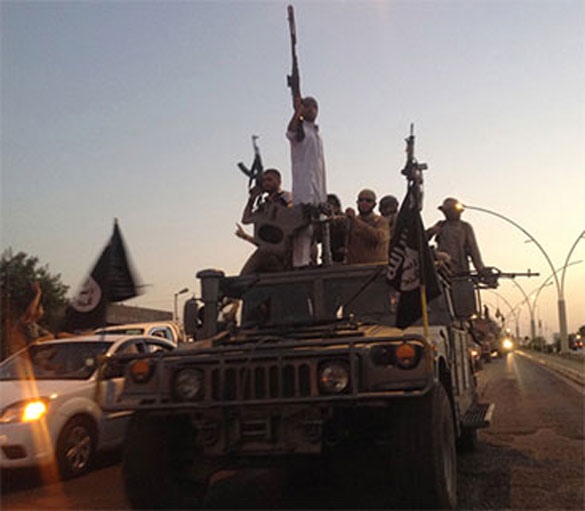 A sign of what was to come: fighters parade a commandeered Iraqi military truck through Mosul. (AP Photo)

The Rise of ISIS

Disenfranchised Sunnis found an outlet in a militant group that had recently coalesced in the fight against President Bashar al-Assad in Syria. ISIS, which had a reputation for ruthlessness, gained a rapid foothold in Iraq, capturing the towns of Fallujah and Ramadi in January, and Iraq’s second-largest city, Mosul, in June.

The world was surprised by how quickly the Iraqi army fell to a small force of fighters. Shia militias have stepped in to fill the void, and sectarian killings are on the rise again.