Enforced Ghettoisation: ‘Borders’ Have Been Demarcated In The Minds Of Hindus And Muslims

If there was an image that encapsulated the enduring aspects of the week-long communal violence that devastated northeast Delhi, it was the ‘gulel’. A catapult was allegedly placed on the rooftop of a three-storeyed building, housing a school at Shiv Vihar, one of the deeply impacted areas, and used to shoot stones and bricks and fire Molotov cocktail on another school that stood cheek by jowl. One school was owned by a Muslim and the other by a Hindu. The propeller was showcased by the patrolling police as a manifestation of the ‘ingenuity’ and ‘planning’ that went into the violence to visiting journalists who were asked to videograph it, as the cops sheepishly ducked questions on why the local intelligence was oblivious to the preparations. The catapult figuratively travelled all over northeast Delhi and embedded itself in people’s consciousness to become a leitmotif. Every other building was supposed to have had a projectile to launch attacks, although the topography belied the fanciful theory. 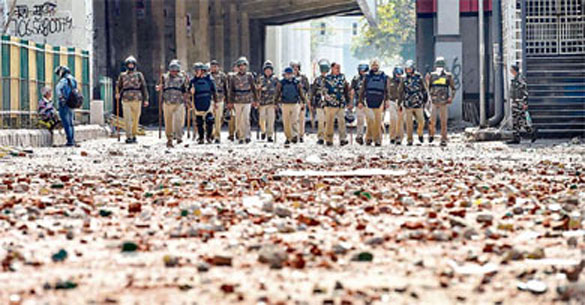 The physical targets made it plain as to which community was targeted and why the targets were chosen: to humiliate Muslims who were on the receiving end since 2014, first through isolated lynching by cattle vigilantes that fostered a narrative underpinned on the belief that you either live on the ‘terms’ set by the Hindus (no consuming beef and meat in general) or perish. The collective brutalities followed, UP being the standout state before Delhi caught up. Several masjid, Mazar and madrasa were set upon by mobs and burnt down. Then, the mobs went for shops, a major source of livelihood for Muslims who realised that entrepreneurship was their only viable route to a better life. An entire market, vending tyres and auto parts, was set aflame. The economic spine was broken. Finally, came the homes that were zeroed in on that in certain settlements, rows and rows of Hindu houses went untouched while those of the Muslims were looted and razed. Forced into stray relief camps or the homes of relatives and good Samaritans who offered temporary shelter, the dispossessed and the dishoused said they had no hope of returning to their homes, even if they were reconstructed, but would rather relocate to where the community was in a majority.

Not that the areas that make up northeast Delhi are habitable even in a basic sense, except for those who early on acquired large tracts of land and raised decent homes. But these are few and far between. For the majority, Hindus and Muslims, it means surviving in a semi-urban sprawl that was the recipient of a miniscule number of big city amenities and the object of wilful neglect, visible in the open, clogged drains, narrow roads and unclaimed garbage. The four major drains, intersecting the habitations that have become hotspots (Shiv Vihar, Chand Bagh, Babarpur, Gokalpuri etc), flow from the Eastern Yamuna Canal in Ghaziabad and served as convenient dumps for the corpses that are daily surfacing. The final death count is incalculable.

The political undertones were two. The RSS and the BJP have a significant presence in northeast Delhi that has spawned the growth of the affiliates like the Bajrang Dal. Lok Sabha MP Manoj Tiwari is from the BJP. Of the 10 Assembly constituencies here, the BJP picked up three amidst a pro-AAP wave: Rohtas Nagar, Karawal Nagar and Ghonda. The last two saw heavy violence.

BJP’s supporters made it apparent that they did not take kindly to AAP’s victory which, they alleged, was accelerated with ‘100 per cent’ Muslim votes. However, AAP stickers were also spotted on the doors of Hindu shops and homes, suggesting that the contest was not one-sided, as the BJP propagated. By the admission of some BJP backers, with a 70 (Hindu):30 (Muslim) demographic ratio, it was ‘irrational’ for the AAP to win seven seats, with just the backing of the minorities. The RSS-BJP votaries’ ire was fixed on two entities: Mustafabad MLA Haji Yunus, who was singled out as the ‘linchpin’ of the attacks on Hindus, and AAP councillor Tahir Hussain, who was implicated in the murder of an IB official and since suspended by the party. Yunus, they claimed, had organised celebrations to fete the AAP’s victory with ‘incendiary’ slogans, although the claim was not endorsed by the unaligned Hindus. However, one thread in a larger theme coalesced with another. An offshoot of the Muslim-AAP association was the charge that the minorities started the violence to embarrass the Modi government during US President Donald Trump’s visit. The trigger for the attacks, however, differed from area to area.

The second subtext was the protests against the CAA that were also held in northeast Delhi in controversial circumstances. The spur was moving the Jafrabad sit-in to outside a Metro station. The movement was handy to feed the charge that the protests inconvenienced civilians and ought to be dismantled. Added to that was the Bhim Army’s call for a Bharat Bandh on February 27 that was allegedly backed by Muslims. The spectre of a Muslim-Dalit alliance, created by the Bhim Army’s support for the anti-CAA campaign, unnerved the BJP that counted Dalit sub-castes such as the Valmiki and Khatik in its large base.

Expectedly, stories of Hindus and Muslims saving one another from marauders intersperse a grim narrative, but the reality is that the violence has not only scarred hearts and minds, but polarised the gut reaction. Earlier, there were no physical barriers between the pockets occupied by the Hindus and Muslims. Overnight, as it were, the ‘borders’ have been demarcated, with Hindus mapping out alternative routes to reach Metro stations and their workplaces, and Muslims ruling out the option of returning to their homes in the mixed areas. With the non-BJP parties retreating from articulating a position on the violence, is there a lining on the horizon?