Minura Begum has been in labour for almost 24 hours, and the baby is stuck. Worse, it’s turned around, one tiny foot already emerging into the world in a difficult breech delivery that threatens the lives of mother and child alike.

Twenty-three years old and delivering her first child, Minura desperately needs a doctor. But the Myanmar government has confined her, along with 150,000 others, to a quasi-concentration camp outside town here, and it blocks aid workers from entering to provide medical help. She’s on her own. 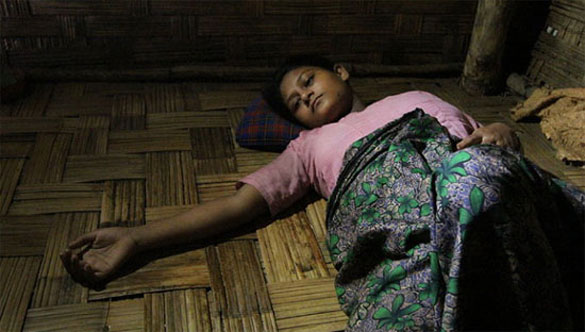 Welcome to Myanmar, where tremendous democratic progress is being swamped by crimes against humanity toward the Rohingya, a much-resented Muslim minority in this Buddhist country. Budding democracy seems to aggravate the persecution, for ethnic cleansing of an unpopular minority appears to be a popular vote-getting strategy.

This is my annual “win-a-trip” journey, in which I take a university student on a reporting trip to the developing world. I’m with this year’s winner, Nicole Sganga of Notre Dame University, spotlighting an injustice that some call a genocide.

There are more than one million Rohingya in Rakhine State in the northwest of Myanmar. They are distinct from the local Buddhists both by darker skin and by their Islamic faith. For decades, Myanmar’s military rulers have tried systematically to erase the Rohingya’s existence with oppression, periodic mass expulsions and denials of their identity.

“There are no people called Rohingya in Myanmar,” U Win Myaing, a spokesman for Rakhine State, told me. He said that most are simply illegal immigrants from Bangladesh.

This narrative is absurd, as well as racist. A document as far back as 1799refers to the Rohingya population here, and an 1826 report estimates that 30 percent of the population of this region was Muslim.

Since clashes in 2012 claimed more than 200 lives — including children hacked with machetes — the authorities have confined Rohingya to internment camps or their own villages. They are stripped of citizenship and cannot freely go to the market, to schools, to university, to hospitals.

Tens of thousands have made desperate attempts to flee by boat, with many drowning along the way.

This year, the Myanmar authorities have cracked down even harder, making the situation worse. First, the government expelled Doctors Without Borders, which had been providing health care for the Rohingya. Then orchestrated mobs attacked the offices of humanitarian organizations, forcing them out.

Some kinds of aid are resuming, but not health care. That’s a sterile way of putting it. I wish readers could see the terrified eyes of Shamshida Begum, 22, a mom whose 1-year-old daughter, Noor, burned with fever.

Shamshida said that at home the thermometer had registered 107 degrees. Even after damp cloths had been placed on Noor to lower her temperature, the thermometer, when I saw it, still read 105 degrees. What kind of a government denies humanitarians from providing medical care to a toddler?

Noor survived, but some don’t. We visited the grief-stricken family of a 35-year-old man named Ba Sein, who died after his tuberculosis went untreated.

“He died because he couldn’t get medicine,” said his widow, Habiba, as friends made a bamboo coffin outside. Now she worries about her four small children who, like other children in the camp, haven’t been vaccinated. The camp is an epidemic waiting to happen.

Minura, the woman with a breech delivery, survived a 28-hour labour and haemorrhaging, but lost her baby. The infant girl was buried in an unmarked grave — one of a large number of achingly small graves on the outskirts of the camp.

“Because I am Rohingya, I cannot get health care and I cannot be a father,” Minura’s husband, Zakir Ahmed, a mason, said bitterly after the burial.

The United States has spoken up, but far too mildly; Europe and Asia have tried to look the other way. We should work in particular with Japan, Britain, Malaysia and the United Nations to pressure Myanmar to restore humanitarian access and medical care.

President Obama, who visited Myanmar and is much admired here, should flatly declare that what is happening here is unconscionable. Obama has lately noted that his foreign policy options are limited, and that military interventions often backfire. True enough, but in Myanmar he has political capital that he has not fully used.

As a university student, Obama denounced apartheid in South Africa. As president, he should stand up to an even more appalling apartheid — one in Myanmar that deprives members of one ethnic group even of health care.

Myanmar seeks American investment and approval. We must make clear that it will get neither unless it treats Rohingya as human beings.