Maulana Tauqeer Raza Khan Barailwi has supported the law on Triple Talaq criminalising instant divorce as Shariah-compliant as the Islamic State of Iraq and Syria (ISIS) had also done this in its Book of Law as per articles in its mouthpiece magazines like Dabiq and Rumayyia.

The Indian Urdu press mostly controlled by the Islamic clerics is known for a very constrained space for the dissenting views on the Muslim personal law affairs. A review of the country’s Urdu dailies on the ongoing debate on ‘Triple Talaq Bill’ passed by the Rajya Sabha makes it self-explanatory. But this time, most of the Urdu press releases on this issue have put together assertions that cannot be simply dismissed.

Talking to the newspaper, Maulana Syed Ashraf Kichchawchchvi, founder and president of All India Ulema & Mashaikh Board, an apex body of Sunni-Sufi Muslims in India, questioned as to how the Triple Talaq Bill, which abolishes the practice of triple Talaq but also criminalises the husband at the same time, would help in the family’s domestic life. He asked: “When the Supreme Court has already struck down the practice, then what does the government intend by bringing a law to imprison and punish the Muslim husbands?”Kichchawchchvi further asks as to who will provide the allowance to the wife and her children as long as the husband is imprisoned and how can this law ensure that the malpractice will not happen? What is the guarantee of the couple living happily even after the husband is put behind the bars for three years? And not only the imprisonment, in many cases, he will have to suffer the harassments and custodial persecutions on the complaints from the wife and her relatives. “We do not reject the Triple Talaq Bill outright. But we demand a fair probe into the related issues and more nuances need to be studied to introduce a proper and more practical law on against the instant divorce. Otherwise, the law itself will appear ‘instantly framed’ and hastily decided just like the practice of the instant divorce (triple Talaq)”, he said. 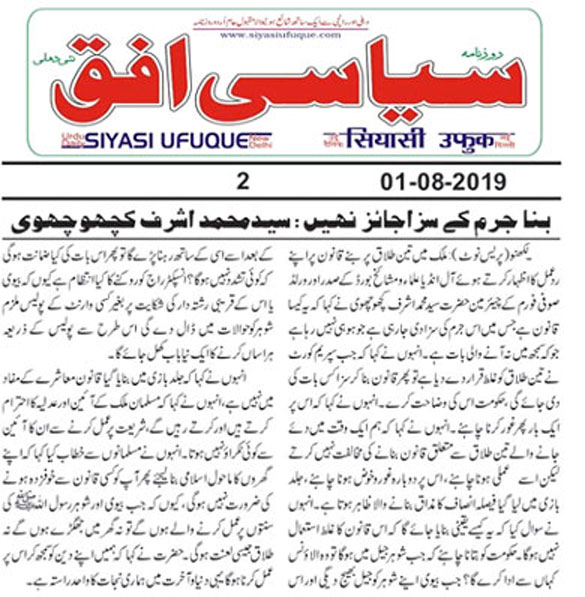 Roznama Sahafat, another Urdu daily from Delhi published a report on why Muslims in India as well as the clerics are averse to the Bill. It quotes several ulema and community leaders who have called the Bill antithetical to the spirit of Indian Constitution. Mufti Abul Qasim No’mani, rector of the Darul Uloom Deoband has been quoted as saying: “The Triple Talaq Bill passed by the Rajya Sabha is not only a clear interference into the Islamic Shari’ah but also goes against the women’s rights. This law violates the religious freedom enshrined in the Indian constitution and has been brought, only on the strength of majority, at a time when thousands of women have showed their dissatisfaction against the law through the signature campaigns”.

In his criticism of the Bill Maulana Hasan al-Hashmi, founder of the A’alami RoohaniTehrik, has gone one step further. He says that despite the demographic majority of the Hindus in India, ulema declare the country as Darul Amn (land of peace). But the ongoing situation of interference in the Shariah-related affairs reeks of attempts to catapult it into “Darul Harb” (land of war)”, as reported in the fifth page of the daily Sahafat on the 1st August.

As usual, the Urdu newspapers did not offer the space to dissent or divergent Muslim views on the issue of the Muslim Personal Laws. They have not published, so far, anything critical of the misplaced patriarchy, mullahs’ male chauvinism or violation of Muslim women's rights in the name of vile customs like the Halala. The vile practice of Halala is a direct result of the instant divorce being pronounced, without due deliberation that Islam asks Muslim husbands to engage in before making such an important decision. Thus, the editorial policies in almost all Urdu newspapers appear to be clergy-controlled.

Notably, an editorial in the reputed Urdu daily, Inqilab which has editions across the country, states that if the government intends to provide equal rights to Muslim women, it should first remove the religious stipulation from the Section 341 in the Constitution. “The religious terms in Section 341 hampers the Muslim community from availing the opportunities of progression open to other backward communities and classes like the Dalits," it said.

A sense of unanimity has prevailed in the Urdu press in support of the Muslim personal laws and for not allowing any interference in the Shariah law by the government. But at the same time, a note of introspection can also be seen in a section of the Urdu newspapers which confess that if the ulema had made the community abreast of the true Qur’anic principles of marriage and divorce, it would not have been an issue in India. However, in a brazen breach of the journalistic ethics, none of the leading Urdu newspapers has covered a progressive view on the Uniform Civil Code.

While the arguments against the Triple Talaq Bill are not wholly untenable and need not be rejected outright, there is a distressing development in the wake of the Bill passed in the Rajya Sabha and more so now after the Bill became an Act after the presidential assent. Now a man can be booked under new law for divorcing wife in one go (Talaq-e-Bid’at), even though the divorce will not be considered effective and irrevocable.

But on the other hand, and more regrettably, the self-declared custodians of Islam in India like the All India Muslim Personal Law Board (AIMPLB), Darul Uloom Deoband, Jamiat Ulema-e-Hind and Jama’t-e-Islami are warning that India may turn into Darul Harb (land of war) owing to the ‘forced changes’ in the Islamic Shariah. Such a declaration would make it mandatory for a Muslim to either migrate to other lands or fight against the state of India. Nothing could be more irresponsible than this. Even a mention of Darul Harb in the context of present-day secular, democratic India and in the present volatile situation is extremely dangerous. In its March 2009 fatwa issued after Bombay blasts Darul Uloom Deoband had said: “In Darul Harb territory, jihad is legitimate.” The fatwa added that “India had ceased to be a Darul Harb with the end of colonial rule.” Now if it is again declared Darul Harb, will ulema be making Jihad in India legitimate?

The Indian Islamic perspective on the country’s jurisprudential status has always remained pro-democracy, peaceful and pluralistic. The mainstream ulema, mostly from Deoband, declared the independent India as Darul Mu’ahida (land of peace agreement), while some others termed it Darul Amn (land of peace) and a few modern Islamic scholars like Maulana Wahiduddin Khan and Maulana Manzarul Islam Azhari introduced India as Darul Da’wah (abode of Islamic preaching). They all have maintained pro-state positions on issues like Pakistan’s involvement in Kashmir militancy.

One would have a hard time finding an A’alim/Fazil (Islamic theologian) in India who will not stand by the Indian establishment on issues like the anti-British jihad or now the anti-Pakistan surgical strikes. Even recently, ulema belonging to both Deobandi and Barelvi Islamic schools staunchly supported the surgical strikes of the Indian army in the wake of Pulwama terror attack. Maulana Shahabudin Razvi of All India Jamaat Raza-e-Mustafa, the Bareilly Qazi Maulana Asjad Raza Khan and the Deoband spokesperson Maulana Ashraf Usmani, all had openly supported the Indian army’s action. But an imprudent decision and hastily designed ‘reform’ like in the Triple Talaq Bill which stands untenable in several ulema’s views, as it abolishes the practice of triple talaq and criminalises the husband at the same, does not augur well in the long run.

Though there is no official declaration for India turning into ‘Darul Harb’, the theological grounds on which this declaration can be issued— interference in Muslims’ religious and domestic matters—have been pronounced by the Deoband clerics including Mufti Abul Qasim No’mani, rector of Darul Uloom Deoband and Maulana Mahmood Madani General Secretary Jamiat Ulama-e-Hind. The Urdu daily Sahafat carried a report on 1st August titled, “The Triple Talaq Bill is an interference in the Shari’ah-based Muslim personal laws”. It quotes Maulana Mahmood Madani as saying: “this bill will result into grave injustice against women and their permanent and irrevocable divorce which will also deter their remarriage. The imprisonment of the husbands will tell upon the wife, children and other dependent family members”. Madani accuses the Modi government of a wilful oblivion to the recommendations made by the community representatives. “We had clearly alarmed the government about the flaws and ill consequences of the Bill”, Madani claims in this report. He further says that ‘the government by brining such law is indirectly trying to impose Common Civil Court which aims at depriving Muslims of their religious freedom instead of doing justice towards women’. 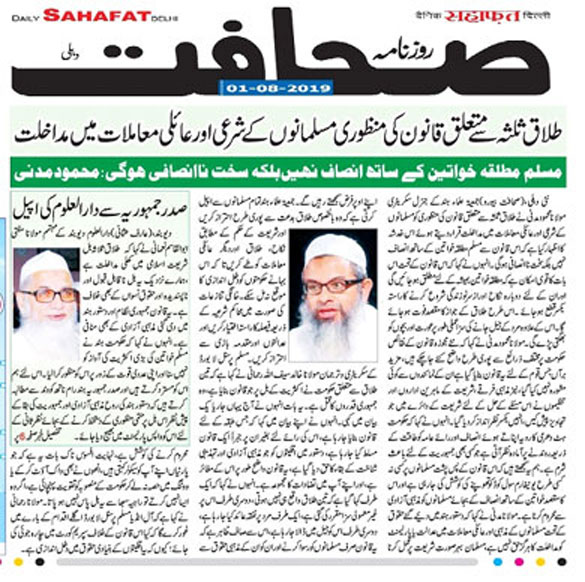 But surprisingly, noted Barelwi leader in North India—Maulana Tauqeer Raza Khan, National President of Ittihad-e-Millat Council expressed quite a divergent opinion. He welcomed the Triple Talaq Bill as consistent and compatible with the Islamic Sha’riah. “The bill having been passed in the Rajya Sabha is actually the win of the Islamic Shari’ah as the instant divorce was against the will of Allah and His Prophet (pbuh) and whatever displeases the Prophet (pbuh) cannot be acceptable to Muslims at all”, he said. Maulana Tauqeer Raza further states that “those who did not adhere to the Ulema in this matter, will have to follow the Islamic rulings now under the pressure from the government”. 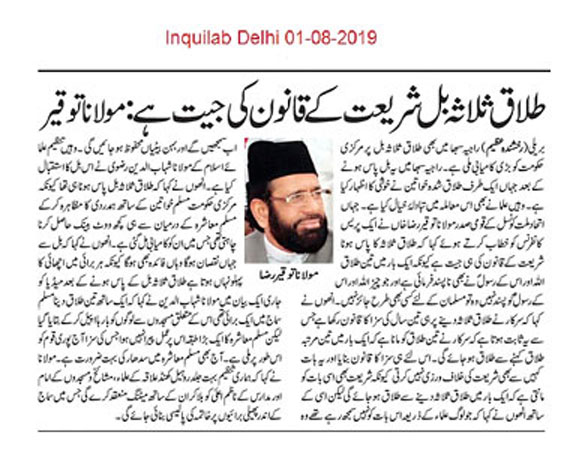 Indeed, the Barelwi leader Maulana Tauqeer Raza Khan who is known for his announcement of a bounty of Rs 5 lakh on Tasleema Nasirn’s head in 2007 for her ‘blasphemy’ against Islam, is right in his assertion that the government’s Bill on Triple Talaq is Shariah-compliant. In fact, Islamic State of Iraq and Syria (ISIS) had made a very similar clause in its Book of Law published by the Islamic State (ISIS) as per articles in its suspended magazines of ISIS like Dabiq and Rumayyia. It had ruled that whosoever utters the ‘un-Islamic’ instant divorce will be considered a criminal and punished in the same way as the second Caliph Umar al-Farooq (r.a) flogged men when they resorted to instant Talaq. This leaves us with the quandary whether India has also resorted to the same law on Triple Talaq as desired by the ISIS in its occupied lands?

The Sunni-Shafa’ee leader in South India Shaikh Aboobacker Musliyar, recently appointed as the Grand Mufti in India, reacted to the absence of Indian Union Muslim League (IUML) MP Abdul Wahad during the debate on the Triple Talaq Bill in the Rajya Sabha. “MPs of opposition parties should act responsibly……The principal duty of an opposition party in this discussion was to question the Bill used for weakening the values of democracy”, he contended.