Suu Kyi Appeals To Rohingyas To Join The Spring Revolution

2. Her government promises to make Tatmadaw accountable for the genocide of Rohingyas

3. Majority Burmese people apologise to Rohingyas for supporting their persecution out of ignorance and misinformation

In a bid to gain international support and recognition to her government-in-exile, the National Unity Government (in exile) of Aung San Suu Kyi has recently released a policy document on Rohingya in which it has promised citizenship to Rohingya Muslims of Myanmar and the repatriation of Rohingya refugees from Bangladesh. In return, it has sought their support in her fight against Tatmadaw ( Myanmar military). The NUG government has promised to abolish or amend the 1982 Citizenship Laws brought by the military which excludes Rohingyas as citizens.

"The Rohingyas are entitled to citizenship by laws that will accord with fundamental human rights and democratic federal principles."

"We invite the Rohingyas to join hands with us and with others to participate in this Spring Revolution against the military dictatorship in all possible ways."

The dramatic change of events in Myanmar's politics holds a lot of hope for Rohingya refugees who have been suffering all the hardships for the last four years. The military coup in February that toppled Aung San Suu Kyi's democratically elected government has not only changed the power equations but also the outlook of the majority Barmar community towards the Rohingya minority community. The brutal crackdown by Tatmadaw ( military) on the peaceful protesters killing more than 700 Burmese people has made them realise how much the Rohingya might have suffered at the hands of the military when they dont spare the majority community.

Since the month of March, Rohingya activists had hoped that the coup, the protests and subsequent crackdown will bring some political change in their favour. The majority Barmar community and other ethnic communities have begun to realise that Rohingyas were wrongfully persecuted by the military. The crackdown has united the entire Myanmarese society. Now the common people consider the army their common enemy.

When the hold of the army over the thought process of the Burmese people became loose and they started reading literature about the history and roots of Rohingyas, the common Barmar people generally and the young generation particularly realised that the Rohingya people were not foreign invaders and that they were the inhabitants of Myanmar for centuries. They realised that for all these decades they had been brainwashed to see Rohingyas as foreigners. This realisation has made them apologise to the Rohingyas on Facebook and other social media platforms. 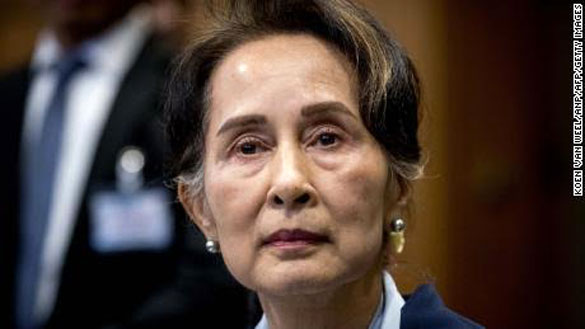 Earlier Suu Kyi was jailed from 1990 to 2015 by the Tatmadaw. In 2015 she was released and elections were held in which she emerged victorious. But her re-election as the head of state in the elections in 2019, made the military apprehemsive of her growing power. So the military toppled her government after accusing her of rigging in the elections and detained her.

However, things don't seem easy for the military this time. She has formed a Government-in-exile with elected members of her party National League for Democracy ( NLD), and with representatives of ethnic insurgent groups and other minor groups on April 16 2021. On May 5, the NUG ( National Unity Government) formed its military wing People's Defence Force. The NUG has sought international recognition for her government. The International Trade Union Confederation has called for the recognition of the NUG government.

Politically and diplomatically Suu Kyi has decided to up the ante against the military junta by announcing that her government-in-exile will try to make the army accountable for their crime against not only the Rohingyas but also against the peaceful protesters. The policy statement of NUG further states"

"We shall actively seek justice and accountability for all crimes committed by the military against the Rohingyas and all other people of Myanmar throughout our history."

Her government-in-exile has promised to abolish or amend the 2008 Constitution and prepare a new constitution which will give equal rights to all the ethnic communities including Rohingyas.

It should be recalled that before the coup Aung San Suu Kyi played to the tune of the army to retain power. She even defended the army in International Court of Justice in December 2019 describing the killings of Rohingyas by the military "with genocidal intent" as 'fake news'.

Now, that political compulsions have made her take a U-turn in favour of Rohingyas, the powerful countries like the US, the UK and particularly the Muslim countries should recognise Suu Kyi's NUG and intensify their campaign against Myanmar's military. Bangladesh, Pakistan, Turkey, Malaysia, Indonesia, Iran, Qatar and other Islamic countries can recognise Suu Kyi's government conditionally.

The fight against Myanmar’s military is going to be long and the majority and minority communities have come together against the military junta. In the coming days and months, the protests against the military will only intensify and take the form of a violent uprising. In March the Myanmar police had intercepted a cache of arms from Thailand. This seems to be the beginning. The total number of members of a dozen insurgent groups in the country is about 100,000 while the total strength of Myanmar's military is 350,000. If all the insurgents come under the umbrella of the People's Defence Force together with the common protesters, they can pose a real problem to Tatmadaw.

Therefore, Suu Kyi can put up a tough fight to the military in the coming days and months. Any unfair trial of Suu Kyi by Tatmadaw will only add fuel to fire and intensify the protests.

It remains to be seen how the Bangladesh government and other Islamic countries use this opportunity to resolve the Rohingya issue.