Muslim NRC in Assam to Start From Today, Will Prove Suicidal For Muslims

Syed Muminul Aowal - The Survey Was Necessary Because Migrant Muslims Are Trying To Merge the Goria, Moria and Deshi Muslims with the Miyas In The Name Of Islam

2. Janagosthi Samannay Parishad under the Assam government will oversee the survey

4. Only Goria, Moria and Deshi communities will be allowed to apply to be included in the list 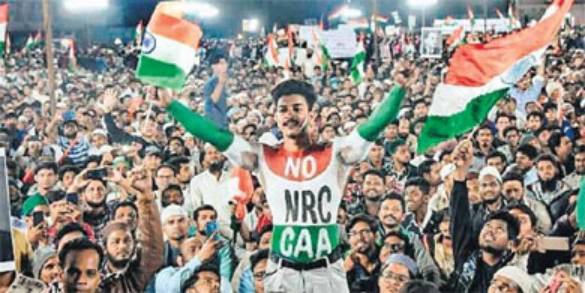 After the NRC of the people of Assam was completed in August 2019, Muslims of Assam have started their own NRC from 15 April 2021 to identify the indigenous Muslims of the state. The Assam Janagosthi Samannay Parishad (JSPA) has taken the initiative. The purpose of the survey is to identify the indigenous Muslim communities of Assam and distinguish them from the Bengali speaking Muslims who form the majority of the Muslims of Assam but are seen as immigrants from Bangladesh. The JSPA has identified and recognised only three communities -- Goria, Moria and Deshi -- as the indigenous Muslims of Assam. The rest of the Muslim population is immigrant from Bangladesh and therefore Bangladeshis in their view. The Bengali-speaking Muslims of Assam are called Miya. The survey has also excluded the Julha community though initially it was included in the survey because the JSPA thinks that they do not belong to the pre-British era period. Julhas or Jolas are mainly tea plantation workers and had come to Assam from Bihar nd UP with the expansion of the Railways in Assam in the 19th century.

The Chairman of the JSPA, Syed Muminul Aowal is at the helm of this survey. He said that the survey was necessary because migrant Muslims are trying to merge the Goria, Moria and Deshi Muslims with the Miyas in the name of Islam. There is an identity crisis in the indigenous Muslim community. Muminul Aowal also observes that indigenous Muslims have suffered economically and politically due to the domination of Bengali Muslims.

Actually, the proposal of this survey of indigenous Muslims has not come from Muslims themselves. The Minority Welfare Minister of BJP government in Assam Ranjit Dutta had made the proposal in 2019. In the Budget session of Assam in 2019, the provision for a Development Corporation of indigenous Assamese Muslims was made. The provision for a socio-economic survey of the indigenous Assamese Muslims was also made in the budget.

On 10 February 2020, a meeting of groups and communities of Indigenous Assamese Muslims was called by the Minority Welfare Minister to finalise the 'socio-economic survey' of indigenous Muslims but the word indigenous (khilonjiya) was unanimously replaced with the specific names of four communities --Goria, Moria, Deshi and Jola. The Minority Welfare Minister had said that a Goria, Moria, Deshi Jola Development Corporation will be set up. Later the Jola community was excluded from the list.

It is to be noted that the head of JSPA Syed Muminul Aowal is also the Chairman of the Assam Minority Development Board, a body under the Minority welfare Ministry of the BJP government and he is close to the state BJP leadership. He is critical of Badruddin Ajmal's AIUDF and the Congress for the poor condition of the indigenous Muslims of the state. He says that 13 districts of Assam are dominated by Bangladeshi Muslims and 13 Muslim MLAs of the Congress are Bangladeshi Muslims. He has also demanded that 102 constituencies of the state be reserved for indigenous Muslims. To him, all the Bengali-speaking Muslims of Assam are illegal Bangladeshi immigrants. He calls the Congress the Bangladeshi Muslim Party.

The Assam BJP government took the cue of the survey from the Assam Accord of 1985 which provided that 'constitutional, legislative and administrative safeguards as may be appropriate shall be provided to protect, preserve and promote cultural, social, linguistic identity and heritage of the Assamese people.'.

But the Accord had not envisaged the narrowing down of the ambit to sub-groups of a minority religious community.

Even if the NRC was meant to identify permanent residents of Assam, it did not mean to include only indigenous people from living there since ancient times. So the survey was not necessary. The Gorias are converts from ancient indigenous tribes. The Morias are concerts of people brought by Ahom kings and they were skilled craftsmen. Deshis are converts from Koch Rajbanshi community. They all came to Assam from 13th to the 19th century. The Bengali Muslims were brought by the British government from Pabna, Mymensingh and Dhaka from 1850 after they annexed Assam in 1826.

The NRC requires citizens to prove their residence in India after Independence or as late as 1971.

The narrow chauvinistic definition of indigenous Assamese has labelled all those Bengali speaking Muslims living in Assam since the second jalf of the 19th century as Illegal Bangladeshi which they are not because Bangladesh came into existence in 1971 and those called Bangladeshis today had only migrated from one part of India to another for livelihood.

Jolas are a community which were brought to Assam from Uttar Pradesh and Bihar with the expansion of the Railways in the 19th century. They were weavers, labourers, technicians and tea-plantation workers. They speak both Bengali and Assamese. That's why they were later excluded from the list.

Apart from them there are some other people living Assam for centuries but have not been included in the list.

If the purpose of the survey is to identify underprivileged sections of the Muslim community, the move can be appreciated but experts fear that this survey will cause deep division among the Muslims of the state on ethnic grounds. They also fear that the results of this survey may be used for NRC which, Syed Muminul Aowal says, has failed.

The survey will be conducted in three months. People will have to apply online to its portal with documents issued by the organisation and government departments. After that verification will be done and the final list will be published.

This initiative of the Assam government has drawn criticism from political and social activists and intellectuals of the state. They feel that it is an exercise to cause division in the Muslim community. The NRC had excluded the names of 14 lakh Muslims ( and 5 lakh non-Muslims) but Syed Muminul Aowal is trying to prove that 90 lakh Bengali Muslims are illegal immigrants or Bangladeshi. This survey which has been termed 'mini NRC will have very serious political and social ramifications not only in Assam but in the whole country.