Concept of Nationalism in Islam 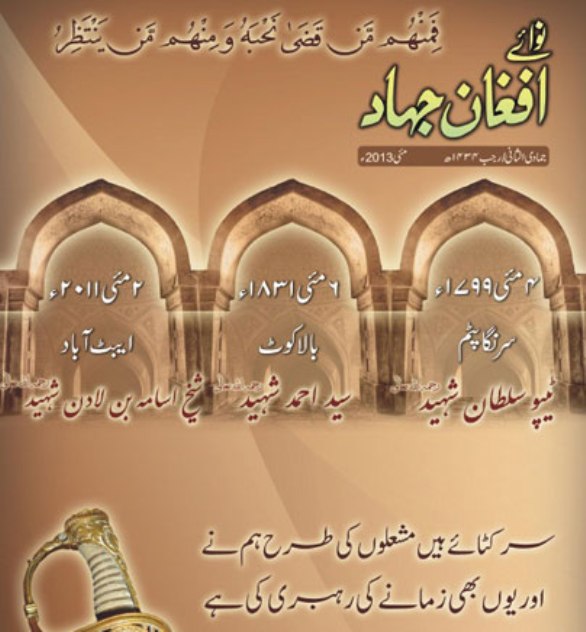 Along with a physical war (terrorism), the Taliban have also waged an ideological war against modern concepts of democracy, nationalism, patriotism and interfaith harmony. They have been publishing their narrow-minded interpretations of the Quranic verses, spreading hatred and enmity among different communities on earth. In every article, they justify bloodshed and killing of people, even innocent women and children on the basis of religion and their sectarian interpretations of the religion which are often in contravention of Quranic teachings.

In the following article too published in their mouthpiece, Nawa-e-Afghan Jihad, May 2013 issue, they present their own obscurantist and retrograde ideas on the modern concept of nationalism and patriotism, showing a total disregard for the lives of the followers of other religions, even people of the book... New Age Islam Edit Desk

The greatest god among the latest gods is the motherland

Its robe is the funeral cloth of the religion

Iqbal had rightly said that among the modern idols, the greatest idol was the idol of nationalism but today this is the most worshipped idol in the world. So it would not be inappropriate if we call it the global idol because all the idols that existed before were worshipped only by those who did not have any belief or religion. But now the idol of nationalism has the distinction that the followers of various religions also worship it, revere it and sacrifice their young sons at its altar. The satanic brains have deliberately injected the love of the idol of nationalism and the theory of the love of motherland into the minds of the Muslims. To further their own interests, these satanic brains got emotional songs and novels written with the help of the media and promoted nationalism. Moreover, they made it more sacred by islamising the theory of nationalism.

God has declared the Kalima the foundation of the unity of Ummah. This is the sacred Kalima by pronouncing which a Muslim living in the west becomes the brother of a Muslim living in the east and a Muslim living in Ajam (Iran) is called the brother of the Arab Muslims.  So long as the Muslims remembered this concept of Ummah and remained loyal to each other, they enjoyed God’s help and support but when they got divided into Muslim communities then it became easy for the infidels to destroy the Ottoman caliphate and dominate them. After dominating them, the Jews and the Christians further divided them into more communities, sometimes drawing artificial boundaries through Sykes-Picot and sometimes through Radcliffe Award and divided the Muslims following a single faith (who was once united under one caliphate) into more or less 57 states.

Later, the apostate rulers to whom the Jews and the Christians handed over the reins of those states removed the love of the Ummah of the prophet from the heart of Muslims with the help of the media and the educational curriculum and taught them to establish enmity or friendship  on the basis of artificial borders. Thus it is result of the continuation of these overt and covert conspiracies that Iraqi army destroys the houses of the Kuwaiti Muslims and says that the attacks were in national interests. Pakistani army ruins the honour of thousands of Bengali women only because they were ‘foreigners’.  The former president of Pakistan who licked the boots of the infidels raised the slogan ‘Pakistan first’ and shed the blood of the Muslims of Afghanistan. Similarly, the Egyptian government does not provide shelter to the Palestinian fighters because their foreign policy prevents them from doing so. The spirit behind all this obnoxious game is ‘patriotism’. That’s why naturally the question occurs in the mind, is there room for patriotism in Islam? Did any prophet preach patriotism? Only Islam givers answer to this question. Following are some examples from the lives of prophets:

The Ways of Prophet and the Concept of Nationalism

“You will find the believers united in mutual sorrow, love and mercy as though they were a single body that if one of the organs is in pain the whole body suffers from sleeplessness and fever.” (Bukhari)

Prophet Noah (pbuh) also left his motherland and when the residents of the motherland rejected him, he cursed his compatriots and said, “O my Lord, do not leave the house of any infidel on earth” (Surah Nuh)

The worshippers of the idol of nationalism should also take the example of the life history of Prophet Abraham who rebelled against all the gods of earth and gave them such a thrashing the idol worshippers could not forget nor did the idol-breakers forget the tradition.

It becomes very clear from the examples given below that the concept of the love of motherland does not exist in the Shariah of the prophet Muhammad (pbuh) in the same way as any kind of bias (ethnic, linguistic and cultural) is not permissible in  Islam. The prophet (pbuh) said:

“Whoever committed bloodshed under a banner whose purpose is not clear or became angry because of any bias or called people towards  bias or helped someone on the basis of bias and was killed in that state, died as though in the state of Jahiliya (ignorance)” (Sahih Muslim)

One misconception should also be removed here. People harping on patriotism produce the argument that the holy companions of the prophet also fought in defence of Madina. Well, the answer is here. The holy companions had fought in defence of Madina because it was a Darul Islam (Islamic state) that is, an area where Islam was practically implemented. And at this moment there is no country in the world where Islamic laws are truly implemented (except in Yemen, Somalia and some areas of Afghanistan). If someone thinks that God’s laws are implemented in Pakistan, he should take one example. It is God’s law that the hand of the thief should be cut off whereas in Pakistan, the punishment for stealing is imprisonment for a few months. Moreover, an area cannot be called an Islamic state merely because Muslims form the majority there but Islamic state is the area where God’s law is implemented. For example, some of India’s areas were included in Islamic state during Hadhrat Umar’s caliphate.

When we ponder over patriotism, one thing becomes clear that it is a temporary spirit which is generally at its peak during the times of war or surfaces when people of the country are in distress. It remains elusive during the time of peace whereas the concept of one Ummah is a constant theory that always manifests itself from the words and deeds of Muslims. It is not conditioned on war and peace. To promote patriotism, the government takes the help of emotional songs and female singers (because no verse of the Quran and no Hadith supports this theory)

One example will make the truth even more clear to you. Suppose two brothers are standing on the border of their country. One of them crosses the border and enters the other country. Are the two brothers now enemies? No, definitely not because there is a blood relationship between the brothers. In the same way Muslims are related to each other through the Kalima. The artificial lines drawn by Radcliffe cannot set Muslims against Muslims. Muslims are one Ummah. God says in the Quran:

“And definitely this Ummah of yours is one Ummah.” (Surah Al Muminun)

This should be kept in mind that an American Muslim is our best friend while an Arab or Pakistani kafir is our worst enemy, even if we are born of the same mother. Imam Ibn Taimiyyah rightly said:

What kind of bias are those harping on patriotism suffering from? Let them answer the question:  if someday Imam Mehdi appears, will they not follow him only because he will be a foreigner? Don’t they think over the fact that the army of Jesus will not belong to a single country?