Israeli Democracy Is Backsliding, But To Where?

By Max Fisher and Amanda Taub

Two notable things happened in Israel this week and, while only one made the front page, the stories, in tandem, reveal something important about the country and its future.

On Tuesday, the Israeli police recommended that Prime Minister Benjamin Netanyahu be charged with bribery, fraud and breach of trust. This is a big deal; it could topple his premiership.

It’s worth considering that alongside a less-discussed event from the day before, when Ayelet Shaked, Israel’s justice minister, advocated for a so-called nationality bill, which would officially enshrine Israel as a Jewish nation. Ms. Shaked, a right-wing nationalist known for provocations, said, to some controversy, “There is place to maintain a Jewish majority even at the price of violation of rights.”

Together, these two events tell us something meaningful about the health of Israeli democracy, whose future is subject to growing debate.

A disclaimer: there are two partially overlapping “fate of Israeli democracy” conversations. One is about whether Israel can call itself a democracy as long as it maintains its forcible occupation of the West Bank, whose Palestinian residents lack basic rights. The other conversation, the one gaining urgency in recent years, is whether democracy within Israel proper could recede, or is already doing so.

Now to this week’s news. You could draw seemingly contradictory conclusions about Israeli democracy from the two events.

On the one hand, the Israeli police are, at least so far, showing every sign of political independence on the Netanyahu case. Recommending charges against the prime minister is a big deal. Mr. Netanyahu has also not outwardly meddled in the case, suggesting he, his party and his supporters are all constrained by norms of police independence.

It’s hard to get excited about the absence of something, but the absence of political meddling in Israel’s police and justice systems, at least over this case, is an important sign of democratic health.

Contrast that with, oh, we don’t know, the United States of America, where the president is openly pressuring senior F.B.I. and Justice Department officials to drop an investigation into the election that could implicate him personally.

This gets to something important. The political scientists Daniel Ziblatt and Steve Levitsky write in their new book, “How Democracies Die,” that, in order for a democracy to persist, its leaders must exercise what the authors call “forbearance.” This means that leaders restrain themselves from politicizing democratic institutions — say, law enforcement or the courts — even when it would be legal to do so.

Now consider Ms. Shaked’s speech in defence of the nationality law. Her comments, to be clear, are not particularly new for her. Still, it is striking to hear a senior government official say that some rights abuses are acceptable costs for preserving her country’s Jewish identity.

This hits at the contradiction at the heart of Israeli democracy. The country’s all-but-official identity is the oft-repeated phrase “Jewish and democratic.” But can a country enshrine democratic principles like equality under the law and one-person-one-vote if it also officially privileges one demographic group above all others?

Many countries face versions of this contradiction. France defines itself as democratic and French, an adjective that describes the French nationality as well the French ethnicity and French language. And France, like Israel, is struggling with what it means to balance national identity with a democratic duty to incorporate an increasingly diverse population. It’s not an easy task for any country.

What makes Israel different is its occupation of the West Bank and embargo on Gaza (many Gazans consider this a continuation of the Israeli occupation, which otherwise ended with a 2005 withdrawal). The country cannot fully separate its occupation of Palestinians outside its borders from its struggle over how or whether to democratically incorporate the Arab minority within its borders.

They are not the same issue, but they connect in so many ways that they cannot be addressed separately, either. And they feed into one another. When violence related to the conflict with the Palestinians spikes, so does Israeli scepticism toward pluralism and democracy.

Exposure to terrorism tends to increase support for extreme politics in a number of ways, according to a 2015 study led by Daphna Canetti-Nisim, a political psychologist at the University of Maryland.

For one, it increases hostility toward minorities. People who endure terrorism “feel threatened and vulnerable,” the study found. This “psychological distress” makes them more likely to retreat to familiar in-groups and view outsiders as threats. This in turn is associated with declining support for democratic norms.

This is how debates over the nationality law take on such high stakes that Ms. Shaked, though she argues Israel can be both Jewish and democracy, advocates policies that would privilege the former at the expense of the latter.

You see the effect in polls showing that Israelis increasingly believe they will have to choose between an Israeli or Jewish national identity. And you see it in Israeli institutions, which have been gradually re-engineered to service the occupation. The needs of maintaining that occupation are "seriously hampering, if not reversing" the "process of self-democratization of the state," according to a 2012 study by the Israeli researchers Tamir Magal, Neta Oren, Daniel Bar-Tal, and Eran Halperin.

All of which helps to explain this chart: 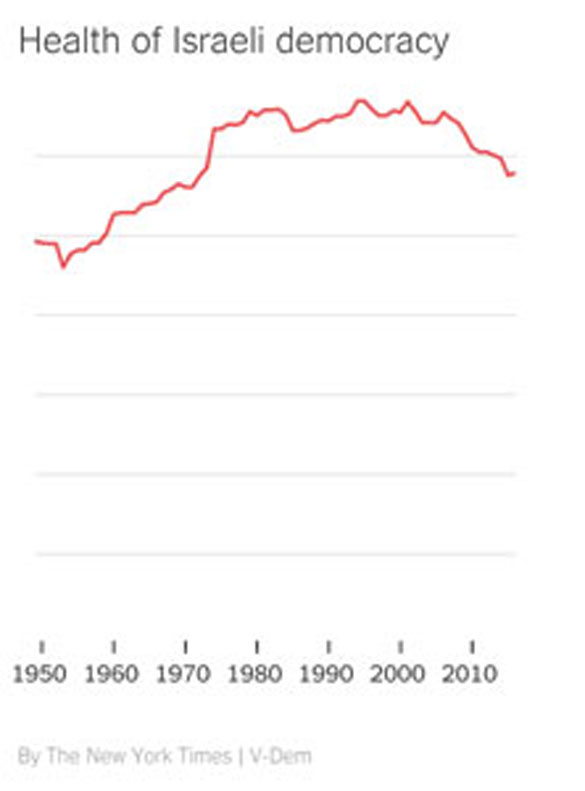 This chart shows the status of Israeli democracy, as tracked by a multi-variable index known as V-Dem, which is increasingly the gold standard for measuring democracy. The higher the score, the better a country satisfies the conditions of a functioning, liberal, egalitarian democracy.

Israel’s score has, as you can see, been dipping significantly since the early 2000s, when a round of terrible violence known as the second intifada led many Israelis to take a harder line on the conflict. Its score peaked in the mid-1990s, when it was on par with present-day South Korea, Jamaica and Mauritius.

For context, its score is now about on par with that of many mid-performing African countries such as Namibia and Senegal. It scores well below Tunisia, the Middle East’s best-performing democracy, and only somewhat better than Poland and Hungary, two notorious democratic backsliders.

The question is whether or not Israel should be categorized with the Polands and Hungarys of the world, whose leaders tend to follow a specific, recognizable playbook in dismantling their democracies from within. Or is Israel a particular case owing to particular factors, namely its conflict with and occupation of the Palestinians?

Or is that a false distinction? After all, democracies tend to backslide when its populations feel embattled and endangered, leading them to embrace hard-line policies to manage the threat and to rally around charismatic leaders who promise safety.

We don’t feel like we yet have a good answer to these questions, or a firm sense of how Israeli democracy does or doesn’t fit within the world’s other backsliders. This week’s news is a reminder of that. But we’ll keep looking into it and will let you know what we find.