2. He said loudspeakers can be used by only one mosque in an area and the rest of the mosques should  call the azan without loudspeakers

4. Some people called for his boycott

5.Maulana Rahmani had to retract his statement

In the 15th April issue of Urdu daily Rashtriya Sahara, Zafar Darik Qasmi laments the narrow-minded approach of common Muslims on important social and communal issues. In this regard he gives an account of a controversy involving the use of loudspeakers by Muslims for calling the Azan. It is known to all that during the last a decade or two, opposition to use of mike for calling the five times azan has grown. This opposition to the use of mike was first demonstrated by Bal Thackeray in the 90s by saying that he could not tolerate the azan on mike even for three seconds. During that period, Muslims had started installing mikes in mosques for calling the azan. Before that, till the 70s or 80s, most of the mosques, especially in rural or semi urban areas mosques did not use mike and muezzins used to call the azan from the azangah or a mounted place.

Loudspeakers were used only in big cities. But by the 90s, the use of mike grew and it became an essential part of every mosque in urban and rural areas. In the later period, the loudspeakers assumed such an important place in the religious activities of Muslims, that even the five times prayers were conducted on loudspeakers though the number of regular devotees participating in five time prayers was very low. In the dawn prayers, the number of Namazis was even below ten. But the mike was used to call the azan. In some mosques, three or four loudspeakers are tied to one minaret.

Keeping in view the growing opposition to azan on loudspeakers, Muslim intellectuals and even some Ulema advocated limited use of loudspeakers for azan to avoid confrontation.

One of the Ulema who advised Muslims to use loudspeakers for azan in a limited way is Maulana Khalid Saifullah Rahmani. Zafar Darik Qasmi in his article published in Rashtriya Sahara wrote that Maulana Khalid Saifullah Rahmani recently appealed to Muslims to reduce the use of loudspeakers for azan. He put forward the suggestion that if in a Muslim locality, there are more than one mosques, the azan should be called on loudspeakers only from one mosque and azan should be called without loudspeakers from the rest of the mosques. This suggestion was not bad, rather prudent. But unfortunately, the advice caused adverse reactions from the Muslim community and some of the so-called intellectuals even called for a social boycott of Maulana Khalid Saifullah Rahmani. According to the writer, his statement was condemned by a section of Muslims and as a result, Maulana Rahmani withdrew his statement. 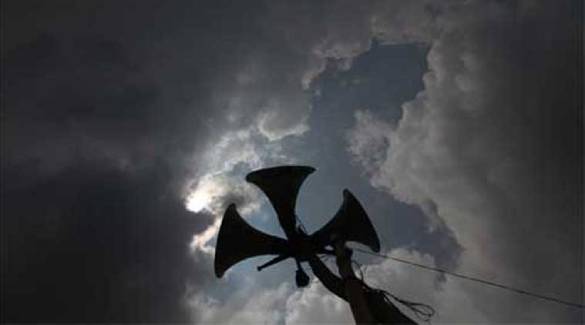 This speaks of the obsession of Muslims with the loudspeaker. Now the loudspeaker has become so important to them that opposition to the use of mike is construed as opposing Islam though loudspeaker is not mandated for Islamic religious events. Use of loudspeakers for calling the azan is only a late 20th century phenomenon in India. Before that, loudspeakers were not used for azan or for Milad in small localities. Loudspeakers were used only for big congregations or meetings. That a religious figure like Maulana Khalid Saifullah Rahmani is denounced for advising against the use of loudspeakers for azan to the extent that he has to withdraw his statement is not in the good interests of the community. The Muslim community now does not even listens to its Ulema and perhaps has got the belief that whoever advises not to use loudspeakers for azan is an enemy of Islam. On this count Maulana Khalid Saifullah Rahmani and singer Sonu Nigam are put on the same pedestal. Its very dangerous.

Not only loudspeakers are considered important for azan but also for other social events like marriages or festivals. Nowadays DJs are used for playing cassettes of Naat or filmi songs on the occasion of Eid Milad-un-Nabi or on weddings. Residents cannot oppose the playing of Naat on high decibel sound boxes for fear of being branded enemy of Islam or oppose playing filmi songs for fear of being accused of spoiling the festive mood. No one cares for the inconveniences caused to the Muslims and non-Muslims of the area by high decibel sound of DJs the whole day.