Why Would Arabs Care About Israeli Repression of Palestinians?

THE one constant in life is that nothing is permanent, and everything is in perpetual motion.

From sub-atomic particles to the giant spheres that float silently across the skies, we are all part of the great celestial dance. So the idea that empires, dogmas and beliefs are carved in stone that will last forever is a delusion created by puny humans who think a few generations are an eternity. But as the ruins of dead civilisations across the world attest, nothing we create is forever. 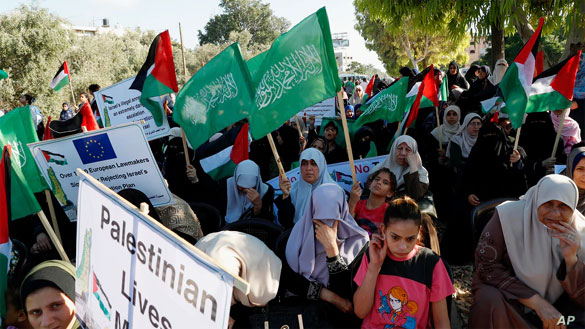 FILE - Hamas supporters protest against Israel's plan to annex parts of the West Bank and US President Donald Trump's Mideast initiative, at the Palestinian side of Erez checkpoint between Israel and Gaza, in Beit Hanoun, Gaza Strip, July 9, 2020.

Against this background of change and evolution, the idea that Arab policies towards Israel would remain frozen in time unsurprisingly turned out to be a huge fallacy. Firstly, the notion that the ‘Arab street’ would explode if Israel were to be recognised was punctured once and for all. In fact, this has been a much-overrated concept ever since the first Gulf War in 1990.

But apart from a few scattered demonstrations, the response was tepid. Saddam Hussein had certainly not helped his cause by first invading Kuwait. But for Americans to enter Saudi Arabia and use it as a base for launching its attack was not seen by most Arabs as a very big deal.

So if the common reaction was not going to be a deterrent, what would stop Arab rulers from recognising Israel? After all, they are nasty towards their own people, so why would they care about Israeli repression of Palestinians?

Why Would Arabs Care About Israeli Repression Of Palestinians?

One reason the support for the Palestinian cause has diminished in the Middle East is that the younger generation has greater concern for their own education and employment than whatever the Palestinians are going through. They want their leaders to focus on them and their needs, rather than fight distant battles.

Iran is another factor that drives many Arab states to side with Israel. Tehran’s aggressive use of proxies to gain support across the Middle East has angered many. But it is Tehran’s apparent determination to produce nuclear bombs that causes the greatest concern, especially in Saudi Arabia. So when the UAE urged the US to “cut off the head of the snake” in a bombardment of Iranian nuclear facilities, it was enunciating official policy.

The recent recognition of Israel by the UAE is driven by its reading of the evolving American policy towards the Middle East. The new approach, first taken by Obama, was to reach out to Iran through an agreement that would freeze its nuclear ambitions for a time in return for a lifting of sanctions. Obviously, such a policy was anathema to Israel which convinced Trump to dump it in when he came to power in 2016. But even Trump refused to bomb Iran although American Special Forces have, apparently, conducted covert operations against Iranian targets.

In return for UAE recognition, Israel says it will “suspend’ its planned annexation of much of what remains of Palestinian territory. Although the UAE claims this to mean a cancellation of the annexation policy, we all know that when it comes to land, the Israelis will grab all they can and then negotiate for more.

Thus far, Saudi Arabia has refused to follow the UAE’s lead. But once the Crown Prince, the thuggish MBS, takes over completely — and it won’t be long before that happens — my guess is that he will join the American-led pro-Israel, anti-Iran alliance.

For decades, the Palestinians have dreamed that the righteousness of their cause would keep the Arabs — and much of the world — on their side, and that one day, they would get their own state, albeit on a much-reduced scale. Dream on. As time went on, more and more land was grabbed by Israeli settlers.

Now well over half a million of them live in houses built on land handed to them by the state. These settlements are connected by roads only they can use; these, together with the vast wall that separates Israel from the West Bank, has cut off ancient Palestinians towns, villages and farms from each other.

Our prime minister has announced that Pakistan will not recognise Israel until it returns occupied land to the Palestinians. While this will hardly enter Israel’s calculations, it does raise questions about what recognition implies. Is it a prize for good behaviour? If so, half the countries in the world would not recognise the other half.

Turkey, despite all the fuss Erdogan has made about the UAE initiative, has had an embassy in Israel for decades. Egypt and Jordan have had full diplomatic relations with the Zionist state since the 1970s and 1990s respectively. Many other states have traded with Israel for years.

India has built up its relations with Israel mainly so it can buy high-tech weaponry unavailable elsewhere. So each state has its own reasons for moving on. When a deadlock occurs, it is usually the stronger party that imposes change. There is no morality or justice in the great celestial dance.