A Year ago, RSS Chief Mohan Bhagwat had stated (October 10, 2019) that Indian Muslims are happiest in the World due to Hindus. Now he goes on to say that most content Muslims are only in India. Not content with that he went on to state that “if there is any example world over wherein a foreign religion that ruled over the people of a country still exists there”, it is here in India. And further “”Our Constitution did not say that only Hindus can stay here; hereafter only Hindus will be heard here; if you want to stay here, then you have to accept the superiority of Hindus. We created a space for them. This is the nature of our nation, and that inherent nature is called Hindu”. Wearing the hat of a historian he stated that many a Muslims fought for Rana Pratap against Akbar, exemplifying that people of all faiths stood together whenever there was an attack on India’s culture.  He labelled Ram Temple is a symbol of national values and character. 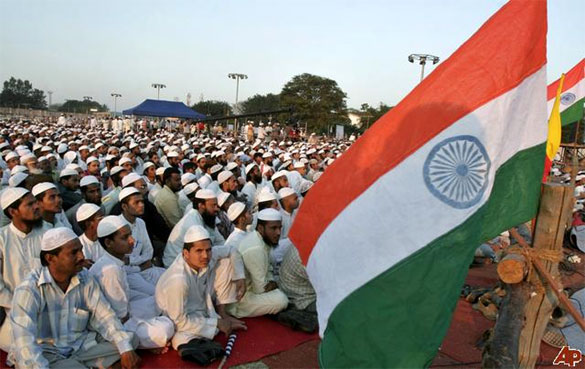 Most of these formulations are a ploy to deflect the criticism which RSS, as the patriarch of Hindu Communalism is facing currently, at home and also internationally. The plight of Muslims has been deteriorating at rapid pace during last few decades. Adding on to the violence against them in the wake of Rath yatras for Ram Temple, the mob lynching’s in the name of cow-beef, the social intimidations in the name of love jihad, ghar Wapasi have peaked during last few years. The cumulative intimidation of Muslim community did find its expression in the most democratic Shaheen Bagh movement. The violence that took place in the aftermath saw the heavy loss of Muslim lives and great damage to their properties and holy places. The image of communalism as tormentor of weaker sections of society is going up, so probably Mr. Bhagwat is quoting Indian Constitution, which most leaders from his Parivar decry, criticize and call it as being unsuitable for India as it is based on foreign values. On the contrary Shaheen Bagh movement showed the peak respect for the same when ‘Preamble of Indian Constitution’ formed its core slogan and ideology. 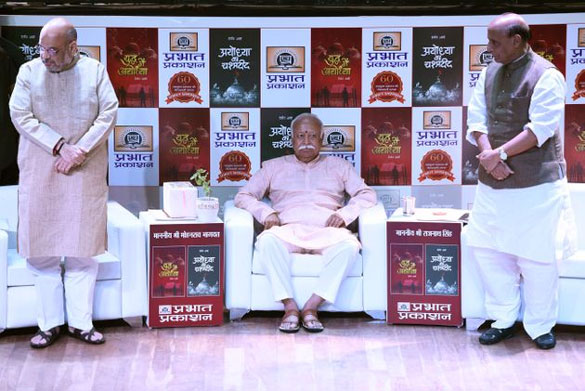 Undoubtedly, Indian Constitution wants a plural democratic India while RSS parivar wants a Hindu nation. For Indian Constitution religions are not foreign or native, they are universal and we have a full freedom to practice, preach and propagate our religion, we also have a freedom not to adhere to any religion.

The RSS Sarsanghchalak probably does not know that nationalism and religion were separate in the scheme of freedom movement of India where people from different religions and atheists participated with equal zest in fighting against the British rule. He may be unaware that in South East Asian countries the major religion is Buddhism, which originated in this land but is the major religion in those countries.

The communal view of History has been the mainstay of his organization, rather his Parivar’s politics. When he says that even Muslims participated in battle against Akbar, to save the Indian culture, he is taking the distortion of History to further level. In what way did Rana Pratap represent Indian culture? He was a King of Mewar. In what way the battle between Akbar and Rana Pratap was for Indian culture. Akbar, for that matter most of the Muslim kings, who ruled here, became the part of this land. Akbar in particular was for multi-faith society that is why he conceptualized Sulh-E-Kul (Harmony among religions). And as Muslim Hakim Khan Sur was part of Rana Pratap’s army (saving Indian culture!), so was Raja Mansingh leading the forces of Akbar! Quiet a garbled up exercise to project Rana Pratap as symbolizing Indian culture, forgetting Raja Mansing was leading forces from opposite side.

So far RSS history has been presenting Rana Pratap and Shivaji as heroes of Hindu nationalism, now probably they have learnt that both these warriors had Muslims in their army and similarly their rival Muslim Kings had Hindus also on their side. These battles have nothing to do as being for and against Indian culture. As such Indian culture flourished during this period leading Jawaharlal Nehru to call this as ‘Ganga Jamani Tehjeeb’ (Syncretism, pluralism at peak). The peak of this was Bhakti and Sufi traditions, which focused on humane aspects of life.

As far as Ram Temple being the symbol of national values and culture, we should recall Bhimrao Ambedkar’s ‘Riddles of Rama and Krishna’, where Ambedkar and later Periyar criticize the Lord for killing a Shudra Shambuk, when he was doing penance, killed Bali from behind and banished his pregnant wife Sita on mere suspicion. Symbol of Indian nationalism is freedom movement and Indian Constitution.

Indian Constitution gives equal citizenship rights to people of all religions, ethnicities, regions and languages. The problem is that communalism regards this as a Hindu nation and so Muslims and Christians are regarded as foreigners.  Accordingly earlier Sarsanghchalak M.S. Golwalkar in his book, ‘Bunch of thoughts’; calls them internal threat to the nation.

To call that Indian Muslims are happiest in the World due to Hindus or they are most content in the World, must a joke. In the light of the rising violence against them, the rising ghettoisation of the community and their declining political representation tells another tale. To cap it; now a section of media, which is part of the communal project, is coining words like Corona Jihad, Corona bomb and the last in the series is from Sudarshan Channel, which sees four odd percent successful Muslim candidates as Jamia Jihadis and others with them as a part of planned jihad to take over civil services!

Such statements like Indian Muslims are most content or happiest is like rubbing salt on the wounds of a besieged community, which is trying its best to live the values of Indian Constitution as witnessed during Shaheen bagh movement.