The Delhi election results should come as no surprise at all. Right from the very start, it became apparent that Arvind Kejriwal and his party (AAP) will be comfortably returning to power. Their campaigns were about basic civic issues like education and health and it is true that their work was beginning to show real effects on the lives of people, especially the poor. It is extremely heartening to see that some of their best minds have won the elections which shows that given a genuine option, the electorate is wise enough to choose the smartest people. 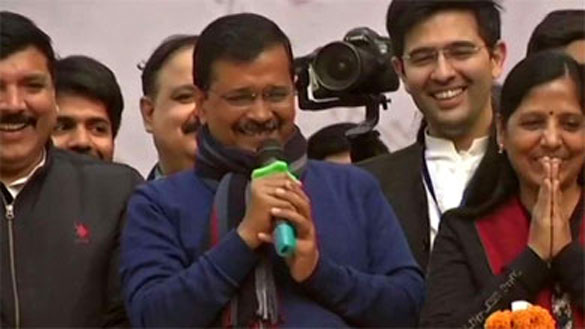 However, in many ways, this election was fought over an imaginary Muslim fear. It was stated that Muslims were conspiring to cut Delhi off from the rest of the country; the protests that they were doing was about de-stabilizing India rather than being an outcome of a genuine grievance; and Muslims were conspiring to rape Hindu women if the BJP got defeated in these elections. Words will not be enough to condemn this kind of vitriol against the Muslim community, but then, it appears that even such hate and vitriol did not rouse all the ‘Hindus’ to vote in favour of a particular party.

Should this victory of AAP give comfort to Muslims? This question is complicated and has no clear-cut answers. Certainly, the BJP did not win in Delhi, but does it mean that their ideology has been defeated? Let us look more closely at the response of AAP to the Muslim protests in the city. Kejriwal’s party maintained a stony silence on the issue of Shaheen Bagh and many other similar protests within Delhi. Forget about going to these sites and showing solidarity with Muslim protestors, he in fact said that left to him, he would clear the protest site within two hours. Throughout his campaign, he refused to utter even a single word on the issue of Citizenship Amendment Act or the proposed National Register of Citizens, both issues which have created considerable anxiety and fear within Muslims. Worse still, he hardly campaigned in Muslim areas.

By not confronting the BJP upfront over their communal politics, the AAP certainly played soft communalism. Many have argued that this soft communalism is good as it helped to keep the hard communalism of BJP out. Certainly, it did. But at what cost? In choosing to remain silent over Muslim demonization, AAP may have won the battle but perhaps it is in the process of losing the war. Only time will tell whether for Kejriwal and his party, this was a strategic silence or he also thinks about Muslims the way many parties think of them.

It should also be pointed out that it is definitely not a problem when Mr. Kejriwal goes to pay his obeisance to a temple right after this victory or whether or not he should have recited the Hanuman Chalisa during the elections. He has never claimed that he is not a believing Hindu and therefor has every right to exhibit this religiosity as when he feels like. Especially in a situation wherein, the BJP was trying to portray him as a closet Muslim, it made much sense to assert his Hindu self. Those Muslims and secularists who have a problem with his ‘new found’ religiosity must make a difference between cultural Hinduism and political Hinduism. We should never have a problem with cultural Hinduism especially when we are arguing that Muslim religious identity is under considerable stress today. Cultural Hinduism is as much of a positive identity as is Islam or Christianity. It is Hindutva (political Hinduism) which we need to worry about because of its innate desire to create an enemy other without which it cannot survive as an ideology. No wonder, Hindutva is not just a threat to other religious identities, but also to the pluralistic tenets of Hinduism.

So, no one should have an issue when political personalities partake in the rituals of their own religious traditions. After all, Gandhi was much immersed in his own brand of Hinduism but it did not ever stop him from relentlessly criticizing the failings of his own religious tradition. However, with regards to Kejriwal and his party, things do not stop at just cultural Hinduism rather it goes way beyond. His silence over the hounding of Muslims is a cynical attempt to signal those Hindu voters whose hatred towards Muslims has created this crisis in the first place. The question is whether this kind of a politics will ultimately be successful in stemming the tide of Hindu radicalism? Perhaps not. Despite his silence on core issues affecting the Muslim community, how should we explain that the other side managed to increase its vote share to over 40 percent? The choice between avoiding the evil and confronting it may be a tricky one, but history has always shown that it is the latter which eventually defeats it.

Yet Muslims have voted overwhelmingly for his party. Kejriwal certainly knew and tapped the insecurity gripping the Muslims. It was as if he did not need their votes, but Muslims needed to vote for him. Like other parties, he also took them for granted because Muslims have not been able to create an alternative political imagination for themselves in this country. Muslims did not have any other option. Even die-hard Congress loyalist voted for the AAP this time because they correctly thought that only AAP could defeat the BJP. This certainly is not new for Muslims; they have voted for the Congress and other regional parties by the same logic. But this is also a reminder that Muslim political representation needs to chart out a new course. A course in which they are able to decide whom to vote for based on some concrete agenda which helps the community. Although many Muslims are opposed to this idea, but many also think that this is an idea whose time has come.