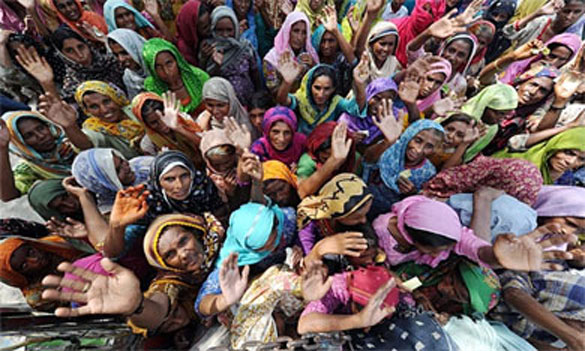 Mohammad Shakir was brushing his teeth at his home in London’s East Ham one morning in September last year. He was checking his emails on his Smartphone at the same time. When he saw a message forwarded by a colleague, he couldn’t quite believe it. “It was one of those moments when you reorganise your day,” he recalls.

On 23 September, the Muslim Charities Forum (MCF), an umbrella organisation for 10 UK-based, Muslim-led international NGOs – including Islamic Relief, Islamic Help and Muslim Hands – was dealt a devastating blow after a newspaper reported some of its well-known members had links to terrorism.

Six days later, the Department for Communities and Local Government (DCLG) told the MCF to stop its work on a major scheme to foster integration, for which it had received a £250,000 grant. “It was hugely disappointing,” says Shakir, an MCF spokesman. “Eight months of work and the project was suddenly stopped.”

In December, the DCLG pulled all its funding for the project, a decision greeted with incredulity by the MCF. The charity and its members fiercely deny any links to terrorism, and the communities department is now reconsidering its decision. Yet the organisation remains in a state of limbo, mulling over legal action, with funding for its flagship project abruptly terminated.

More than a quarter of the statutory investigations launched by the Charity Commission since April 2012 have been directed at Muslim charities associated with running mosques, providing humanitarian relief or undertaking aid efforts in Syria. And international banks froze a number of Muslim and non-Muslim charity accounts last year, particularly those active in the Middle East, over fears that the money could end up financing terrorism.

The prime minister this week announced a review of how to increase integration in British communities as part of a five-year strategy for tackling extremist ideology, saying it was the “struggle of our generation”. But many Muslim charities in the UK feel the scrutiny they are under by the authorities could breed further alienation.

Samir Al-Haidari, director of the AhlulBayt Islamic Mission (Aim), a prominent grassroots organisation, believes the funding cut for a faith project risks turning young Muslims against society. “The majority of Muslims want to affiliate with this country, and they will need support to help develop and prosper as a community. When these kind of cases arise, it slows down the progress and we lose people on the fringes of those communities who turn towards extremism,” he says.

Ben Jackson, chief executive of Bond, a membership body for organisations working in international development, says: “We completely understand the need for vigilance in terms of funds going to people who directly or indirectly support terrorism, but we do see it [the targeting of charities] as a wider pattern of unevidenced assertions around fears of what might be happening.”

In the UK, charities remain some of the biggest and most important Muslim institutions. Over the last 20 years, they have grown rapidly, fuelled by geopolitics and turmoil in the Middle East. Islam instructs followers to give 2.5% of their wealth to the poor every year. Generosity is one of the pillars of the faith. As the Qur’an says: “You shall give the due alms to the relatives, the needy, the poor and the travelling alien, but do not be excessive, extravagant.”

So what is the effect on the community when Muslims see these prized, highly respected institutions performing vital humanitarian work around the world being tageted ?

The MCF’s difficulties began when the Daily Telegraph published a story alleging that some of its members had connections to the Union of Good, a global coalition of over 50 charities that was designated a terrorist organisation by the US in 2008 for its ties to the Palestinian group, Hamas. However, in 2009 the Charity Commission had spoken to all the charities accused, except Islamic Relief, about their alleged involvement with the Union of Good, had confirmed they weren’t members and had closed the matter.

Shahid Bashir, senior fundraising manager for Muslim Hands, an Islamic aid charity that – since its launch in Nottingham in 1993 to help people in Bosnia – has raised £115m, says: “We expect parts of the media to say negative things about Muslims. What would frighten people is if they believed the media was now beginning to affect our government policymakers.”

The MCF was at the forefront of the government’s broader strategy to counter extremism through closer work with communities. It led the Faith Minorities in Action project, a government initiative that started early last year to promote integration through training young people and interfaith work. Until it was told to halt work, the MCF had held nine consultations in six cities across England to establish the key challenges facing faith communities. It had spoken to 100 community leaders after months of meetings with imams, church figures and other faith leaders. Groups such as Faiths Forum for London and the Christian Muslim Forum had been selected to help deliver the project.

The project was set up in conjunction with the Extremism Task Force, established in the wake of the Lee Rigby killing in 2013, to reassess the government’s strategy for dealing with radicalisation and extremism. Since 2011, the DCLG has spent £50m on integration projects.It said the provision of funding is carefully considered and monitored, based on value for money and chances of success.

But many Muslims believe that their community is being demonised as stringent and unpopular counter-terrorism laws erode civil liberties and political freedoms. Shaista Gohir, chair of Muslim Women’s Network UK, says: “Policies and government strategies are now targeting law-abiding Muslims and organisations, so Muslims are worried. What excuse will be used to target us next?”

Earlier in the year, a public statement signed by a number of high-profile Muslim figures criticised the government’s latest counter-terrorism legislation, saying it risked creating “a ‘McCarthyite’ witch-hunt against Muslims, with nursery workers, schoolteachers and universities expected to look out for signs of increased Islamic practice as signs of ‘radicalisation’”.

Al-Haidari thinks the government’s definition of extremism is too vague and is open to interpretation. “Anyone can be an extremist right now,” he claims.

Bashir says the over-emphasis on defining and legislating against extremism and radicalisation means that Muslim charities are having to vet not only who they send money to, but also donors (as are some non-Muslim charities working in Syria, such as Save the Children). “It’s like we’re being told you must treat not only yourselves but everybody around you as a suspect,” he says.

During Ramadan the commission and the MCF worked together to run a “safer giving” campaign. But Bashir believes that the scrutiny on Islam risks widening the schism between Muslims and other faiths, leading to further segregation of communities. “It makes people feel that there is no place for Muslims in modern Britain and that we are being relegated to second-class citizens.”

A DCLG spokesman told the Guardian: “In December 2014 the then secretary of state, following a formal review which included examination of allegations made in the press and the organisation’s performance in delivering against agreed objectives, took the decision to terminate the funding of the MCF. Following representations from the forum, the department has now agreed to retake the decision on funding. It wrote to the MCF, setting out its concerns about the forum’s performance, and we are currently considering the forum’s response.”

The Charity Commission confirmed that the MCF had notified it of the funding cut. “The charity did the right thing in informing us and filing a serious incident with its regulator proactively and promptly,” a spokeswoman said.

Sir Stephen Bubb, chief executive of Acevo, which represents charity chief executives in the UK, says: “You can’t have an effective counter-terrorism strategy that doesn’t look at drawing in communities to help fight extremism. The very organisations that you could be using as your allies are feeling on the outside, that they are not valued or wanted.”