Hazro: A Small Pakistani Town of Mandirs and Gurdwaras

Archeologist Dr Ahmad Hasan Dani, in one of my frequent meetings with him, remarked that Potohar is an open-air museum of history. The entire landscape, stretching from Rawat to Taxila and Katas, is dotted with remarkable monuments.

Dani’s remark inspired me to explore the Potohar region. It was during one of my expeditions that I traveled to a small town named Hazro - a tehsil of the Attock district, Punjab, and was instantly smitten.

Formerly a fortified town with four gates, Hazro is home to many temples, gurdwaras and havelis believed to have been built during the Sikh and British era.

I was, however, saddened to note that these once-magnificent edifices are now giving way. The Sikh gurdwara located at the Retla Mandi needs urgent renovation. The dome that crowns the monument has partially caved in. Paintings that once decorated the inner space of the structure are decaying.

These disintegrating structures present only a shadow of the grandeur they once had.

We can still see some paintings that adorn the walls of this gurdwara which depict Sikh gurus, most notably Baba Guru Nanak and his companions Bala and Mardana.

One also finds some murals of the Khalsa heroes. A close look at these artworks reveals illustrations of Sikh nayikas (heroines) who appear to be holding up mirrors to see their own beauty.

Depictions of such nayikas can also be found in various other Sikh and Hindu havelis, temples or mandirs located in different towns and villages of Potohar. However, the most beautiful representations can be seen in the haveli of Baba Khem Singh Bedi in Kallar Syedan, Rawalpindi.

Apart from the gurdwaras, havelis also dominate Hazro’s landscape. Some of the most impressive havelis belonged to two brothers Bal Makan Shah and Gokal Shah.

Balam Khanda, the haveli owned by Makan Shah, is a fabulous piece of architecture where a Muslim family currently resides.

The haveli of Gokal Shah, on the other hand, has been transformed into a sabzi mandi (vegetable market) which has diminished the beauty of the original edifice. The structure was well-known for its vastness and aesthetic appeal, and demonstrated the wealth and social stature of the owner. But now its paintings have lost their color and the once-beautiful jharokhas too have dulled.

At the time of its construction, Gokal Shah was the magistrate of Hazro. According to a notable resident of this small town, Hakeem Naeem, Shah owned much of the arable fields in the area. Half of the total land in Hazro was owned by the brothers. Later on, Gokal Shah’s son embraced Islam and was renamed Yousaf.

Hazro is also home to two temples. The first is located in Shahbaz mohalla and is dedicated to the Hindu god Shiva. Its interiors are decorated with ceramics. 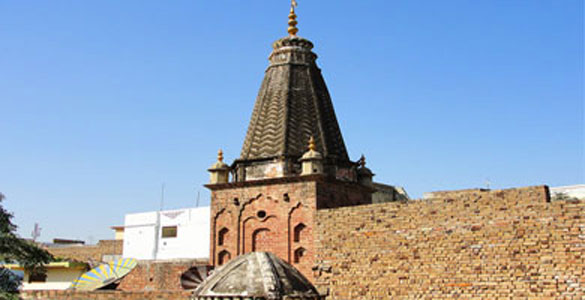 The Shikara (superstructure) of the temple is adorned with chevron lines symbolising ‘life’.

The second temple, known as Harri Mandir, is located in an area with the same name, Hari mohalla, now called mohalla Jamia Masjid. 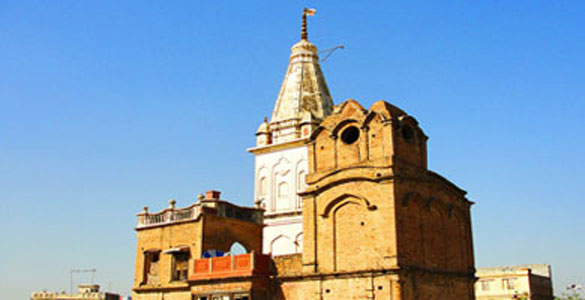 Photo: View of the Hari Mandir.

This haveli mandir is associated with the Hindu god Vishnu.

According to an inscription fixed just above the portico, the temple was built in memory of Bhagat Bishandas Vekanth by Swami Diyanand of the Sarswati Sabhapati Harri Mandir committee of Hazro in vikram sambat (Indian calendar) 1989 that is, circa 1928 A.D.

Harri Mandir is very large and spacious. The façade of the temple is decorated with jharokhas and balconies.

The main entrance gate is embellished with floral designs while the interior of the temple is adorned with paintings.

The mandir is connected to the haveli via a bridge from its eastern side. According to Sohail Dar, a local of Hazro I met when there, every room of the Harri Temple was bedecked with paintings which were later whitewashed by its occupants.

It is rather sad to look around Hazro and witness it's architectural heritage in ruins. The concerned authorities must take serious steps and designate some of the most important streets as part of a heritage area. This will help promote local tourism and pump up the Pakistani economy.

Governments in Europe, and even in some Asian countries are promoting a very successful model of city tourism. We, too, can do the same by preserving these monuments as tourism is no longer associated only with resorts and shopping malls, but has expanded to an overall experience of different ways of life, of which Hazro is a prime example.

Zulfiqar Ali Kalhoro is an anthropologist and teaches tourism, globalisation and development at the Pakistan Institute of Development Economics, Islamabad.