Arafa, The Day Before Eid Is the Day Human Rights Were Illustrated 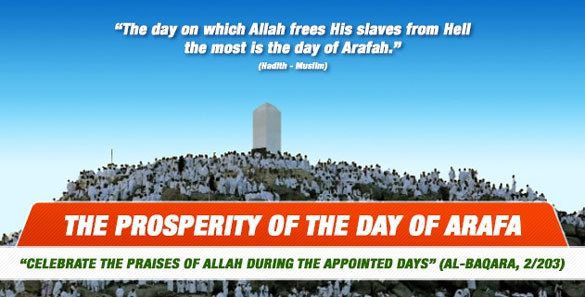 “This day I have perfected for your Din (Religion) for you, completed my favor upon you, and have chosen Islam for your religion” (5:3) Omar Bin al Khattab (A.S) says that a man from among the Jews said to him: “O leader of the believers: there is a verse in your book that you read, were it to have been revealed to us—the Jewish people—we would have taken that day as a holiday. He said: which verse? He said: Today I perfected your religion for you and I have accepted Islam as a religion for you. Omar said: we know that day and the place in which it was revealed to the Prophet (S.A.W) when he was standing at Arafa on a Friday”. So on that day the verse was revealed, two Muslim holidays coincided, Friday and the day of Arafa. One of the bounties with which Allah has favoured his slaves is that He created times, and made some of these times better than others, and also He created seasons for worship, so Muslims can correct their faults; purify themselves from sins and iniquities.

The Prophet Muhammad (S.A.W) has observed: “The day of Arafa is the best of all days in view of Allah. On this day, the Lord of the heavens especially turns His attention towards the world and expresses His pride before the Angels on the humility of His pilgrims.

Allah observes to the Angels: “O Angels look at my servants stand before me in the sun in a helpless state. They have gathered here from afar drawn them to this place, although they have not yet seen the agony of punishment”. After expressing His pride, Allah then ordains that these people have been granted salvation from the torments of hell.

On no other occasion are such a greater number of men granted salvation are on the day of Arafa. How great the day of Arafa and how virtuous and how tremendous and how beautiful? It is a day that Allah have distinguished from other days. The day of Arafa is one in which Allah grants His slaves forgiveness. Prophet Muhammad (S.A.W) was asked about the day of Arafa, He said: it blots out the iniquities for the passed and the coming year after it. Muslims should realize the virtue of this great day. In it, the Dua’ is answered, the sins are forgiven, and Allah is satisfied with his servants”

The day of Arafa is a day of forgiveness for the pilgrims who are present this day, as will for those who fast the day of Arafa all over the world. ‘Ayesha said the Prophet of Allah (S.A.W) said” “There is no other day on which Allah frees a larger number of his slaves from the fire of hell than the day of Arafa”.

“O People, lend me an attentive ear, for I know not whether after this year, I shall ever be amongst you again. Therefore, listen to what I am saying to you very carefully and take these words to those who could not be present here today. O People, just as you regard this month, this day, this city as Sacred, so regard the life and property of every Muslim as a sacred trust. Return the goods entrusted to you to their rightful owners. Hurt no one so that no one may hurt you. Remember that you will indeed meet your Lord, and that He will indeed reckon your deeds. ……..

……. O People, it is true that you have certain rights with regard to your women right but they also have rights over you. Remember that you have taken them as your wives only under Allah’s trust and with His permission. If they abide by your right then to them belongs the right to be fed and clothed in kindness. Do treat your women well and be kind to them for they are your partners and committed helpers. And it is your right that they do not make friends with any one of whom you do not approve, as well as never to be unchaste. ……

To conclude Muslims should celebrate the day of Arafa by holding themselves from committing sins and iniquities in order that Allah may forgive them. So the Muslims should prepare themselves for this day to observe remembrance and worship of Almighty.