Amid a Rise in Xenophobia in France, the Debate about Its Links to Migration and Islam Continues To Heat Up

President of the Arab World Institute Jack Lang participated in a heated debate with French essayist and journalist Eric Zemmour about the Arabic language and its link to Islam. 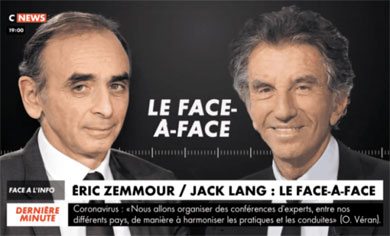 The debate was broadcast on television channel CNews on Tuesday, February 25.

Lang appeared on the show to introduce his recently-published book “The Arabic Language, Treasure of France.” The book explores the cultural value of the Arabic language in France.

On the other side of the set, Zemmour, known for his controversial statements about Arab culture, migration, and Islam, was also invited to give his opinion on the book and its theme.

Despite recognizing the “beauty of Arabic” and describing the language as “poetic,” Zemmour said that Arabic cannot be a language of science, because it has “an indestructible bond” with Islam, and the religion opposes all scientific thinking.

“What a mistake!” retorted Lang, explaining that linking Arabic to Islam is a “historical error.” The head of the Arab World Institute invited Zemmour to visit the ongoing exhibition “Al Oula” at the institute that traces the origins of the Arabic language.

“Arabic precedes Islam by centuries,” he continued, saying that “political agendas are behind the association of Arabic to Islam.”

“When you say that the Arabic language is foreign to science, you leave me astonished,” protested Lang.

A significant part of ancient knowledge was translated into Arabic, said Lang. However, Zemmour disputed the historical fact, because “it was Christians conquered by Arabs who translated the Greek texts.”

Arabs indeed translated mathematics, astronomy, and medicine, affirms Zemmour. However, according to the essayist, Arabs never translated philosophical texts because “they would contest the Quran and God.”

Outraged by the switch of topic from language to religion, Lang threatened to leave the set.

“Tell the producer to end the show,” he angrily said to the host before turning towards Zemmour: “We’re here to talk about a book. Your fanaticism prevails over everything. Your obscurantism dominates truth and reason.”

The heated debate continued for a few more minutes until Zemmour accused Lang of being an “idiot who wants to re-Arabize and re-Islamize” France.

“You are the agent of Islamization! You want to leave the learning of Arabic in the hands of propagandists and manipulators while I want language teaching to be done inside schools,” lashed out Lang in response to the accusation.

Lang, who is a former Minister of Culture, published his new book on February 13. The publication aims to defend the status of the Arabic language in France amid a raging national debate about Islamism and migration.

Zemmour is known for his right-wing stances against migrants and Muslims in France. He started his journalism career in 1986 and worked as a reporter for several publications, including Le Figaro. Since 2011, Zemmour has hosted a weekly talk show on national television.

Earlier this month, the essayist argued that Muslims who name their children Mohammed, the name of Islam’s prophet, or wear the veil are engaging in self-discrimination.

Original Headline: Debate on Role of Arabic Language, Islam Rages On in France