On May 30, 2019, Mohamed Abdulrahman Ahmed should have been in class preparing for exams. Instead, neighbours found the gifted high school senior hanging lifeless from a beam in his home in the Dadaab refugee camp in northeastern Kenya. He had taken his own life.

A sea of sand and thorn scrub and makeshift tarpaulin dwellings, Dadaab is home to more than 200,000 people — a city the size of Richmond, Va., or Spokane, Wash., except without electricity or running water. The camp was established in 1992, a year after neighboring Somalia collapsed into civil war and refugees streamed into Kenya.

Twenty-nine years later, the mostly Somali residents of Dadaab, now including second- and third-generation refugees, are forbidden to work formal jobs or to find homes outside the camp. They cannot even construct permanent dwellings, since doing so would run counter to the camp’s official status as temporary.

Mr. Ahmed, who was 26, had grown up in Dadaab and dreamed of finding a way out through education. He had been a star student, especially in the younger grades, and his classmates called him Qaddafi — not because he had any of the Libyan strongman Muammar el-Qaddafi’s traits but because he had been their elected student leader long enough to be a Middle Eastern despot.

Over the years, refugees in Dadaab have clung to one hope: resettlement overseas, sometimes in Europe or Canada but mostly in the United States. Tens of thousands of Dadaab’s residents have come to the United States; in 2015, for instance, more than 3,000 people from the camp were resettled there.

Those hopes of a better life were dashed on Jan. 27, 2017, when on his eighth day as president, Donald Trump suspended all refugee admissions and banned entry to citizens of seven Muslim-majority countries, including Somalia. (Restrictions were eventually applied to 13 countries in all.)

The travel ban all but slammed shut the gates of the United States, which has accepted roughly three million of the more than four million refugees resettled anywhere in the last four decades.

When Mr. Trump’s ban went into effect, about 14,000 of Dadaab’s 200,000 residents were at some stage of the process to come to America. A mere eight refugees from Dadaab were resettled in the United States in 2018 and 14 in 2019. Even refugees with life-threatening illnesses were denied travel authorization to seek care in U.S. hospitals.

Although refugee admissions resumed in February 2017 after a federal judge suspended parts of Mr. Trump’s executive order, the resettlement pipeline from the countries affected by the travel ban remains mostly blocked. 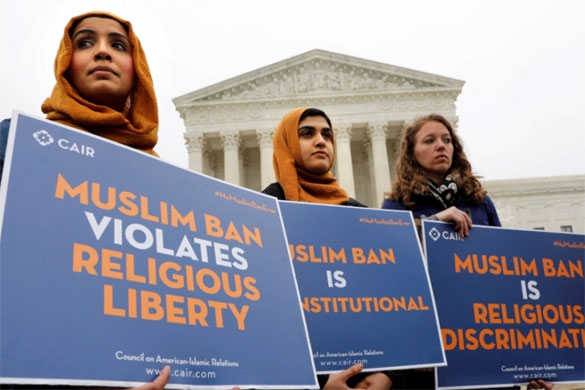 President-elect Joe Biden has vowed to overturn the so-called Muslim ban on 'day one' of his administration [File: Yuri Gripas/Reuters]

In the fiscal year that ended on Sept. 30, the United States welcomed just 11,814 refugees, compared with 85,000 in 2016, the last year of the Obama administration, and the lowest since the modern U.S. resettlement scheme was created in 1980.

When I travelled to Dadaab in June 2019, the pall cast by Mr. Trump’s refugee policies was inescapable. Everywhere I went, people told me how they or their loved ones had given up on ever being resettled. They were either steeling themselves to spend the rest of their lives in Dadaab or weighing the possibility of going back to Somalia.

“Since Trump, resettlement is over,” Elias Ndonga, the principal at Mr. Ahmed’s school, told me. “The refugees have nowhere to go now. No resettlement, no work.”

In the Kakuma refugee camp near Kenya’s western border, which houses roughly a quarter of a million mainly South Sudanese refugees, nine refugees took their own lives in 16 months after the travel ban. The spate of suicides so unnerved aid workers there that they reportedly began confiscating wire, battery acid and other potentially deadly objects.

With the link to the United States all but severed, the few alternative routes out of refugee camps like Kakuma and Dadaab became even more important. For Mr. Ahmad, the Trump ban meant striving for an academic scholarship to study in Canada.

People who knew him said Mr. Ahmed worked feverishly in pursuit of his goal. His parents had returned to Somalia but he had stayed behind in the camp to repeat his final year of high school to better his exam score. The year before, Mr. Ahmed had scored poorly on the national high school exam, far below his expectations. He lived alone and dedicated nearly every waking hour to his studies.

Mr. Ndonga, the principal, said that Mr. Ahmed often reported to school as early as 5:30 a.m. and didn’t leave until late in the evening. Ramadan Ibrahim, a business manager at the school, told me, “Most of the time, he talked about resettlement, about leaving the camp for a better life.” When a Canadian scholarship did not materialize, Mr. Ahmed ended his life, speaking of falling short of his aspirations in a suicide note.

In one of his earliest actions in office, President Biden rescinded the Trump travel ban. During his campaign, he promised to lift the cap on refugee admissions from 15,000 to 125,000, seeking to raise it over time “commensurate with our responsibility and values.”

Keeping that promise would be a vital first step toward restoring the United States to its role as a leader in refugee resettlement, but Mr. Trump’s life-altering legacy will reverberate for generations of refugees. Repairing the damage to the refugee admissions program may take years.

Truly living up to our responsibilities and values would mean significantly scaling up refugee resettlement and rallying the 40 or so richest countries in the world to do the same — so that a fourth and fifth generation of refugees are not born in places like Dadaab. Such an effort would come too late for Mr. Ahmed, whose bright star fizzled out during America’s hour of darkness. But for others like him it would restore a flicker of hope.

Original Headline: The ‘Muslim Ban’ Is Over. The Harm Lives On