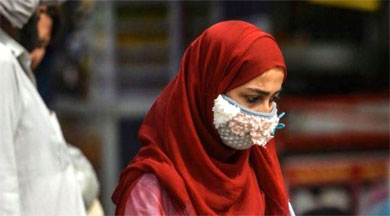 Amidst the global media’s relentless news coverage of the Coronavirus pandemic, a number of media outlets have emerged with questionable output, seemingly making implicit and explicit connections between the spread of the virus and individuals who are visibly Muslim.

In response to U.S. President Donal Trump’s ban on travellers from the EU, the New York Times conspicuously accompanied their front-page reporting on this with photos of mosques from the infamously non-EU, and only partly European city of Istanbul. The Spectator and BBC news also utilised photos of visibly Muslim women in their articles on the pandemic.

Given the lack of hijab-wearing voices within the mainstream media, this sudden surge of representation was all the more questionable. Most controversially, The Economist published a now deleted story that was entitled, “The arrival of covid-19 was expected. The spread of radical Islam has been more of a surprise”.

Another loosely related incident arose when the BBC invited former UKIP leader Nigel Farage onto Newsnight to talk about the virus.

While there might not initially appear to be a connection between pathogen pandemics and Muslims, or the expertise of an individual who has built a career around xenophobia and the expertise required to discuss viruses, two scientific theories can highlight connections between them.

A raft of group level differences are found regarding these traits, for example, when comparing political groupings of Right and Left wing. Typically, left leaning individuals score highly on caring and fairness, but low on the others, while those with right wing tendencies score highly across all five.

Situating MFT across this plane can help us understand why conservatives tend to be less welcoming of outsiders; the importance they place on in-group loyalty, and respect for tradition and culture can temper the care they express towards others in a way that is less typically seen among liberals. The most relevant moral value to this discussion is purity.

Purity, which is also referred to as sanctity, is believed to have evolved specifically to defend communities from pathogens. It is also associated with drives to maintain community sanctity from outside pollution and protection from harmful microbes and parasites, but also fuels concepts such as taboo. It is one explanatory variable in understanding why resistance to outgroup members can be so aggressive, and phenomena such as xenophobia and racism can prove to be virulent.

Essentially, the reaction to people deemed to be “outsiders” can be governed by repulsiveness to foreignness, akin to the reaction stirred when the sanctity of one’s own body is violated by a foreign pathogen.

‘Parasitic-Stress Theory’ (PST) posits that pathogenic threat greatly shapes many aspects of a society and the way in which its members interact with one another. Significantly, in-groups that develop stricter norms and more prominent values reduce pathogenic transmission, in-part because they are more likely to maintain strong relations with in-group members, while avoiding outsiders.

When one reflects on the marriage of PST, and the moral value of purity/sanctity, the potential impact that the Coronavirus might have on social cognition and behaviour becomes apparent. It also might explain why stories pertaining to the coronavirus pandemic might have triggered the use of images of Muslims by media outlets; the value of purity could see both the Coronavirus and Muslims as a foreign threat, amongst those with salient or latent, conscious or unconscious, Islamophobia.

To unequivocally claim that an editorial decision was made to marry the two would be controversial. Less controversially, it could be suggested that an subconscious process took place amongst decision makers within these media outlets, softened by years of relentless and pointed media messaging, ever framing Muslims and Islam as foreign, threatening and parasitic; Islamophobia by osmosis.

Indeed, Noam Chomsky is one of those who propose individuals working in the media go through a self-censorship process, wherein they adopt desirable positions that allow them to progress within the field. Where this becomes even more problematic is when we consider the reinforcing potential for the consumers of these media images; the bias within the newsroom will be streamed out into the wider world, impacting on all who consume these stimuli.

These connections are infamous precursors to acts of genocide, and indeed, featured in the years that preceded the Holocaust, and the genocide of Bosniak Muslims. Painting the other in terms of vermin is a feature of the dehumanisation phase of this tragic process. In the shorter and more immediate term, it can play a role in the already burgeoning rates of incidence of Islamophobia and anti-Muslim bigotry.

The likelihood that the Coronavirus pandemic will increase outgroup hostility seems strong. As well as processes such as the extenuation of xenophobia in times of economic decline and resource scarcity, MFT and PST inform values such as sanctity being made salient can lead to troublesome times for outgroups.

The imagery being used by prominent mainstream media outlets is indicative of the readiness of significant voices to connect their fear of the virus with their fear, suspicion or dislike of the Muslim other, knowingly or unknowingly.

The messaging employed by the media outlets mentioned in this piece reflects a more explicit and indisputably conscious connection being pushed in relation to Islam, Muslims and virulence. Given the increasing rise of Islamophobia, antisemitism, and other variants of out-group hatred, these insights do not bode well for religious and ethnic minorities in the west.

Original; Some western media outlets could not resist linking COVID-19 to Islam and Muslims