Tony Blair, ‘The Trouble within Islam,’ and Kumbaya in Kosovo

On Monday, June 10, former British Prime Minister Tony Blair released a thoughtful memorandum that was quickly reproduced on websites around the world. Titled “The Trouble Within Islam,” Blair’s reflections were stimulated by the resurgence of Islamist terror in Britain, where a serviceman, Lee Rigby, was brutally murdered on May 22 by two jihadists. Blair’s remarks also seemed to reflect the shock of the Boston bombing of April 15.

Blair stipulated in his message that Islam as a religion is not to blame for such atrocities, and that most Muslims living in Britain were “horrified at Rigby’s murder.” Nevertheless, according to Blair, a dangerous ideology has spread wide in Muslim ranks, and “we are deluding ourselves if we believe that we can protect the United Kingdom simply by what we do at home. The ideology is out there. It is not diminishing.” 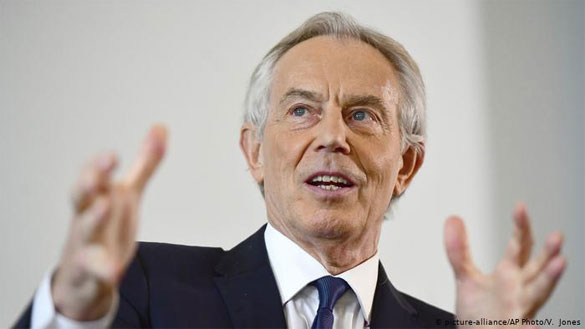 The former British prime minister went on to warn, “Syria now is in a state of accelerating disintegration. President Bashar al-Assad is brutally pulverizing entire communities that are hostile to his regime.” He noted, “The West’s overwhelming desire to stay out of [Syria] is completely understandable. But we must also understand that we are at the beginning of this tragedy. Its capacity to destabilize the region is clear.”

In a further review of challenges in the Middle East and beyond, Blair touched on the spill over of the Syrian catastrophe into Jordan and Lebanon, the intrusion of Hezbollah, the intrigues of Iran, the revival of al Qaeda in Iraq, the rise of the Muslim Brotherhood in North Africa, the eruption of radicalism in Mali, and crises from Yemen through Pakistan to Burma and the Philippines.

Blair’s conclusion is long overdue: “There is a problem within Islam, and we have to put it on the table and be honest about it. There are, of course, Christian extremists and Jewish, Buddhist, and Hindu ones. But I am afraid that the problematic strain within Islam is not the province of a few extremists.”

Regardless of his perception of Islamist doctrines, however, Blair has failed to propose an adequate response to them.

He concluded his June 10 musings by stating that peace and security are insufficient, and that his nonprofit organization, the Tony Blair Faith Foundation, has the “specific purpose . . . to educate children of different faiths around the world to learn about each other and live with each other.”

One could suggest cynically that appeals focusing on “the children” are very old news in humanitarian circles, and are seldom known for success. In many societies plagued with Islamist extremism, Muslim kids play with kids from other religious confessions but then are driven away from them when they grow up, attend universities, enter professions, and come into contact with fanatical preachers.

How does the Tony Blair Faith Foundation endeavour to change this pattern? In the ex-Yugoslav republic of Kosovo, “A Week of Tolerance and Reconciliation” was sponsored by the Blair Foundation, the United Nations Development Program, British and Norwegian diplomats, and the Kosovo government, along with two more NGOs, Soul of Europe and the Balkan Institute. It culminated in a May 24-26 conference with the grandiose title “Faith and Reconciliation: What is the Future of Interfaith Dialogue?”

The conclave, held in the northern Kosovo city of Pec, attracted 100 or so participants from a stunning variety of worldwide religious communities, including Al Haj Aye U Lwin of the Burmese Muslims, Robert Eisen, a professor of Judaic studies at George Washington University, and Abdulqahir Muhammad Quamar, an expert in Islamic law from Saudi Arabia. The Kosovo police, according to local media, took special measures to protect the gathering. In a sea of diverse religious costumes, perhaps the most notable was the purple cassock of Archbishop Malkhaz Songulashvili, primate of the Evangelical Baptist Church of Georgia. Within the small country in the Caucasus where his church is active, Baptists are a tiny minority, representing less than 1 percent of the population, which is made up overwhelmingly of Orthodox Christians.

But what did the religious encounter sponsored in Kosovo by the Blair Foundation achieve? The event itself was strictly “kumbaya”—the kind of symbolic fellowship celebrated in the famous campfire tune. It managed to get representatives of the most notorious religious adversaries in Kosovo—the Serbian Orthodox Church and the official Sunni Islamic Community of Kosovo—to sit in the same room, along with figures from the Albanian Catholic church, the main non-Muslim Albanian religious minority in Kosovo. But is cool, or even sociable, proximity, under the ever-present gaze of foreign administrators in Kosovo, enough to constitute dialogue?

Participants in the Kosovo conference avoided studiously the real issues that are discussed in the streets of the country, instead addressing such anodyne topics as the transcendence of God, the expansion of social media, and faith in secular societies. Meanwhile, the matters stirring the people around them include the infiltration of radicalism into the highest level of the Kosovo Islamic apparatus, as represented by one of the most prominent, if laconic participants in the conference, the pro-Wahhabi, Muslim-Brotherhood-affiliated chief cleric of Kosovo, Naim Ternava. As the conference opened, Kosovo’s newspaper of record, Koha Ditore (Daily Times), reported on May 23 that Ternava has applied for status as a veteran of the Kosovo Liberation Army (KLA), although he did not fire a shot in the 1998-99 Kosovo combat. In addition, the faultlessly moderate chief cleric in Kosovo at that time, Rexhep Boja, warned Islamic clerics against becoming involved in the military insurrection.

Ternava and his current assistant, chief imam Sabri Bajgora, have submitted documentation claiming recognition as “KLA veterans” based on their work organizing food and sanitary assistance for refugees. Ternava declared that he reported, during the war, to former KLA general staff chief Sylejman Selimi, currently Kosovo ambassador to Albania, and another former KLA commander, Sami Lushtaku, mayor of the city of Skenderaj. On June 1, the European Union Rule of Law Mission in Kosovo (EULEX) reported the arrest of Selimi, Lushtaku, and five more former KLA members for alleged war crimes.

Another local concern involves the undiluted dedication of Serbian Orthodox clerics to the claim that Kosovo is part of Serbia. Kosovo has attempted to reach an agreement with Serbia on its northern border, where Serbian “parallel” police and political elements claim authority. Yet as the conference in Pec came to a hospitable end, Kosovars learned that their president, Atifete Jahjaga, had been excluded from a regional meeting of heads of state in Ohrid, Macedonia, even though the Macedonian government recognizes Kosovo. Kosovo’s attempts at good-faith negotiations with its Slavic neighbours seem doomed, notwithstanding rhetorical claims of compromise.

One hesitates to discount the good will of an individual like Blair, who so whole-heartedly pledges to educate the young people of the world in respect for their neighbours belonging to other religions and ethnic groups. But neither, indoctrination of children in tolerance nor formalistic chat sessions between religious officials from mutually antagonistic congregations and nations can accomplish the lofty aims embraced by Blair.

He is quite right to say “There is a problem within Islam, and we have to put it on the table and be honest about it.” Still, it leaves the table bare, and shows no honesty, to imagine that such issues will be resolved by polite colloquies on social media or related trivial topics. Blair is correct in that the problem of radical Islam is undeniable and must be dealt with openly. That would require, in Kosovo, asking about the infiltration of radicals, as well as the continued pretext for Islamist provocation furnished by disruptive Serbian Orthodox agitators. It is good to admit that radical Islam represents a significant ideological menace; it is better to call it by its name, and support its Muslim opponents articulately and publicly.