British Prime Minister Boris Johnson has vowed to toughen sentencing guidelines for convicted terrorists after a newly-released prisoner carried out a jihadist attack in London. 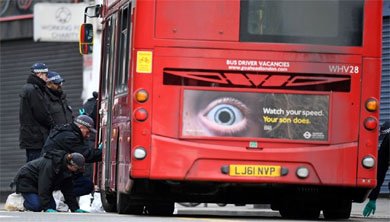 British Prime Minister Boris Johnson has vowed to toughen sentencing guidelines for convicted terrorists after a newly-released prisoner carried out a jihadist attack in London. Pictured: Police officers search for evidence at the scene of Sudesh Amman's terror attack in London, on February 3, 2020. (Photo by Daniel Leal-Olivas/AFP via Getty Images)

On February 2, Sudesh Amman, a 20-year-old jihadist from Harrow in north-west London, stabbed two people in a knife rampage on Streatham High Road before he was shot dead by police. He had been released from prison just days earlier after serving less than half of his sentence for terrorism offenses.

Amman, who was carrying a 10-inch kitchen knife, wearing a fake suicide bomber vest, and shouting "Allahu Akbar" ("Allah is the Greatest"), had been under active police surveillance at the time of the attack, which London police described as an "Islamist-related terrorist incident."

In December 2018, Amman was sentenced to three years and four months in prison after pleading guilty to 13 counts of expressing support for Islamist terrorism and possessing and sharing Islamic State and al-Qaeda propaganda. He was 18 years old at the time.

Amman was arrested in May 2018 after posting Islamist propaganda online. At the time, police said that he had expressed support for the Islamic State, sent beheading videos to his girlfriend, and asked her to kill her "kuffar" (non-Muslim) parents. He also wrote about carrying out a jihadist attack:

"If you can't make a bomb because family, friends or spies are watching or suspecting you, take a knife, Molotov [cocktail], sound bombs or a car at night and attack the crusaders, police and soldiers of taghut [idolatry], or western embassies in every country you are in this planet."

In a search of Amman's computer, police found documents titled, "How to Make a Bomb in the Kitchen of Your Mom", "U.S. Army Knife Fighting Manual Techniques" and "Bloody Brazilian Knife Fighting Techniques."

During Amman's trial, police noted that he had a "fierce interest in violence and martyrdom." Acting Commander Alexis Boon, then head of the Metropolitan police counter terrorism command, explained:

"His fascination with dying in the name of terrorism was clear in a notepad we recovered from his home. Amman had scrawled his 'life goals' in the notepad and top of the list, above family activities, was dying a martyr and going to 'Jannah' — the afterlife."

"It's not clear how Amman became radicalized, but it is apparent from his messages that it had been at least a year in development. Whatever the circumstances, this case is a reminder of the need to be vigilant to signs of radicalization and report it."

Amman's attack is the second one in the British capital in the past three months. On November 29, 2019, Usman Khan, a 28-year-old jihadist from Stoke-on-Trent, stabbed and killed two people in a knife rampage near London Bridge. Like Amman, Khan had also been released early from prison.

A day after Khan's attack, Boris Johnson announced a review into the license (parole) conditions of 74 terrorists who had been released from prison early. He also vowed to end the practice of automatically releasing serious offenders from prison before the end of their terms:

"The terrorist who attacked yesterday was sentenced 11 years ago under laws passed in 2008 which established automatic early release.

"This system has got to end. I repeat, this has got to end.... If you are convicted of a serious terrorist offense, there should be a mandatory minimum sentence of 14 years — and some should never be released.

"Further, for all terrorism and extremist offenses, the sentence announced by the judge must be the time actually served — these criminals must serve every day of their sentence, with no exceptions."

A Sentencing Bill included in the Queen's Speech in October 2019 would have changed the automatic release point from halfway to two-thirds for adult offenders serving sentences of four years or more for serious violence or sexual offenses. The bill, however, stalled due to a hung parliament, and was shelved later that month when new elections were called.

The latest attack sparked considerable anger. In an interview with Sky News, the editor of Spiked magazine, Brendan O'Neill, spoke for many when he said:

"The Streatham terror stabbing is a scandal. This man was an Islamist maniac. He was devoted to ISIS and he had planned to kill non-believers. And yet he was let out of jail after just 18 months. We've got to start taking Islamic terrorism more seriously."

"We need an immediate moratorium on the release of terrorist prisoners, whilst the government reviews each individual case."

In an interview with the Daily Mail, an unidentified government source said that according to British law, Amman had to be released from prison early, despite the threat he posed to society:

"There had been concerns when he [Amman] was in prison but there were no powers for any authority to keep him behind bars.

"There was nothing that could be done to keep him behind bars under existing laws, hence why he was under surveillance and strict licensing conditions.

"He had served half of his sentence, which was more than three years, so he had to be released despite concerns over his conduct.

"The public will look at this case and say why was this individual not kept behind bars and the Prime Minister shares that view."

After the latest attack, Johnson promised "fundamental changes" to the system for dealing with convicted terrorists. He said that terrorists currently in prison will lose their right to automatic early release halfway through their sentences. Johnson stressed that the legal concept of automatic early release for people "who obviously continue to pose a threat to the public has come to the end of its useful life."

On February 3, Secretary of State for Justice Robert Buckland announced that the government would introduce emergency legislation — The Counterterrorism Bill — to end the automatic early release from prison of terror offenders:

"We cannot have the situation, as we saw tragically in yesterday's case, where an offender — a known risk to innocent members of the public — is released early by automatic process of law without any oversight by the Parole Board.

"We will, therefore, introduce emergency legislation to ensure an end to terrorist offenders getting released automatically having served half of their sentence with no check or review."

Buckland added that the changes would be retroactive and apply to jihadists currently in prison:

"We face an unprecedented situation of severe gravity and, as such, it demands that the government responds immediately and that this legislation will therefore also apply to serving prisoners.

"The earliest point at which the offenders will now be considered for release will be once they have served two-thirds of their sentence and, crucially, we will introduce a requirement that no terrorist offender will be released before the end of their full custodial term unless the Parole Board agrees."

A total of 353 convicted and suspected Islamist terrorists were released from prison between June 2012 and June 2019, according to Home Office statistics cited by the Daily Mail.

In October 2018, the Islamist firebrand preacher Anjem Choudary, described as Britain's "most dangerous extremist," was released from prison after serving only half of the five-and-a-half-year sentence he received in 2016 for pledging allegiance to the Islamic State.

Prison authorities could not prevent his release: under British sentencing guidelines, prisoners — even those who are still a risk to the public — automatically become eligible for release under license (parole) after serving half their terms.

In an essay published by the Daily Mail, Philip Flower, a former chief superintendent with the Metropolitan Police, warned that the fight against violent Islamism in Britain was being hampered by political correctness:

"As a retired senior police officer involved in containing terrorist and other threats during a 40-year career, I want to tell you of the intense frustrations that will be felt today across British policing. They will feel utterly let down by the judicial system.

"When I was a constable, I could arrest and process a suspect in an hour, maximum. Today, it takes a day or more.

"The police are mired in bureaucracy, while the judicial system has become an institutional cloud-cuckoo land.

"As a society, we have to decide how to deal with terrorist suspects. It takes around 32 police officers to maintain around-the-clock surveillance of a single terror suspect.

"It is insane to attempt to maintain this level of supervision of the thousands of individuals known to be of interest to the security services and counter-terrorism police. It seems as though the Streatham perpetrator was being watched by armed police, yet still he managed to stab shoppers....

If we are to release convicted terrorists from jail early, then we would have to recruit thousands and thousands more police to oversee them, which of course will never happen because there is not enough money and we would find that level of intrusion unacceptable in a free society.

"There is a wider problem of maintaining the morale of the officers charged with keeping the public safe from fanatics.

"Bluntly, how would you feel if you were told to keep track of known terrorists who have been released from prison to satisfy the politically correct assumptions of our justice system?"

Ian Acheson, a veteran prison officer who in 2015 led an independent review of Islamist extremism in British prisons, told the BBC's Today program that the UK's risk-management system is fundamentally broken:

"We are going to have to accept that we have to be much more skeptical and robust about dealing with the risk of harm.

"We may need to accept that there are certain people who are so dangerous they must be kept in prison indefinitely....

"I am still unconvinced that the prison service itself has the aptitude or the attitude to assertively manage terrorist offenders."

Soeren Kern is a Senior Fellow at the New York-based Gatestone Institute.

Original Headline: UK: Why Are Dangerous Jihadists Being Released Early from Prison?