Walking the Islamic Path as A Family Has Its Challenges, But with Hardship Comes Ease, Alhamdulillah;This I Put My Faith In

Four years ago, I gave birth to my first child, with just enough time to settle into motherhood before Donald Trump became President-elect. Though I was raised with a pretty fundamental version of Christianity in the Midwest, upon marrying my husband, I have taken on his spiritual upbringing of Islamic Sufism. So we consider ourselves a Muslim family, and plan on raising our son with the belief that God is One, and Mohammed (as well as Jesus) PBH, is our Prophet. 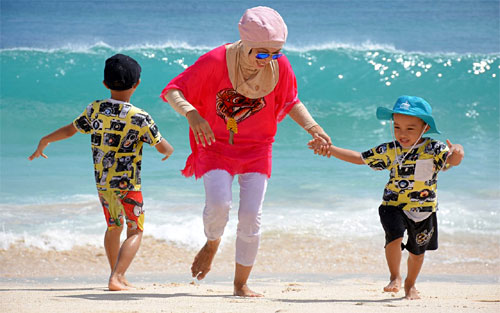 It hasn’t really been that dramatic a shift in my belief system, nor may you know we are Muslim unless asked (I haven’t started wearing a headscarf for example, nor do we attend a mosque). Regardless, we now fit into that really big, feared, and stereotyped category of “Muslim” in the United States. Here are just a few of the responses I’ve got when I tell people I’m raising my son Muslim.

Apparent Uncomfortableness. . . Because Lack of Exposure

When I married my husband and told co-workers that we would be having an Imam perform our wedding ceremony, I will never forget one of my co-worker’s responses. Though he was seemingly liberal, and raised in a cosmopolitan environment, all he could say was, “So are you going to wear a hijab now?” All I could think was, “Really? Really? So it’s going to be like that?”.

Not every Muslim woman wears a hijab, nor is somehow less of a feminist because of becoming Muslim. Look up Mohammed’s first wife, Khadija, if you want to read about a woman that modern-day feminism could take a lesson from.

Sometimes the coin is flipped. I’ve had the most surprising people support my decision to marry my husband and raise my child Muslim. Some unexpected allies include my late grandfather who all his life had been staunchly Republican, my next-door neighbors who as a Peruvian-black couple understand what it is to be an anomaly too; and my sister’s Quaker family who is as far left on the Christianity spectrum as we are on the Muslim one.

The other day while walking in the neighbourhood, I saw a sign next to a Black Lives Matter sign that said, “I Love My Muslim Neighbour.” Though just a sign, it made me smile. Thankfully, more often than not, we have been met with love.

. . . But Some Family Members Have a Hard Time

That is, because of certain things which I believe are more cultural than religious. My dear mother, bless her heart (and really do bless it, because she has, on a whole, been greatly supportive), cannot get over us not being at Christmas. It’s hard for me, too. Not because I miss the holiday per se, but because I know how she misses us. I can literally feel it from a few hundred miles away.

So we try and focus on getting the family together at other meaningful times. Thanksgiving is big for us, and we like weekends together where we can just hang out. We’re redefining what it all means to be a family, but then again, what family isn’t?

Those We Have Not Yet Met (And Perhaps Care Not To)

Though I currently live in a very diverse place with friends from all walks of life, I was raised in a rural place where Tea Party (extremely conservative) support was not far fetched. So believe me, I know those people. The ones who believe my husband may be a terrorist because he was raised in an Arabic speaking country, or that we are all going to hell because we don’t believe in Jesus Christ (in that way).

But who am I to start putting fences up? If I subscribe to the same rhetoric of “us” versus “them”, then I am also minimized. I still believe if people can meet one another face to face, then the humanity in all of us can be seen. At least, I hope.

What Will Be Will Be

One of the biggest tenants—okay the very essence of Islam—is submission. What does that mean? It means that we have to have faith in God that all is in right and divine order. So though the idea of a President Trump and his divided world scares me to shivers, I am called to trust the God that I believe in that there is a reason, there is a plan.

My job, for myself, and for my family, is to work for love, and believe that love will prevail. Walking the Islamic path as a family may have its challenges, but without a doubt, with hardship comes ease, Alhamdulillah. This I put my faith in.

Original Headline: A Revert’s Story: What People Say When I Tell Them I’m Raising My Son Muslim