Incendiary ads calling Muslims ‘savage’ hit the billboards in the last week of September, just as protests against the anti-Islamic ‘Innocence of Muslims’ video in the Middle East were reaching their peak. If the idea was to needle American-Muslims―who had remained quiet during the video controversy―into burning the American flag and pelting stones on the streets, and give the clueless Romney a debating point, the sponsors of the ads couldn’t have chosen a more opportune moment. Yet, they failed. The pot just couldn’t be stirred. The savages just couldn’t be provoked. 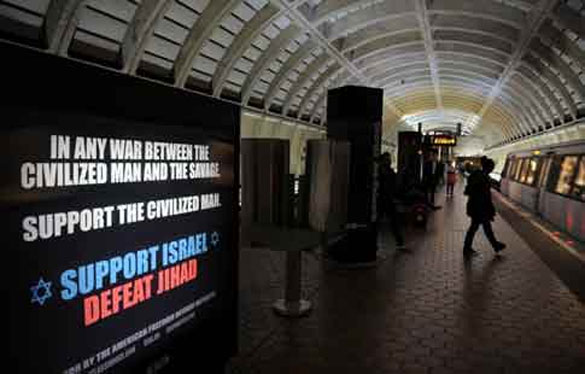 In politics, as in cricket, timing is everything. And right-wing blogger Pamela Geller’s American Freedom Defense Initiative (AFDI), which put up these “advertisements” inside New York and Washington, DC subway stations, got theirs perfectly right.

The incendiary ads, calling Muslims “savage”, hit the billboards in the last week of September, just as protests against the anti-Islamic ‘Innocence of Muslims’ video were raging around the Middle East and some other countries and reaching their peak. Moreover, the first presidential debate between President Barack Obama and his Republican rival Mitt Romney was due in a little over a week.

If the idea was to needle American-Muslims―who had remained quiet all through the video controversy―into burning the American flag and pelting stones on the streets, and give the clueless Romney a debating point, they couldn’t have chosen a more opportune moment.

During the ‘Innocence of Muslims’ controversy, I wrote that by protesting violently and killing people, Muslims ended up showing themselves to be the bloodthirsty savages they were accused of being. Their response to a similar incitement in the United States has been a lot more “civilized”―and a lot more effective.

No violent demonstrations or protest. Not even a peaceful rally or a sit-in to criticize the ads. Instead, a number of Muslims have turned to Twitter to take on Geller and the AFDI, and are posting messages on #MySubwayAd. And even here, the messages are not hateful condemnations of Geller or America or the West or even Israel―as online message boards sometimes tend to be―but mostly talk of peace, love and forgiveness.

The Council on American-Islamic Relations (CAIR), which started #MySubwayAd, has also launched a counter-ad campaign. It show a smiling Muslim woman and a verse from the Quran: “Show forgiveness, speak for justice, ignore the ignorant.”

A number of Christian and Jewish organisations have closed ranks with CAIR and are also posting on  #MySubwayAd. Some are even spending money on their own ad campaigns, too.

United Methodist Women, a Christian group, has put up its own ads―some of them right next to the AFDI ad, reading: “Hate speech is not civilized. Support peace in word and deed.”

Rabbis for Human Rights―North America’s ad reads: “In the choice between love and hate, choose love. Help stop bigotry against our Muslim neighbours.”

Rabbi Jill Jacobs, executive director of Rabbis for Human Rights, told The New York Times: “(Pamela) Geller thinks she is speaking for the entire Jewish community. We are a group of 1,800 rabbis and we want everyone to know that we have to work in partnership with the Muslim community and do not believe in dehumanising them.”

Similar sentiments are being expressed by commuters who use these subway stations. Many Christians and Jews have stood next to the AFDI ads holding placards bearing messages of peace, got themselves photographed and posted them on Facebook.

Never-say-die Geller is not going to leave it at that. She has started another hashtag―an unsurprising #savage―to fight the “war” on Twitter. She has also unveiled a still more incendiary ad campaign that will show images of the burning Twin Towers with “jihadi” verses from the Quran―in a bid to link Islam with terrorism. She even invited her blog readers to pick out verses that would suit her campaign. The first of these ads would quote the Quran as saying: “Soon shall We cast terror into the hearts of the Unbelievers.”

This, she threatened in her blog, could be an open-ended campaign that “would go on forever”.

But behind her flashy billboards and their in-your-face messages, there is a more significant subtext to this story. It is the almost complete absence of Islam as an issue―any kind of issue―during the ongoing presidential election campaign.

Two elections ago in 2004, with the memory of the 9/11 terrorist attacks fresh in people’s minds and the United States engaged in two wars in the Muslim world, Islam was easily the biggest issue as George W. Bush bid to be re-elected. The last time around, with both the Afghanistan and Iraq wars still raging and candidate Barack Hussein Obama being accused of being a Muslim, Islam was still on the radar as one of the big issues, even if not the biggest.

All that has changed in the last four years. A number of fresh controversies involving Islam and placing America’s relations with the Muslim world under the scanner have emerged under Obama―from the Ground Zero mosque debate a couple of years ago to the more recent anti-video protests. Still, the word “Islam” is hardly mentioned by either candidate or their campaign strategists.

Recent weeks have given a telling example. The Romney campaign has charged Obama with avoiding the word “terrorism” to describe the attack that killed the US ambassador to Libya and three other embassy employees last month―a charge that Obama denies. Whether the killers were terrorist or anti-video protesters, they were almost certainly Muslims. And yet, the discussion has been limited to the word “terrorism” as both sides have avoided calling it “Islamic”. This is in sharp contrast from the Bush years, when nobody ever said terrorism without adding Islamic before it.

Similarly, the debates surrounding the US role in the Arab Spring, Iran’s nuclear program and Obama’s supposed “coldness” towards Israel can all be framed in Islamophobic terms. Yet, the mainstream media as well as the two presidential campaigns, while engaging constantly in these issues, have kept Islam out of the picture.

It is not easy to analyse why something is not an issue―as opposed to why something is. But the wider American public’s growing distaste for Islamophobia is clearly a big reason. This distaste explains why the Tea Party―the extreme right wing of the Republican party―performed so poorly in the Republican primaries. It explains why Romney, who knows he could do with more votes from extreme right wing Republicans, still avoids framing even terrorism in “Islamic” terms. And it explains why chauvinists such as Geller, who are not just dedicated Islamophobes but also dedicated racists and Obama-haters―are so desperate to provoke Muslims and reinvent Islamophobia in time for the vote.

All of America is facing concerns about economic growth, housing and unemployment. History has shown that such times are particularly conducive for racial and religious bigotry―for creating an “enemy” and blaming them for your troubles. That makes the decline in Islamophobic attitudes all the more remarkable. And that makes American-Muslims’ sane, positive response to the provocative ads all the more welcome and worthy of emulation. Timing, as in cricket, is everything.