Muslim Women Know How To Challenge The Dominant Islamic Discourse To Confront It With Political Islam - Cartoons? The Hell With Them

Abdoullakh Anzorov and Samuel Paty were destined to meet from the moment the Chechen immigrant set foot on French soil: immigrant and native-born, religious and secular, foreigner and Frenchman. It’s just that the encounter wasn’t supposed to be so fatal and suicidal. On October 16, the 18-year-old Anzorov, who had heard about a class where the teacher showed his students cartoons of the Prophet Mohammed, beheaded Paty with a knife. 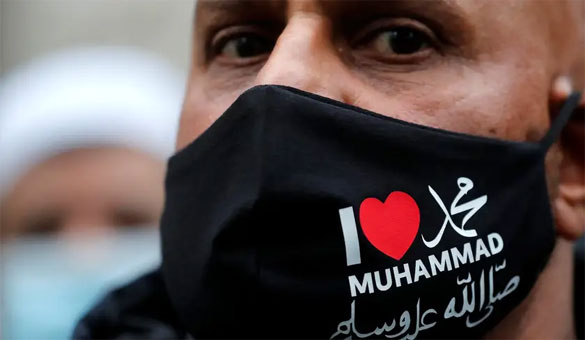 A protester wearing a face mask outside the French embassy in London, Friday, Oct. 30, 2020, to protest against French President Macron. Credit: Frank Augstein,AP

And sadly, this murder was so expected, not only because of the circumstances that led up to it – the cartoons that the 47-year-old civics and history teacher showed his class. The conflict between Paty and Anzorov is a long-standing, intergenerational and intercultural conflict. It’s not just the clash between the immigrants and the native-born French, or between Islam on one side and secularism and the values of democracy on the other.

This is a principled and focused conflict that raises its violent head when Islam is confronted with questions, challenges and moral dilemmas involving values and principles for which there is no solution at the moment.

Accordingly, it is important to state: The claim that Islam and Muslims are two distinct entities is perhaps partly true, but it’s  hollow because it does not deal with any challenge of morality and values with which Islam is grappling. And it does not provide adequate answers to complex traditional religious issues. 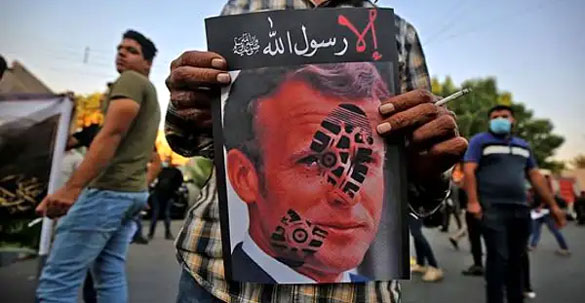 A protester carrying a defaced poster of Emmanuel Macron after the French president vowed not to "give up cartoons" depicting the Prophet Mohammed, Baghdad, October 26, 2020.

The murder Anzorov committed, the October 29 killings in Nice and the murders that continue to rage in the name of Islam leave no room between the perpetrators’ identities and the Koranic texts because these deeds rest on religious discourse or legal interpretations that have provided direct or indirect legitimacy.

Both Acts The Same Value

The reaction by the elite Islamic center of learning in Cairo, Al-Azhar, was the classic example of a supreme religious institution narrowing the gap between religious law’s texts and the people behind them – that is, male Muslims. Al-Azhar, the religious-male mouthpiece, deplored the murder, of course, but in the same document and same breath noted that the showing of the cartoons was an insult to Islam.

Al-Azhar gave both acts the same value despite the huge difference, from the perspectives of criminality and morality, between showing a cartoon and beheading an innocent man. Al-Azhar thus indirectly legitimized murder and in a sense authorized future murders.

If we look closely at this murder and others, like the Charlie Hebdo killings in 2015, we’ll find that not only was there a punishment, there was a total physical destruction of the source of the threat. In this sense, the representatives of Islam and its spokespeople in the West have one answer to criticism and dilemmas of morality and values – death. 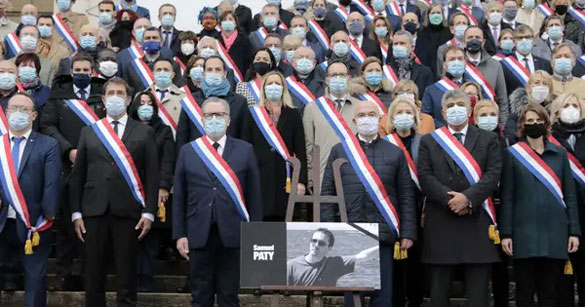 The message that Paty’s murder sent the Western world was that Islam is resistant to any criticism, and any trespass will exact a steep price. The murders that raged for around a week in a number of French cities, in part on the heels of President Emmanuel Macron’s statements, clearly show that the dominant Islamic discourse and many of its defenders are panicking and hysterical. And this discourse is playing the victim and defensive.

Playing the victim leads to defensiveness, and the defensiveness leads to one single “Islamic” reaction. The danger lies not only in Islam’s playing the victim and the violent reactions that are disproportionate to the allegedly anti-Islam acts. The message is that Islam is trying to preserve itself and maintain its borders, and has no interest in negative Western influences.

Islam aims to exist in the West in its original conservative version, with no interaction with the West's institutions, mechanisms and values. And, from Muslims who live in the West, it demands total loyalty, one that takes precedence over Muslims’ civic identity.

Thus, Al-Azhar’s controversial stance has left a religious and social vacuum into which have flocked second-rate clerics, all kinds of inciters, influencers and ordinary people who have been dragged along by the language of incitement that demands an immediate response to the insult to the religion.

The legitimation of the murder took place on social media as the followers and responders saw fit, without any basis in religious law. Meanwhile, they made populist use of the hadiths, the interpretations of traditions relating to the Prophet Mohammed. Paty’s murder was a natural continuation of the incitement, but to many it was also the appropriate religious response to the insult to Islam.

Paty’s murder suited the image of punishment that existed in the collective consciousness of everyone insulted by his actions. Those in the Arab-Muslim world who have justified Paty’s murder are the same group that will attack and incite when criticism is expressed of its male national poets, exalted authors and clerics.

This hostility is led by men who have decided on their own and out of religious considerations that cartoons of the Prophet Mohammed constitute an attack on Islam and the Muslims. They’re the ones who initiated a viral campaign on social media in many Arab countries, as well as a campaign to boycott French-made products, and who have swept up Muslims throughout the Arab world.

I am sad to disappoint the majority of Muslim men, but many amazing Muslim women in the Arab world are studying complex issues of religion and values such as polygamy and its implications, martyrdom, jihad and laws of personal status and inheritance. Many Muslim women, at all levels, are fighting distortions of religious law that have been forced upon them and their daughters, so the cartoons of the Prophet are a marginal issue for them.

Many Muslim women will neither join nor collaborate with this hollow discourse that diverts religious and social discussion from the most important issues to the most trivial. Muslim women know exactly what is challenging and how to challenge the dominant Islamic discourse, to confront it with political Islam while ensuring the presence of progressive streams in Islam.

Cartoons? The hell with them.