Muslims ‘Must Change Perception about West’

Muhammad Robert Heft, a Canadian convert to Islam who became well known through his “Stop Terrorism” online campaign, has called upon Muslims not to treat people in the West as their enemies. “There are many Abu Talebs among them, they stand by us and do not support some of their governments’ foreign policies,” he said. In an exclusive interview with Arab News, he also urged Muslims living in Western countries to make substantial contributions to their societies. “I have never heard of a Muslim group building a hospital in Canada,” he pointed out. 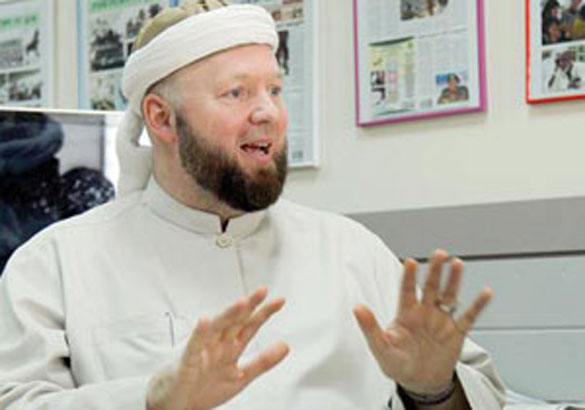 Heft, who is involved in bridge-building between government agencies and Muslim groups in Canada, said Muslims should live the message of their religion in order to change the stereotypes against them and impress other communities.

“We should be living the message. Not just giving the message. We should also think about how others look at us, and change ourselves to become good citizens and role models,” said Heft, who is president of P4E Paradise Forever support group.

“Prophet Muhammad (peace be upon him) had an uncle named Abu Taleb,” Heft said. “He was not a Muslim but was a staunch supporter of the Prophet. There are lots of people in the West who are just like Abu Taleb. We should not consider them as enemies and should not disappoint them through our wrongdoings.”

Asked about growing Islamophobia in the West, Heft said it could be contained by establishing strong contacts with governments, media organizations and people.

“Muslims should be involved in constructive activities, like building hospitals and protecting environment, in order to mobilize public support.”

Heft, who is engaged in deprogramming of extremists, was all praise about the Prince Muhammad bin Naif Counselling Centre that was instrumental in changing the mindset of hundreds of Saudi militants, and said he was looking forward to meet with its officials to exchange ideas and expertise.

Many Muslims have moved to America and Canada just to benefit financially and do not contribute to society, Heft said.

“When we come to a society we should be like a beautiful flower spreading fragrance in its surroundings.”

Heft called upon Muslim leaders and NGOs to engage non-Muslim politicians, intellectuals and media persons, explaining to them their cultural values and removing their misconceptions.

“When they know who we are, they will surely stand up for us,” he said.

Heft emphasized the need for Muslims to establish good relations with non-Muslim communities. “First, they are human beings and belong to the same creator. Second, there is a possibility that they may one day embrace Islam like me.”

A Protestant Christian of Irish origin, Heft embraced Islam in 1998 after which he studied the religion with qualified scholars for over seven years.

Since 2003, he has been taking part in a variety of government and community initiatives. He established P4E in 2005. A non-profit organization, P4E provides support to new Muslims, educates people on true Islam and challenges anti-Islam media campaigns. In 2008 he started “Stop Terrorism,” a global online cause with over 20,000 members.

Heft said it was the belief in the oneness of God that attracted him to Islam.

“I had a feeling that the concept of Jesus being God does not make any sense,” he said. “I could not perceive God in the form of a human being, eating and drinking like us. God should be great and beyond all human features and weaknesses.”

It was a Palestinian named Hosam Taha who ignited Heft’s mind to think about Islam. After watching a cross on his neck, Taha told him that Jesus (peace be upon him) would not be his saviour. “I went back and spent three days of thinking to convert him to Christianity. This led me to study more about Islam,” he explained.

Heft added: “Ours is the only religion that does not put God inside something. We don’t need God in a statue. Believe in God’s existence is the most important thing and it is quite reasonable. We don’t need to see God to believe in Him. God is beyond our comprehension and imagination. It was the glory of God that attracted me to Islam.”

Every product will have an owner’s manual and the Qur’an is the manual for man. When I was wrong trying to justify my desires, the Qur’an came to reassure me and guided me in the right path. Qur’an taught us the need to keep away from alcohol, by pointing to the fact that its demerits are more than its merits.

He said the number of Muslim families in Milton has increased from six to 1,000 during the past 10 years. “We are now in the process of building a mosque in the city.”

The International Association of New Muslims, an affiliate of the Makkah-based Muslim World League, is supporting the project. Heft was instrumental in connecting Canadian government agencies and Muslim groups. In December he arranged a meeting between the Royal Canadian Mounted Police with Muslim groups, which was attended by more than 25,000 people. It helped Muslims to express their concerns on issues such as arrests of youths, Islamophobia and tapping of information from phones and e-mails.

Heft advised Muslim groups in other countries to establish similar contacts with government agencies to exchange views and concerns, saying it would have a great impact on security and community welfare.

He said he had received an invitation from the US to advise its agencies on community outreach programs.

Heft called upon Muslims to get rid of their preconceived notions about Western people.

“We should not look at others with a preconceived notion, whether they are in Canada, US or Israel. There are good people everywhere. The vast majority of people in the world are in the middle ground.”

The Canadian Muslim leader opposed wars and conflicts and called upon Muslims to work for global peace. “War will not take us anywhere. War is a loser for both sides.” Heft, however, would not consider American attacks on Afghanistan and Iraq as crusades. “America aims to protect its national interests. Some people say America has no friends, only interests.”

He said a number of proxy wars are going on around the world. “Look at Syria it’s like a war between Russia and US. In this proxy war more than 60,000, mostly civilians, have died in Russia’s attempt to protect its last stronghold in the Middle East. It appears Muslim blood is cheap.”

Heft opposed prayers against non-Muslims at mosques. “By doing that we are condemning human beings, who are either potential Muslims or Abu Talebs. We should know that Omar bin Khattab, who had buried his own daughter, embraced Islam and became the second Caliph. So, there is possibility that people may change. We think that we have a special relationship with Allah but we should understand that we are far from God and His teachings. If we were close to Him we would have spent more time on how to improve ourselves,” he pointed out.

Heft added: “We have to change ourselves and work together as a community. We should think about the Prophet’s saying, “An Arab has no superiority over a non-Arab nor a non-Arab has any superiority over an Arab; also a white has no superiority over black nor a black has any superiority over white except by piety and good action. These are great words and a lesson for Muslims in the Middle East. We talk about implementing Shariah, at the same time we do not treat our women properly and do not pay wages to our workers. Just being born in the religion will not serve the purpose and will not take us to the Paradise. We should practice our religion.” He also criticized some Muslim clerics for wrongly interpreting the Qur’an and Hadith to suit their extreme views.”

He urged Muslims to improve themselves before criticizing other communities. “When we criticize the Western society, we should know whether we have a 100 percent best Islamic society to show them. We are more than a billion Muslims and they ask where our example is? We don’t have anything to show them. That is how they are judging and it’s fair enough and they are right. So before we tell them all the wrongs they are doing, we should change ourselves from our children, home, neighbourhood and society.

Heft stressed the importance of explaining to Western people some of the Islamic values and teachings to avoid embarrassment and misunderstandings.

“Many Muslims do not shake hands with other women. It will be embarrassing for a Western woman if she does not know Islamic teachings, so we should explain to her why you did not shake hands with her. We should tell her that we honor her as a woman and that Islam has a principle that we should not touch other women. If we tell her this in a nice way it will have a big impact and she will understand our culture.”

Heft also spoke about his efforts to deprogram extremists. “Many Muslim youths feel emotional about what is happening to their brethren around the world including Syria and Afghanistan, Iraq and Chechnya. They are also very passionate about many things like education and we have to engage them and channel their energy to something productive. We should not look at world on a micro level and take the world as whole and try to accommodate others and listen to their views. Our interfaith dialogue forums have been instrumental in bringing people of different faiths closer and remove their misunderstandings.”