There’s a famous scene from The Dark Knight in which the Joker gives a rare insight into why he does his disruptive, anarchic things. “I’m like a dog chasing cars,” he says, “I wouldn’t know what to do if I caught one, you know, I just do … things.” There is a certain Middle Eastern prince whose actions can be most accurately explained by this philosophy. A combination of an indulged upbringing, complete unaccountability and vast sovereign wealth has created in Saudi crown prince Mohammed bin Salman (commonly known as MBS) a sort of anarchic, comic-book villain. 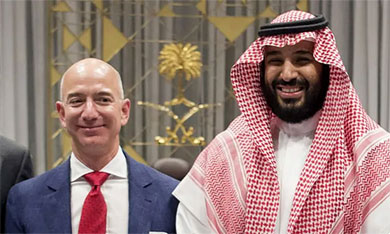 There was the botched murder of the journalist Jamal Khashoggi, whose killing not only occurred in a bugged embassy but one where CCTV caught his murderers (who had used their real passports, with their real names) attempting to use a body double in his clothes. But the latest instalment is the allegation that MBS hacked Jeff Bezos’s phone via a link sent on a WhatsApp message, and extracted a mass of personal information. With no attempt at subtlety or covering his tracks, MBS targeted the world’s richest person. We may have MBS to thank for the leak of Bezos’s messages to his lover, a leak that was then reportedly followed by attempts to blackmail the Amazon chief.

But what exactly was MBS looking for? Was it a vindictive strike back against criticism of the prince in the Washington Post, the paper Khashoggi wrote for and which Bezos owns? Was MBS trying to gain some leverage against Bezos? Yet Khashoggi was by no means the most vocal opponent of the Saudi royal family. Why would MBS, a man keen to present himself as a reformer, risk so much international incrimination, such reputational damage, to silence one of the most high-profile Saudis in the western press for nothing more than mild criticism?

The answer is, because over a lifetime of impunity he has grown accustomed to satisfying every whim. In terms of sons of autocrats, MBS is less Bashar al-Assad, Syria’s despot, who inherited power from his equally brutal father, Hafez, and more Uday Hussein, the famously erratic son of Saddam, who was reputed to have murdered those who caused the most minor offence to him, even among presidential loyalists and his own brothers-in-law. MBS initially consolidated his position by purging friends and family in an “anti-corruption drive”. His calamitous campaign in Yemen, launched when he was made minister of defence in his 20s and now a quagmire for the Saudis, was less a calculated defensive manoeuvre and more an immature power move.

Aside from those internationally notorious incidents and military adventurism, MBS’s elevation to de facto ruler of Saudi Arabia has introduced dark palace intrigue. Last September, a high-profile and famously loyal bodyguard to his father, King Salman, was shot and killed, apparently over a “personal dispute” with a friend. Rumours began to circulate that the death was a result of the unhappiness of the old security establishment with MBS’s capricious behaviour.

Disruption for the sake of it is now a hallmark of Saudi propaganda and online activity. Already an army of Twitter trolls has been activated to attack Bezos and call for a boycott of Amazon to “teach Bezos a lesson he won’t forget” if he does not apologise for alleging that MBS hacked his phone. Last year Twitter suspended 90,000 accounts used to intimidate those who criticised the royal family, and mass-tweeted hashtags glorifying the crown prince. After writing critically about the Saudi royal family, I myself have often been targeted online by identikit Saudi government loyalist accounts claiming I was receiving funding from Qatar.

There is no grand masterplan to this online campaign, nor indeed to Saudi’s PR effort as a whole, apart from throwing tantrums at those who point out that perhaps all is not quite together at the heart of the Saudi royal establishment. The hissy-fit model of making friends and influencing people is in keeping with the crown prince’s entitled-adolescent style of foreign relations. It is based on avarice, and frustration that not everything can be bought. On trips to the United States, MBS has secured meetings with Silicon Valley royalty, such as Mark Zuckerberg and Bezos himself.

It is, overall, a pattern of behaviour that is making it increasingly hard for western allies to continue painting Saudi Arabia as a competent ally in the region. Western foreign policy has for a long time hinged on a stereotype of regional polarity, with Iran as the unbalanced, evil uranium-enriching twin and Saudi Arabia as the balancing responsible actor, one that is important to keep on side and to support in order to maintain stability in the region.

This was always a fiction, but it is one that is now harder to keep up as the crown prince continues to prove that there is no adult in the room. The latest reports are that Boris Johnson has been bombarded with emoji messages from MBS on WhatsApp – putting the prime minister in the position of trying to figure out if he’s been hacked, or if MBS is merely fond of communicating via pictures and not words. As ever, this has also been leaked to the press: MBS seems to think that because there is no functioning media in Saudi Arabia, there is none elsewhere.

What sets MBS apart is not cunning design: it is chaos based on whim, executed via a toy box of tools. In fact, perhaps I should revise my earlier comparison. He lacks the intelligence and cunning of a Joker. He is more Scooby-Doo villain than clever arch-nemesis. The only thing Mohammed bin Salman does as consistently as violating international norms is doing so in such a clumsy, traceable way that he is always caught.